The strangest stowaways yet have arrived on U.S. shores via debris possibly from the 2011 Japan tsunami: Live fish.

The fish, which live off the coast of Japan and Hawaii, apparently made their way across the Pacific in a drifting 18-foot (5.5 meter) skiff. Of the five fish that made the journey, one is still alive and is being kept at the Seaside Aquarium in Oregon.

"These fish could have been originally from Japanese waters, or they could have been picked up going close by the Hawaii coast," said Allen Pleus, the aquatic invasive species coordinator at the Washington Department of Fish and Wildlife.

This is the first time live vertebrates (animals with backbones) have been found in tsunami debris.

When the devastating tsunami hit Japan in March 2011, it dragged some 5 million tons of debris into the Pacific Ocean, according to Japanese government estimates. Most of this likely sunk immediately, but approximately 1.5 million tons floated away from Japan's coastlines.

No one knows how much of that is still adrift, but pieces of tsunami debris have been washing ashore in Alaska, British Columbia and along the U.S. West Coast and Hawaiian islands ever since. Some of this debris has harbored potential invasive species, most notably two floating docks that beached in Washington and Oregon. [Images: Tsunami Dock in Remote Washington]

But those docks held plant life and invertebrates such as limpets and barnacles. Fish, much less live ones, are a rare find. The fish were found in a back compartment of a small fiberglass boat called the Saisho-Maru, which was discovered March 22 near Long Beach, Wash.

The Japanese government has not yet confirmed that the skiff was lost in the tsunami, but it has a registration number from the region where the wave hit, Pleus told LiveScience. The boat floated partially submerged with its stern a few feet under the ocean's surface, and the lidless compartment became a "little cave" where the fish could hide, Pleus said.

The boat also hosted algae, several crabs, marine worms, a sea cucumber (never found before on other debris, Pleus said), scallops and blue mussels. All told, it was a perfect mini-ecosystem for the stowaway fish. [See images of the stowaway species]

"In this particular case, the water conditions were right and the boat landed upright and was basically washed ashore," Pleus said. "It had a nice 20- to 30-gallon aquarium intact in the back."

A local found the boat and scooped up one of the fish, taking it to Long Beach's City Hall. City officials got in touch with Washington Fish and Wildlife biologists, who euthanized the rest of the fish for study. The survivor stayed at city hall until officials there called in Keith Chandler, the general manager of the Seaside Aquarium in Seaside, Ore.

The 5-inch-long (12 centimeters) fish "was in a bucket in their office, and they didn't know what to do with it," Chandler told LiveScience.

Chandler identified the fish as a striped beakfish (Oplegnathus fasciatus), also known as a barred knifejaw. Striped beakfish live in reefs off Japan and are rarely spotted in other tropical waters. 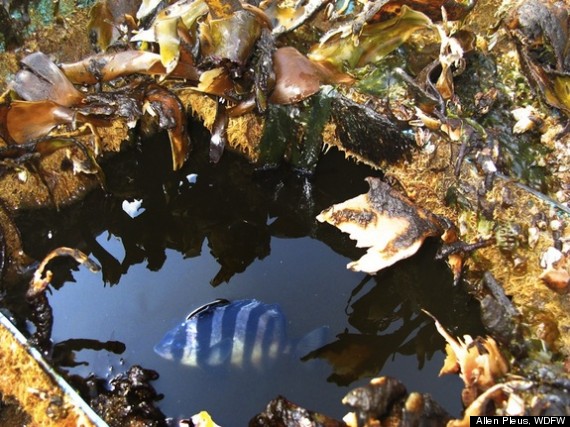 A submerged compartment in the back of the boat provided a refuge for five striped beakfish. Image credit: Allen Pleus (WDFW)

The surviving fish is now in a quarantine tank at the Seaside Aquarium, where staff are trying to get it to eat, Chandler said. He's hoping to put the fish on display with permission from Oregon's Department of Fish and Wildlife.

"We're trying different things to feed it," he said.

The rest of the fish were sent to Oregon State University, where biologists will analyze their ear bones to determine their age and also look at their stomach contents and reproductive status.

"The reproductive status and age will help us figure out if they rode the entire way from Japan starting over 2 years ago, or most likely they came from Hawaii," Pleus said. Even from Hawaii, the fish would have survived a journey of nearly 3,000 miles (4,828 km). [Tracking Japan's Tsunami Debris (Infographic)]

It's unlikely that any fish that escaped the boat will survive in the cool waters off the Washington and Oregon coastlines, Pleus said. Had the boat landed further south, it's possible the fish could have established themselves.

The fish discovery changes the way biologists will have to think about invasive species from Japanese debris, Pleus said. At first, scientists assumed that no species would survive a more than 5,000-mile (8,047 km) journey across the Pacific. When the docks laden with marine life washed up in Washington and Oregon, they realized they were wrong.

But researchers still thought that to support life, an object would have had to have been sitting in the water, accumulating an ecosystem, before the tsunami hit. The newly discovered skiff and other small finds suggest this isn't the case, Pleus said.

"A lot of these species were attached after the tsunami, while it was still in Japanese coastal waters," he said. "There are a lot of larvae that are floating around looking for something solid to attach to."

Finally, researchers have believed that only big objects, such as docks, could support enough life to support a robust colony, Pleus said. The boat torpedoes that theory, too.

"You get these sort of Noah's Arks of large docks that come in with huge assemblages of species, and they're definitely a threat," he said. "But when you look at the number of smaller debris with fewer organisms, if you put it all together, it's an equal or possibly even greater threat than the really large objects that come to shore."

2011 Tsunami Debris: Fish Found Inside Skiff That May Have Crossed Pacific After Japan Tragedy
Tsunami Debris 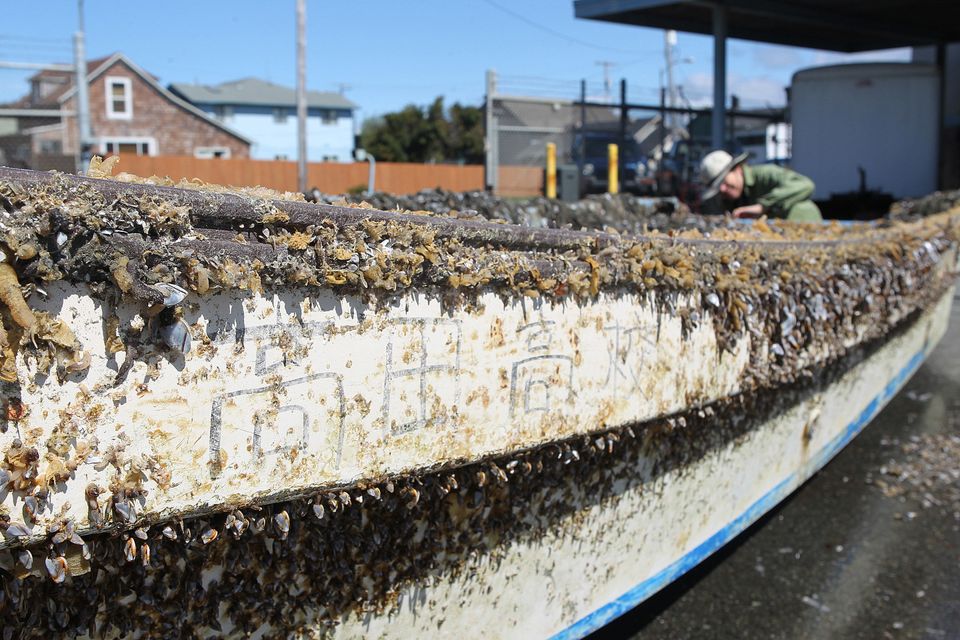