It’s official: 2012 was the warmest year on record in the lower 48 states, as the country experienced blistering spring and summer heat, tinderbox fire weather conditions amid a widespread drought, and one of the worst storms to ever strike the Mid-Atlantic and Northeast.

According to the National Oceanic and Atmospheric Administration (NOAA), 2012 had an average temperature of 55.3°F, which eclipsed 1998, the previous record holder, by 1°F. That was just off Climate Central’s calculation in mid-December, which projected an expected value of 55.34°F, based on historical data.

The 1°F difference from 1998 is an unusually large margin, considering that annual temperature records are typically broken by just tenths of a degree Fahrenheit. In fact, the entire range between the coldest year on record, which occurred in 1917, and the previous record warm year of 1998 was just 4.2°F.

The year consisted of the fourth-warmest winter, the warmest spring, second-warmest summer, and a warmer-than-average fall. With an average temperature that was 3.6°F above average, July became the hottest month ever recorded in the contiguous U.S. The average springtime temperature in the lower 48 was so far above the 1901-2000 average — 5.2°F, to be exact — that the country set a record for the largest temperature departure for any season on record.

"Climate change has had a role in this [record],” said Jake Crouch, a climate scientist at NOAA's National Climatic Data Center in Asheville, N.C. He said it isn't clear yet exactly how much of the temperature record was due to climate change compared to natural variability, but that it's unlikely such a record would have occurred without the long-term warming trend caused in large part by emissions of greenhouse gases.

During the summer, nearly 100 million people experienced 10 or more days with temperatures greater than 100°F, which is about one-third of the nation’s population, NOAA reported. 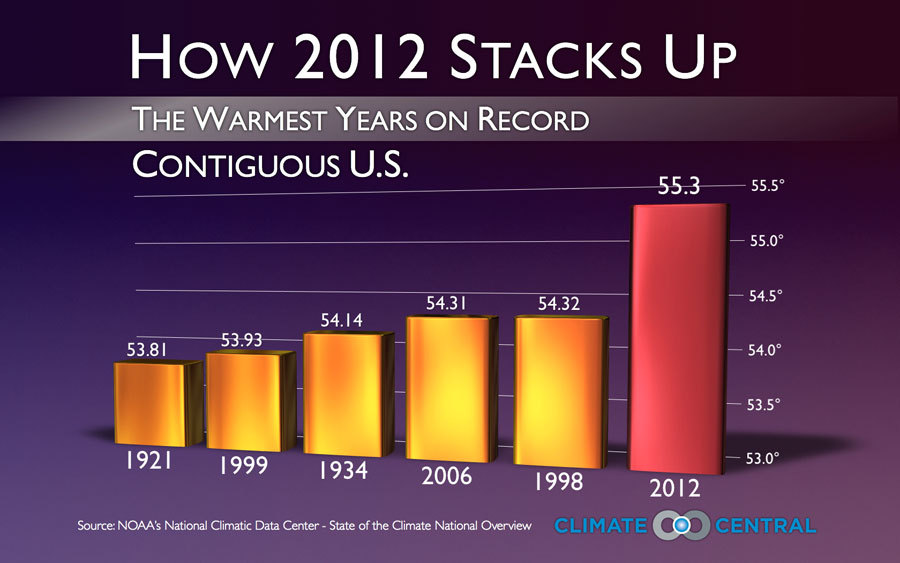 As the climate has warmed during the past several decades, there has been a growing imbalance between record daily high temperatures in the contiguous U.S. and record daily lows. A study published in 2009 found that rather than a 1-to-1 ratio, as would be expected if the climate were not warming, the ratio has been closer to 2-to-1 in favor of warm temperature records during the past decade (2000-2009). This finding cannot be explained by natural climate variability alone, the study found, and is instead consistent with global warming.

Driven largely by the warm temperatures and the massive drought, one measure of extreme weather conditions, known as the Climate Extremes Index, shows that it was the second-most extreme year on record, second only to 1998. Studies show that in response to global warming, some extreme events, such as heat waves, are already becoming more likely to occur and more intense.

Nineteen states had their warmest year on record in 2012, mainly in the Plains and Midwest, where summer heat and drought was the most intense. An additional 26 states had one of their top 10 warmest years on record. Remarkably, every state in the lower 48 experienced an above-average annual temperature.

The extreme heat is even more vivid when examined at the local level. Cities such as New York, Boston, Washington, Milwaukee, St. Louis, Denver, Des Moines, and Chicago all set records for their warmest year.

In Des Moines, which set a record for its warmest year smashing the old 1931 record by 1.5°F, it was the first year not to reach 0°F. In addition, March had the largest monthly temperature departure from average of any month on record there, coming in at 16.4°F above average. 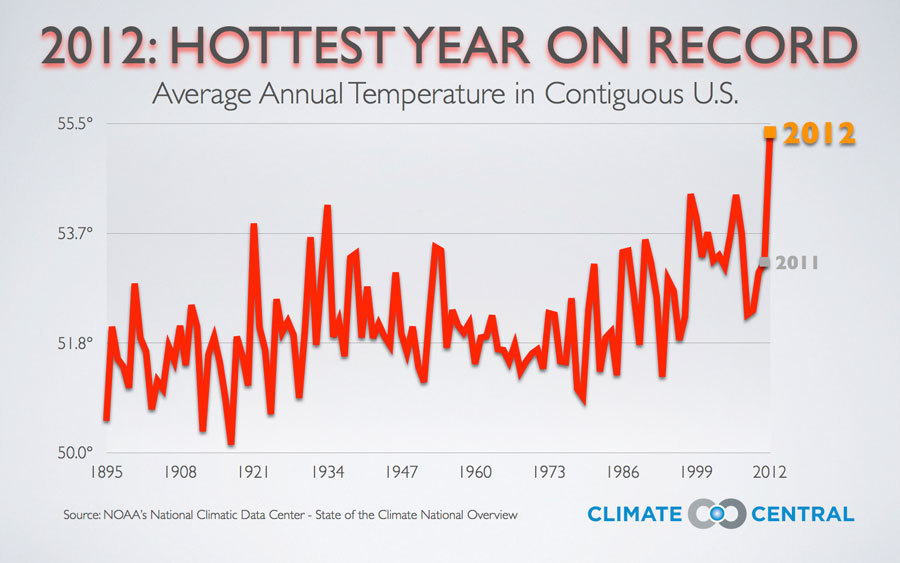 The year was also characterized by extreme drought, and two states — Nebraska and Wyoming — also had their driest year on record. Eight more states had annual precipitation totals that ranked in the bottom 10.

At its maximum extent in July, drought conditions encompassed 61 percent of the nation, with the most intense conditions in the Great Plains, West, and Midwest. The nationally averaged annual precipitation total was 2.57 inches below average, making 2012 the 15th-driest year, and the driest year since 1988, which also featured a major drought.

The drought of 2011-12, which is still ongoing, is comparable in size to severe droughts that occurred in the 1950s, and is already being blamed for more than $35 billion in crop losses alone, according to the reinsurance company Aon Benfield. In fact, it’s quite possible that damage from the drought will eclipse the total bill from Hurricane Sandy, which some estimates place at more than $100 billion. Overall, the drought could end up robbing the limping U.S. economy’s GDP of a full percentage point, said Deutsche Bank Securities.

The drought was instigated in large part of very low snow cover and warm temperatures during the winter of 2011, and record warmth during the spring, which allowed for an early start to the growing season and depleted soil moisture earlier than normal. The record March heat wave put the drought into overdrive, accelerating its development across the Plains and Midwest in particular.

The drought conditions created ideal conditions for wildfires, as 9.2 million acres went up in smoke in the West, the third-highest on record.

The same weather patterns that led to the drought helped suppress severe thunderstorms and tornadoes, with a final tornado count that is likely to be under 1,000, which would be the fewest twisters since 2002.

According to NOAA, the year saw 11 natural disasters that cost at least $1 billion in losses, including Hurricane Sandy, which struck the Mid-Atlantic and Northeast on October 29-30.

Globally, 2012 is expected to be ranked as the eighth-warmest year on record, with that announcement coming later in the month.