The huge new disaster movie 2012 opens this Friday. Everyone but HuffPost blogger John Cusack drowns, but not before a statue of Jesus crumbles, a crack opens in the Sistine Chapel roof -- right between the fingers of God and Adam -- and St. Peter's Basilica falls over on a lot of Italians. These images have offended the usual people in the I'm Offended Industry, but not for the reason you'd think.

The offense takers are offended because 2012 forgot to offend any Muslims.

Here's Greg Gutfeld, who used to be a HuffPost blogger and now has a public access TV show:

But there was one thing missing among

the carnage: an Islamic target...

In an interview, the director (Roland Emmerich) said he hoped to destroy the Kaaba, an Islamic holy site, but his fellow screenwriter Harald Kloser persuaded him not to.

Here's what the hack had to say about crushing the Kaaba:

"Well, I wanted to do that... but my co-writer Harald said I will not have a fatwa on my head because of a movie..."

Hollywood screws with Christians because Christians don't behead people. But tweak Islam, and you could end up like director Theo van Gogh -- dead on a street with a flag impaled on your chest.

Not what "impaled" means. But a frightening image, anyway. A man lying dead, with his chest sticking through a flag.

If there's one thing Greg Gutfeld hates more than anti-Christianity, it's hacks, with their bad writing.

Bill Donohue, a divorced shakedown artist with no professional ties to any church, frequently appears on television as "president and CEO" of the "Catholic League for Religious and Civil Rights." He's also available for parties and boycotts. He says:

Emmerich is more than a coward -- he is a liar who has it out for Catholics. Last year, he was quoted saying, "I would like to erase all nations and religions." Not true. He is quite content to live with Islam, even though he readily admits it is a religion of terror...

Every time I say Hollywood hates Christianity, especially Catholicism, my critics cringe. But they never offer evidence that I'm wrong.

I'll bet that's not the only time Bill Donahue gets the cringing thing.

I'm sorry Bill Donahue's having such a bad time on Earth. Wait till he gets to Hell. Simonists are ever less comfortable there.

In a column for The Christian Post, Chuck Colson, an elderly jailbird, says the deeper problem with 2012 is that "Western culture might have lost its faith, but folks have not lost their anxieties." That's why we turn to "new-age versions of these faiths." Like "the environment" and "global warming."

And there you were, thinking the worst thing about 2012 was going to be that Adam Lambert song.

They're missing the point, of course. The reason Roland Emmerich chose Catholic icons to destroy is out of respect for Catholicism. Because even a guy who could ruin the Godzilla franchise knows that Catholicism means real religion, and everything else is sort of silly.

Chesterton asks us to imagine blaspheming Odin. You can't. You'd just sound like a dope.

Or as Lenny Bruce said:

The only "The" religion, actually, is Catholicism. I mean, as far as strength. Paramhansa Yogananda's cute, but The Church, that's it. 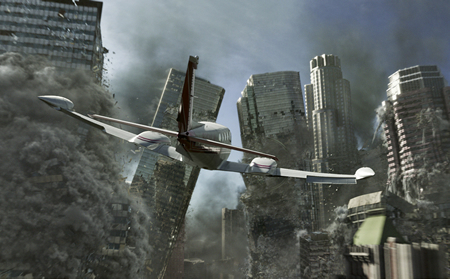 Oh fun. The plane's about to crash into those twin skyscrapers.

And look over on the right. First there's the Library Tower. (Or as George Bush, America's Greg Gutfeld called it, "The Liberty Tower.") It was destroyed by Ronald Emmerich in Independence Day and was identified by the Kean Commission as the fifth target on 9/11.

Now look at the building to the far right. The earthquake is the least of its problems. See the three explosions blowing out the windows of its lower floors? Oh my God! It's being imploded by a controlled demolition!