WASHINGTON -- President Barack Obama continues to hold narrow leads in a handful of battleground states that will likely decide the election, but some argue that Republican nominee Mitt Romney will come out on top because Obama's poll totals linger just below 50 percent.

The arguments are based on what campaign pollsters used to call the "incumbent rule," the idea that when an officeholder seeks reelection, undecided voters would break decisively to challengers in the final days of the campaign. The problem is that such late shifts have become increasingly rare. They may never have been much of a factor in close presidential races and show few empirical signs of occurring among the undecided voters of 2012.

But that does not stop many pundits from saying that Obama poll results a few percentage points under 50 percent are a sign of impending peril. Writing in The Wall Street Journal on Wednesday, for example, Karl Rove argued that the polling "number that may matter most is Mr. Obama's 47.2% share" of the vote, the number Rove gets when he averages 31 recent national surveys. "As the incumbent, Rove wrote, Obama is "likely to find that number going into Election Day is a percentage point or so below what he gets."

Ironically, eight years ago, I made the same argument about Rove's boss, President George W. Bush, along with several Democrats. Compilations of public polls showed that during the 1980s and 1990s, polling in statewide contests had followed the pattern that Rove and others cite today.

With Bush hovering at 47 percent to 48 percent of the vote on the RealClearPolitics average for much of October 2004 and Kerry at 46 percent, it seemed as if the typical "break" among the undecided might give the Democrat enough of a boost to close the gap.

But it didn't happen. Even though Rove cited 2004 as a proof point, Kerry got little or no net boost from his standings in the late polls. Bush led Kerry by 2.4 percentage points (48.4 percent to 46.1 percent) on the Real Clear Politics average eight years ago, on the Thursday before the election, the same margin by which he defeated Kerry on Election Day (50.7 percent to 48.3 percent)..

As the dust cleared and another election cycle or two passed, it became clear that the pattern of late-breaking undecideds previously evident in statewide contests had already started to fade in the elections of 2000 and 2002 and all but disappeared after that. When The New York Times' Nate Silver examined polls from 1998 to 2009, he found no evidence that "the majority of the undecided vote broke against the incumbents." His advice: "Focus on the margin between the candidates, just as you might instinctively do."

Why the change? Pollsters speculate that the the incumbent rule disappeared because of a change in the nature of campaigns since the '80s and '90s. Incumbent candidates have grown increasingly aggressive and are now far more willing to attack challengers early and often, so voters are making their decisions sooner and often on the basis of negative information about challengers.

More recent research also helps redefine our understanding of the incumbent rule in the context of presidential elections. In their book, The Timeline of Presidential Elections, political scientists Robert Erikson and Christopher Wlezien examined national polls since 1952 and found that the pattern was less about incumbents than about front-runners. As illustrated in the chart below, which compares the averages of polls conducted in the final week of the campaign to the final results, Erikson and Wiezien found that "leads shrink for whichever candidate is in the lead (usually the incumbent party candidate) rather than that voters trend specifically against the incumbent candidate." 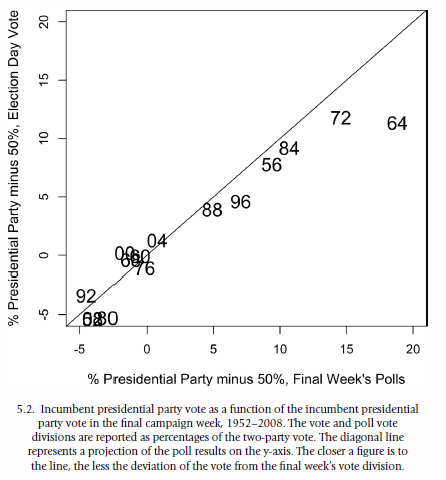 Perhaps more important, as Erikson and Wlezien explained, "when the final polls are close to 50-50, there is no evident inflation of incumbent party support in the polls."

Eight years ago, while this reporter and others speculated about what history might predict about how the undecideds might "break," the analysts at the Pew Research Center took a different approach. They measured the attitudes of undecided voters. Specifically, they examined the split of the respondents who needed to be prodded to say which way they "leaned" in voting. They also did a regression analysis, based on various questions in their survey, to predict which candidate would ultimately be chosen by voters who were truly undecided.

On the basis of the measurements, on the weekend before the 2004 election, Pew Research reported that "the remaining undecided vote may break only slightly in Kerry's favor." The final Pew poll showed 48 percent for Bush, 45 percent for Kerry, 1 percent for Nader and 6 percent undecided. Pew allocated the undecided vote evenly, giving 3 percentage points each to Bush and Kerry, and thus achieved what turned out to be a perfect forecast of the ultimate 51 percent to 48 percent Bush margin.

In an interview two years later, Pew Research President Andrew Kohut attributed the 2004 success to a focus on survey measurement rather than ad-hoc judgment. Decisions such as those about how to allocate the undecided vote, he said, were "based upon measures. They're not based upon 'you know I think,' 'I got this feeling,' 'history tells us,' or any of this other stuff where you can let judgments get in your way."

Pew Research will share its assessment of this year's undecided voters in its final survey report over the weekend.

Meanwhile, political scientists John Sides and Lynn Vavreck, who have been closely following undecided voters all year, applied a similar approach this week. Sides analyzed 195 still undecided voters among the 3,000 respondents interviewed by YouGov in its opt-in Internet panel surveys since the first presidential debate. Sides applied several different approaches, but reached a consistent conclusion that undecided voters will split "fairly evenly" between Obama and Romney (Vavreck, focusing on a slightly larger data set, finds evidence that those who were initially undecided in December 2011 have split more in Obama's favor, particularly among women, since the party conventions).

Ultimately, the strongest reality check to the incumbent rule argument comes from Obama's standing in the battleground states. The current HuffPost Pollster estimates, based on all available public polls, give Obama 50 percent of the vote in Nevada and Wisconsin and 49 percent in Iowa and Ohio. If an incumbent will do "a percentage point or so" better on Election Day than in his final poll averages, as Karl Rove argued, Obama is on the verge of locking up electoral votes he needs to win.