WASHINGTON -- With the campaign between President Barack Obama and Republican presidential nominee Mitt Romney entering its final 10 days, interest in the pre-election polls is at an all-time high, with at least one high-profile pundit confessing to being a "pollaholic."

But for all the dissection of polling methods, one question continues to be a particular source of confusion: When is a lead really a lead?

The aggregate pattern of the national tracking polls continues to indicate a very close race for the national popular vote, with mostly random variation from day to day. The table below, which -- as of this writing -- shows the most recent release of seven daily tracking polls plus two more national surveys fielded in the last week, shows everything from a 2-point Obama edge to a 5-point Romney advantage (for the most recent updates of the daily trackers, see the HuffPost Pollster national tracking chart). 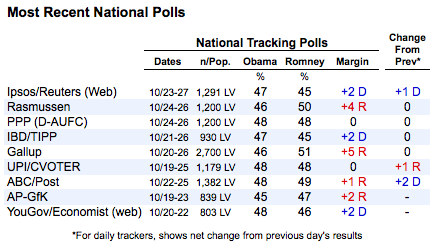 Keep in mind that since the national polls report margins of sampling error ranging from +/- 2 to +/- 4 on the estimate of support for each candidate, neither candidate's nominal leads on any of these polls can be considered statistically significant.

Seemingly non-random patterns sometimes appear in these daily numbers that may may seem to momentarily favor either Obama or Romney, but since early October these fluctuations have all proved to be little more than random noise. As is more typical, the most recent daily tracker updates, as of this writing, show no consistent pattern either way, with two ticking in Obama's favor, one in Romney's favor and four unchanged.

Since the contest will ultimately be decided by the electoral college votes determined by separate contests in individual states, many ask -- with good reason -- why we follow national polls at all? The most important reason is that the daily tracking surveys now interview more than 2,000 likely voters a day. They may differ on the level of support they measure for each candidate, but if a consistent trend emerges over the next 10 days, these surveys will likely detect it first.

The HuffPost Pollster tracking model, which combines both national and statewide polls to produce a combined estimate of the national popular vote, is our primary tool to help watch for such trends. But keep in mind that while aggregating polls greatly reduces the random noise associated with individual surveys, it does not eliminate it. The model produces what amounts to its own margin of error of roughly +/- 1.2 percentage points around each candidate's support.

As of this writing, the HuffPost Pollster model gives Romney a lead of 0.7 percentage points (47.4 to 46.8 percent), though that margin is not quite large enough to be considered a statistically significant.

At the state level, however, the recent polling does show statistically meaningful margins that have also been consistent since Romney gained support just after the first debate, and more than 20 new state surveys released since Friday morning have done little to change that. 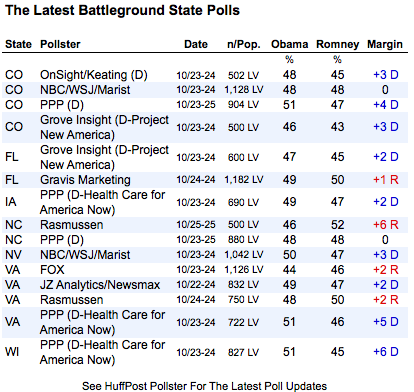 Three new polls of likely voters in Ohio released on Friday, for example, all give Obama edges ranging from 2 to 4 percentage points, bringing the total of new polls over the past week to give Obama a slight numerical edge in the state to six of seven. Again, considered in isolation, any one of these surveys would not indicate a statistically significant lead. But when combined by the Pollster tracking model, they give Obama a lead of roughly 2.5 percentage points in Ohio that the model considers statistically meaningful. 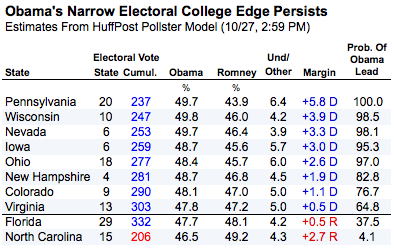 The overall standings produced by the aggregation of all of the public polls in the battleground states have been essentially unchanged for nearly three weeks. Although the margins have closed since the first debate and remain very close, Obama holds advantages of 2 percentage points or better in four states -- Ohio, Iowa, Nevada and Wisconsin -- that would combine with those favoring him by larger margins to give him 277 electoral votes, 7 more than needed for victory.

While the model currently reports high confidence in Obama's leads in those critical battleground states, it is important to remember the limitations of those statistics. They assume that the grand mean of all pollster measurements is unbiased, something that was true of the polling data in 2008 and 2004 but not as often before that. The confidence levels also tell us nothing about the possibility of trends that may develop over the next 10 days, such as whether those who are still undecided might "break" disproportionately toward one of the candidates as they cast their votes.

Since the overall numbers are so close, and since even the small errors or bias in the data could point to a different outcome, HuffPost Pollster will attempt over the next 10 days to review some of the leading theories about what the polls may be getting wrong. The point is to assess how much confidence these numbers should inspire in the real world. Stay tuned.