WASHINGTON -- Over the last two weeks, Republican presidential nominee Mitt Romney closed the gap on President Barack Obama in pre-election polls, but the sometimes inconsistent numbers have been confusing. Why do polls seem to be all over the place? And how could Romney be leading in some national polls while Obama holds an advantage in polling in the battleground states?

The inevitable variability in polling numbers is the source of much of the confusion. Collectively, the polls have been telling us that the race is very close and, as such, relatively small inconsistencies that we might otherwise ignore now loom large and help produce contradictory narratives.

Here are four things to remember to help make sense of it all:

Polls are always "all over the place."

Almost exactly four years ago, a Pew Research survey conducted over a four day period (Oct. 16-19, 2008) gave then-candidate Barack Obama a 14 percentage point lead (53 to 39 percent) over Republican rival John McCain among likely voters. A second poll conducted by the Associated Press and GfK over a nearly identical period (October 16-20) using very similar methods told a completely different story. The poll had Obama ahead by just one point (44 to 43 percent).

Other polls and the election result fell somewhere in between.

The lesson then and now is that polls are subject to a lot of potential error. Some is purely random variation due to interviewing a sample rather than all voters (typically reported as "margin of error"). Some are the result of the different methods pollsters use to collect data and select "likely voters."

The range of variation is visible in the pattern of dots in the HuffPollster chart below. Each dot represents the percentages in different polls. If you click to see just the dots for Romney or just the dots for Obama, you can see that the range of variation over the past few months has been about 6 or 7 percentage points (or the average +/- 3 to 4 percent). That range is about what we would expect from "the margin of error" alone.

The race is close enough that slight differences in numbers will appear to support very different narratives about the state of the race.

This is an important point. The substantive differences we care most about -- such as whether Obama or Romney is ahead nationally or in the crucial battleground states -- now depend on differences typically too small to be considered statistically significant in any one poll. Also, some may arguably lack real-world substantive significance even when all of the polling data is combined using a sophisticated statistical model like the one that powers the HuffPost Election Dashboard.

More specifically, as of this writing, the HuffPost Pollster estimate gives Romney an almost meaningless edge of just two tenths of 1 percent in the national popular vote, and Obama a slightly larger advantage (roughly two percentage points) in two key battleground states -- Ohio and Nevada -- that could put him over the 270 electoral votes needed to win.

Our model suggests that Obama's slim leads in the battleground states are statistically meaningful, but again, the substantive significance remains slight. We have seen shifts of more than a percentage point or two in recent weeks, and past elections have shown slight differences of this magnitude between polling averages and the outcome.

According to the HuffPost Pollster estimates, there is very little difference between the candidates' standings nationwide and in the battleground states.

Some national polls may have shown a larger gap, but a comparison based on the state-level Pollster poll tracking estimates fails to confirm those differences.

Again, as of this writing, our model gives Romney a tiny edge over Obama in the national popular vote (47.1 to 46.9 percent). If we create a weighted average of the battleground states (based on the number of votes cast in 2008 in each state), Obama has an advantage of roughly half a percentage point (47.7 to 47.2 percent) in the nine most closely contested battleground states (Colorado, Florida, Iowa, Nevada, New Hampshire, North Carolina, Ohio, Virginia and Wisconsin). 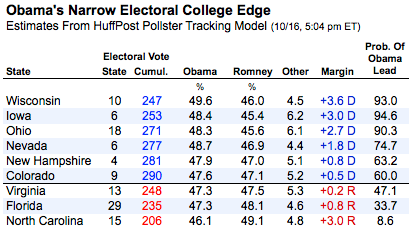 Obama holds nominal leads in more battleground states, but keep in mind that three that currently lean to Romney (Florida, North Carolina and Virginia) account for nearly half of the voters in these nine states.

Consistent with this finding, as Simon Jackman explains in a HuffPost Pollster blog post, is that the shifts from 2008 to the current polling snapshot have been largely consistent across the battleground states. 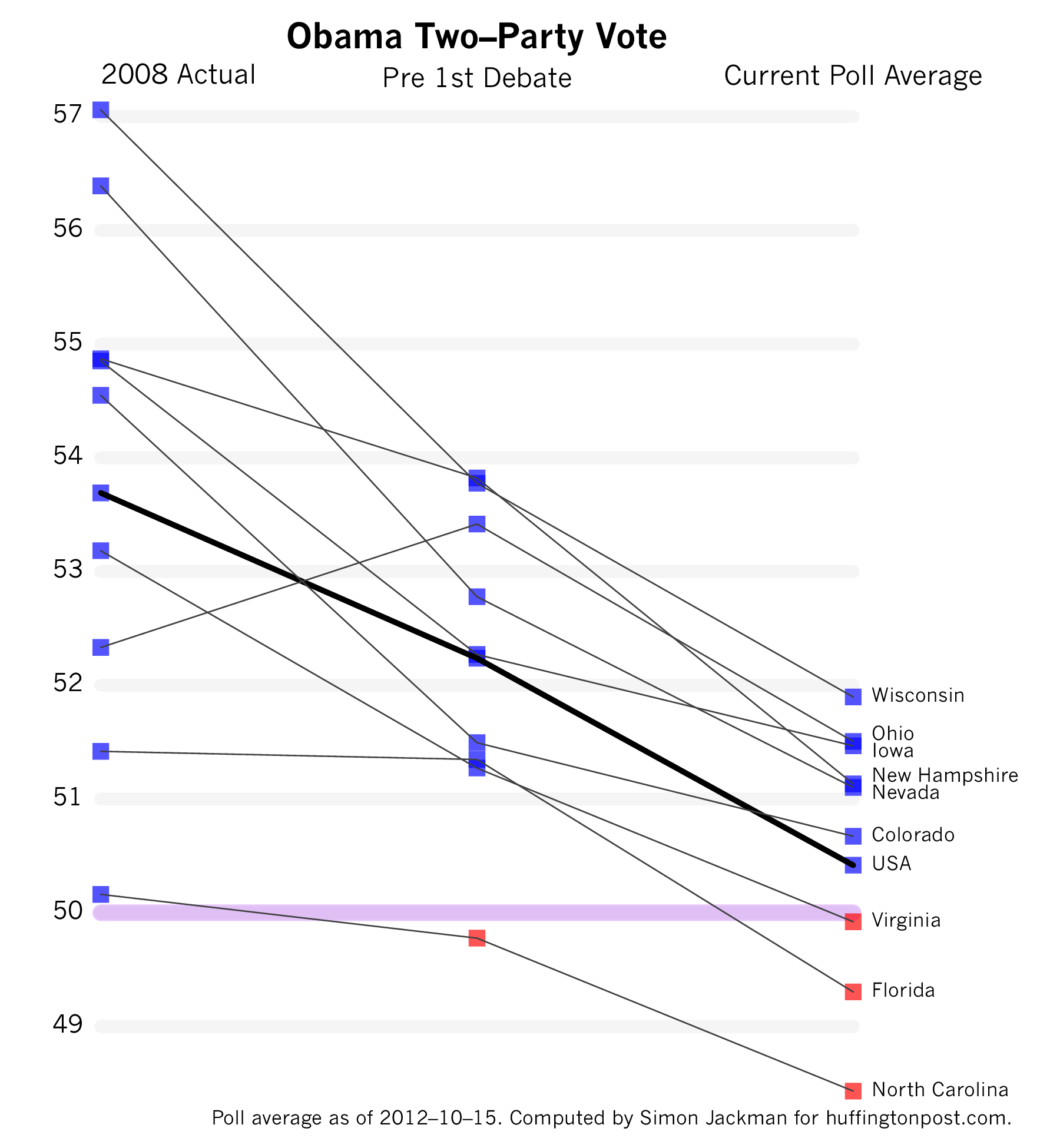 The one exception has been Ohio -- a state always considered critical by both campaigns -- which shows the smallest decline in Obama's vote since 2008. Whether that gap holds may well determine which candidate wins the election.

Any one poll may produce a very different "narrative" about where the race stands, both nationally and in the battleground states.

Take Monday's much discussed Gallup poll of swing states published in USA Today that showed Romney leading by four percentage points (50 to 46) in 12 swing states in interviews conducted as part of Gallup's national daily tracking poll Oct. 5-11. (Gallup defined the battleground states as the nine listed above, plus Michigan, New Mexico and Pennsylvania.)

A weighted average of the Pollster estimates in the same 12 states shows a different result. It gives Obama a roughly one and a half percentage point lead (48.1 to 46.6 percent) as of this writing.

and the potential range of results consistent with the Gallup poll includes the 1.6 percent Obama lead estimated in the same states by the Pollster mode.

The bottom line is that, on the eve of the second debate between Obama and Romney, the race for president is very, very close. The HuffPost Pollster model gives Romney a slim edge, but that is very much subject to change over the next three weeks.