If you've been suffering through the coverage of this week on the campaign trail, you've probably already figured out that this was the week when we learned about more women who claimed to have run afoul of what Herman Cain would call his "charms," and that everyone was super excited about that until the CNBC debate, when Rick Perry ended up completely flummoxed by the opportunity to count to three. In fact, we can represent all of that graphically, by making just a few adjustments to last week's visual guide to the race. 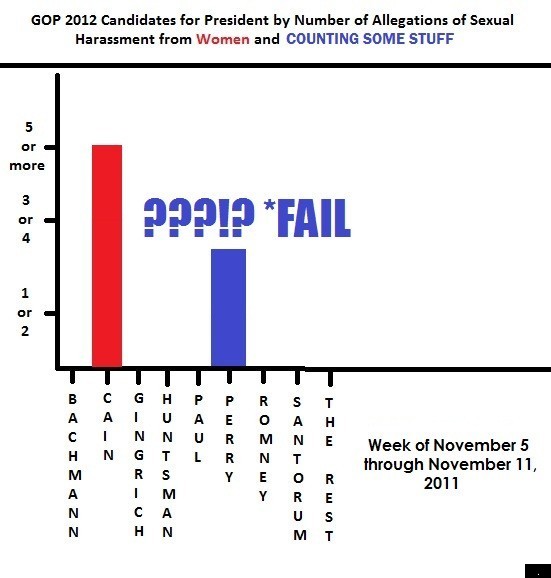 But the big difference between this week and last week was that this week, no one got handed a free pass because Herman Cain was putting out multiple fires. In fact, by week's end, the GOP landscape had almost completely inverted itself. The midweek CNBC debate put the rest of the field back in the spotlight and tasked with the mission of exploiting Cain's woes and pushing themselves forward in the race to be the alternative to Mitt Romney.

Most didn't make up much ground. Michele Bachmann hasn't found anything new to say about her candidacy in months. Jon Huntsman stowed away the lame quippiness that he's been using in previous debates to ingratiate himself and opted for a turn as the "adult in the room," but his calls for Wall Street reforms were pitched to the wrong audience. Rick Santorum, as usual, was the best debater in the room, but his presence at these festivities is now largely symbolic -- he's the throwback jersey for Team GOP.

Newt Gingrich ended up having the best of what was left, and this week moved into second place in the latest McClatchy-Marist poll. (Other recent polls have Cain as the leader, with Romney and Gingrich in a dead heat for second.) Congratulations go out to everyone who worked so hard. By which we mean, the media elites who sowed the seeds of the Gingrich-surge narrative. We aren't referring to the Gingrich campaign team -- they quit, remember?

And Rick Perry? Well, his 53-second brain fugue was just the sort of fortunate happenstance that Herman Cain needed. After 10 days of nonstop coverage of past accusations of sexual harassment, suddenly the media had something newer and shinier to play with, and Cain got a chance to breathe. And now, it's suddenly kind of okay to be Herman Cain again. Sure, one never knows how long that will last, but based on the way the debate audience supported Cain and derided the CNBC moderators for even bringing up his sexy allegations, it's reasonable to think that Cain's efforts to paint himself as the victim of a media drive-by-shooting have largely succeeded.

Nevertheless, Mitt Romney remains in the best possible position. He may have Cain and Gingrich nipping at his heels as far as polling numbers are concerned, but all that means is the two people he's fighting with are two people who, ultimately, are on high-concept book tours, not authentic runs for the White House. And the clearest sign that Romney is winning this thing is that President Obama and his political allies continue to train their fire at the former Massachusetts governor.

But this is just a bit of what happened this week on the campaign trail. Michele Bachmann proposed changing a piece of Americana. Gary Johnson said he'd ditch a presidential tradition to save taxpayer money. Barack Obama parted ways with a close confidant and a hunk of political deadweight. Ron Paul went off on the wealthy, Buddy Roemer took to Twitter, and Rick Santorum had pundits battling over "Why?" and "Why not?" And which candidate is disappointing Ezra Klein this week? To find out, please enter the Speculatron for the week of 11/11/11.