Following a notoriously active and deadly tornado year in 2011, the low number of tornadoes in 2012 may go down in the record books.

Severe weather has been unusually quiet since the spring. Even during the fall, when there is normally a secondary peak in severe weather, there was a lull. 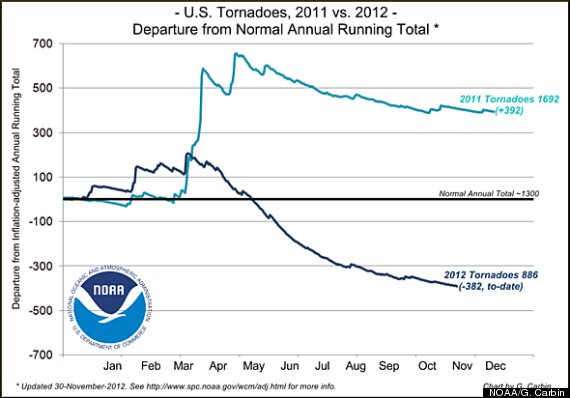 "We have not had a single severe weather report [in November], which is pretty staggering for this part of the world," Spann said. "I don't recall a November like this in at least 20 years."

Talking Numbers
The preliminary tornado count* in the U.S. for 2012 to date is around 1,060, according to the Storm Prediction Center. This is below the average number of annual tornadoes of around 1,300.

"I think this year as a whole might go down in the books for the lack of severe weather," Spann said.

1989 was the last year that there was less than 900 tornadoes in the U.S. with only 856 tornadoes reported, according to the SPC. Since then, the only year in which less than 1,000 tornadoes touched down was 2002.

AccuWeather Enterprise Solutions Senior Vice President Mike Smith agrees with Spann that this year may go down with one of the lowest tornado numbers in recorded history.

"The fact that we have this few tornadoes in the Doppler Radar era, in the era of storm chasing, that means it's been a very, very slow year," Smith said.

Before the Doppler Radar was developed, radar images were very crude and did not show enough detail to detect tornadoes. Doppler radar was developed early in the 70s, capturing the first tornado near Union City, Okla., on May 24, 1973, according to the National Oceanic and Atmospheric Administration.

Radar coverage was also sparse in the past. It was not until the early 1990s that a national network of NEXRAD Doppler radars was installed in the U.S.

The huge number of storm chasers across the U.S. also adds to a higher detection rate of tornadoes today.

"Back on May 29th, I chased a tornado, have pictures of it, but it was an F0 out in the middle of rangeland in western Kansas," Smith added. "That tornado would never have made it into the record books in the 50s or 60s. No one would have seen it."

Factors Behind Low Number of Tornadoes in 2012
In order to examine why the number of tornadoes has been so low this year, it is important to look at the necessary ingredients of an outbreak.

"Thunderstorms that produce large hail, damaging winds and tornadoes feed on contrasts. Contrasts between warm and cold air or between dry and moist air," Smith said. The collision of the different air masses helps to produce instability in the atmosphere that leads to storm development.

Wind shear, or changing wind speed or direction with altitude, is also crucial for tornado development, because it helps create a twisting motion in the atmosphere.

Harold Brooks, research meteorologist at NOAA's National Severe Storms Laboratory in Norman, Okla., said that the lack of wind shear is responsible for the lower number of tornadoes in 2012.

"That's associated, in some ways, with the drought that was over the central part of the U.S. during the summertime," Brooks said. "The jet stream went far to the north, and when we have that kind of a pattern over the central U.S., you have very hot weather at the surface. When it is that hot and dry, you don't get very many storms. And the storms that do form, there is not enough wind shear to get them organized into the kind of storms that make significant tornadoes."

With very quiet and dry weather patterns, the winds do not vary much in speed or direction with height. Thus, rotating thunderstorms capable of producing tornadoes are less likely.

Smith points out that drought has led to slow tornado years in other times of U.S. history.

"The late 1970s to 1980 were quite dry in the Great Plains and there was a tornado drought as well," Smith said. "We are seeing a somewhat similar situation right now."