An important election survey that reveals patterns in voting and registration is the Census Bureau's Current Population Survey November Voting and Registration Supplement, or CPS for short. The 2012 CPS reveals insights to major stories about the election divined from the exit polls: the changing face of the electorate and the role of young people in determining the outcome of the presidential election. As I suggested previously, the increasing diversity of the 2012 electorate was a partially a turnout story, with non-Hispanic Whites modestly withdrawing from the electorate. The CPS further documents how it is also a story of the inevitable trend of increasing diversity of the country. Perhaps the most revealing new finding is a dramatic decrease in the youth vote, which has important ramifications for future elections.

The Changing Face of the Electorate

Among the major stories that emerged from the media's 2012 exit polls was how the non-White share of the electorate increased by two percentage points from 2008. The exit polls are, of course, only a survey of voters. The Census Bureau's CPS survey illuminates how turnout played a factor in the increasing non-White composition of the electorate, as suggestively evident in the aggregate election results.

Thus, part of the changing face of the American electorate is a turnout rate story, with a small decline in non-Hispanic White turnout rates compared to other races. Part of it is also a true change in the composition of the country's citizenry, as the country becomes more diverse.

The Youth Drop Out

Republicans may feel encouraged for their future election prospects, in that fewer non-Hispanic Whites voted in 2012 than 2008, since Whites tend to vote Republican. However, in reality there is both good news and bad news for Democrats here, and an opportunity for Republicans.

Lower youth turnout in 2012 is good news for Democrats from one perspective because Obama won in 2012 despite the withdrawal of this important Democratic constituency. Part of Obama's lower vote margin in 2012 compared to 2008 is due to lower youth turnout. However, there is certainly much for Democrats to be concerned about. Academic studies find that voting is habit-forming. Once a person has voted they are more likely to vote again, perhaps because they have learned how to navigate the system. The Obama campaign failed to mobilize the youth cohort who first became eligible to vote in the 2012 election, and Democrats will thus need to work harder in future elections to activate these people by registering them and helping them vote. These young people also present an opportunity for Republicans because they are the most persuadable potential voters, in that they have not yet become as fixed in their partisanship as people tend to do as they age. If Republicans can contact these young people first, they may be able to sway them to vote Republican.

The Census Bureau took a welcome step towards greater transparency in the 2012 Voting and Registration report regarding potential non-response bias -- or those who fail to participate in a poll or answer questions. Past Census Bureau practice has been to count persons who were not administered the voting and registration supplement, refused to answer a question, or did not know an answer as being a "no" response to questions such as if a person was registered or voted. While this practice continues in the 2012 report, for the first time the Census Bureau reports non-response in the detailed tables accompanying the report. While it has been possible to identify and remove non-responders using the raw individual-level data, the new practice enables more casual users of these data to make non-response adjustments.

Why does non-response matter? As I have discussed previously, non-response to the voting and registration supplement has been increasing over time and varies across important demographic groups -- such as race and ethnicity -- which can lead to erroneous conclusions when making temporal comparisons of registration and turnout rates. The good news is that the 2012 CPS non-response modestly declined from 2008 to 2012 -- from 13.8% in 2008 to 12.8% in 2012 -- reversing the upward trend.

The non-response has an important implication for a major finding reported on p.3 of the Census Bureau report:

Blacks voted at a higher rate (66.2 percent) than non-Hispanic Whites (64.1 percent) for the first time since the Census Bureau started publishing voting rates by the eligible citizenship population in 1996.


Keep in mind, the Census Bureau counts persons who did not respond to the survey as not-voting. I provide corrections to the tables presented above by removing those who did not provide a response t the voting question from the turnout rate calculations. 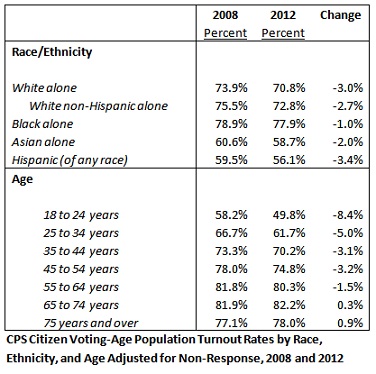 The big news from the CPS will be that African-American turnout exceeded non-Hispanic White turnout. But I contend that really that happened first in 2008. The more important political story may be the dramatic decline in youth turnout, as it poses a challenge to Democrats and an opportunity for Republicans. There is much more that will follow in the coming days -- from voter registration to early voting -- so stay tuned!