The severe drought across much of the U.S. proved stubborn once again during the past week as nearly four-fifths of the country was in some form of drought. And the area of the lower 48 states affected by moderate to exceptional drought expanded slightly, hitting a high for the year, according to data released Thursday morning.

The new U.S. Drought Monitor map shows that drought conditions have stayed the same or intensified in much of the southern Plains, with extreme to exceptional drought conditions (the two worst categories) expanding in northern and central Oklahoma and southeastern Texas. Conditions also worsened in the Dakotas, Minnesota, and Wisconsin. 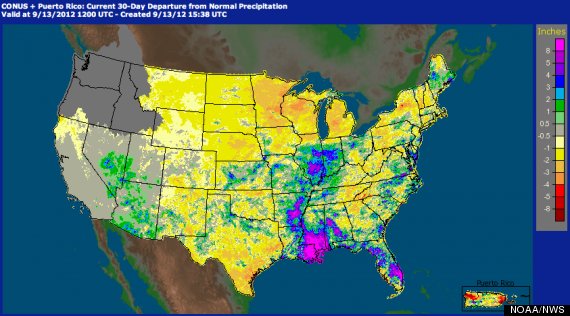 Precipitation departures from average during the last 30 days. Click on image for a larger version. (Data was missing for the Pacific Northwest.) Credit: NOAA/NWS.

There have been improvements in the Mid-Atlantic, Midwest, Northeast and Southwest, where recent rains helped to ease conditions. In the Southwest, in fact, there was too much rain, with flash flooding affecting Las Vegas, Nev., and other areas.

Some form of drought was affecting 53.7 percent of the entire country as of Sept. 11, which is also a new high. Drought conditions have been worsening in Hawaii, and drought forecasts show this trend is likely to continue through the fall.

The drought is the worst to strike the U.S. since the Dust Bowl era of the 1930s and lengthy droughts of the 1950s. It came on suddenly and largely without warning, and although the main trigger was most likely a La Niña event in the tropical Pacific Ocean, the drought was exacerbated by extremely hot temperatures during the spring and summer. July, for example, was the hottest month on record in the U.S., and the summer was the third-hottest on record, narrowly losing out to 2011 and 1936. Climate studies have shown that the odds of severe heat waves are increasing due to manmade climate change.

The drought has already cost the U.S. economy billions in damage, although new data shows that the U.S. corn crop was not as severely affected by the drought as initially feared. 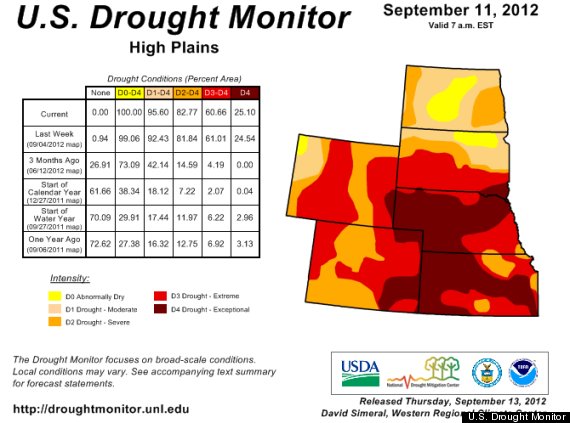 Closeup of drought conditions in the Plains states. Click on the image for a larger version. Credit: U.S. Drought Monitor.

According to an announcement from the Agriculture Department, the corn harvest is expected to be the smallest in six years, which would be down 13 percent compared to the 12.4 billion bushels harvested in 2011. Reductions in the corn, soybean and wheat harvests in the U.S. and other countries are already raising food prices around the world, causing fears of political instability, particularly in developing countries.

The most recent drought outlook shows that the drought is likely to continue throughout the fall in most of the High Plains and West, while improving conditions are more likely in the Midwest and Northeast.

1 / 44
In this Dec. 28, 2012 photo, corn stalks stand in a snowy field near La Vista, Neb. Despite getting some big storms in December, much of the U.S. is still desperate for relief from the nations longest dry spell in decades. And experts say it will take an absurd amount of snow to ease the woes of farmers and ranchers. (AP Photo/Nati Harnik)
AP