Nearly one year after Hurricane Sandy ravaged the East Coast, the 2013 Atlantic Hurricane Season has not produced a single land-falling hurricane in the U.S. Instead of having above-average storm activity, as the seasonal hurricane outlooks unanimously called for, the season has been quiet — notable for its inactivity.

The tropical season doesn’t officially end until November 30, but it would take a barrage of late-season storms to bring the season up to average levels, let alone above average, something that forecasters say is unlikely.

“It’s not only quiet, but it’s got the potential to be near record quiet for the Atlantic Basin,” Chris Landsea, a meteorologist at the National Hurricane Center in Miami, said.

So far, there have been just 11 named storms, two of which have been hurricanes, and none that have been major hurricanes.

While pre-season outlooks rarely, if ever, have pinpoint accuracy, they don’t usually miss by such a large margin. In May, the National Oceanic and Atmospheric Administration (NOAA) projected that there would likely be between 13 and 20 named storms (with sustained winds of at least 39 mph). Of those storms, NOAA projected that between seven and 11 would achieve hurricane status (winds of at least 74 mph); and that three or four would become major hurricanes of category 3, 4 or 5 (winds of at least 111 mph).

By one measure, 2013 so far ranks as the 7th quietest season in the past 70 years. That measure uses an index known as Accumulated Cyclone Energy, which incorporates how many storms formed, how long they lasted, and how strong they became. If no additional storms were to form before the end of the season, 2013 would be the 4th quietest.

There has not been a major hurricane in either the North Atlantic Basin or the eastern Pacific this year, something that hasn’t happened since 1968, according to Philip Klotzbach, a hurricane researcher and seasonal forecaster at Colorado State University.

Subsidence and the Sahara

The scant number of storms is surprising given some of the favorable conditions that exist that would normally fuel tropical cyclones. The ocean waters throughout the North Atlantic are warmer than average, the trade winds are lighter, and there is no El Niño event in the Pacific to ramp up high altitude winds that can tear nascent storms apart.

Forecasters say that three main features loom large for the inactivity: large areas of sinking air, frequent plumes of dry, dusty air coming off the Sahara Desert, and above-average wind shear. None of those features were part of their initial calculations in making seasonal projections. Researchers are now looking into whether they can be predicted in advance like other variables, such as El Niño and La Niña events. 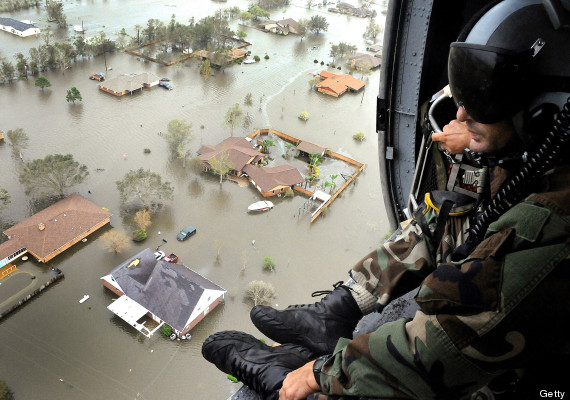 In this handout provided by the U.S. Air Force, an Air Force Reserve pararescueman from the 920th Rescue Wing scans the landscape of Nederland, Texas in the aftermath of Hurricane Ike, 13 September 2008. (Photo by Paul Flipse/US Air Force via Getty Images)

Brian McNoldy, a senior research associate at the University of Miami, said that across the Atlantic this season “you had air sinking through a pretty large depth of the atmosphere.” Sinking air inhibits storm formation by causing air to become drier and more stable, thereby stunting the growth of thunderstorms that require moist, unstable air in order to thrive.

Tropical weather systems depend on a plentiful supply of warm, moist air to form and intensify, and when these storms ingest exceptionally dry air, as many of the storms have this year, they can choke to death in a matter of hours or days. For example, Tropical Storm Karen formed in the Gulf of Mexico, where landfall in the U.S. or Mexico is virtually assured, but died before reaching land because of the presence of dry air and strong wind shear.

Some of the dry air across the Atlantic Basin came from large areas of dusty air that originated in the scorching Sahara Desert. However, such outbreaks of dusty air are fairly typical during hurricane season. What has been unusual has been the broad expanse of sinking and drying air throughout the North Atlantic basin, McNoldy said.

This season, the dry air “made a huge difference” and “squashed all the other factors that looked good,” he said.

Klotzbach said the area where most tropical storms and hurricanes form had the driest mid-to-lower atmospheric conditions during the Aug. 1 to Sept. 25 period since reliable records began in 1970.

In addition to the dry air, Landsea and Klotzbach pointed to above-average wind shear as another key reason. Wind shear is the difference in wind speed and direction between the ocean surface and the mid-to-upper atmosphere. Strong shear can knock storms off balance, essentially tearing them apart and allowing dry air to enter their circulation.

Landsea said that NOAA’s seasonal outlooks focused on the other pieces of the puzzle that argued in favor of an above average to average season, namely the absence of El Nino and the presence of warm sea surface temperatures. The seasonal outlook won’t be correct every time, Landsea said.

Klotzbach, who along with William Gray pioneered the art of forecasting the severity of hurricane seasons, said future outlooks will need to incorporate more variables.

“We will be looking at ways to be able to incorporate more moisture data into our models, in hopes to not make a similar mistake in future years,” he said in an email interview.

The absence of a major hurricane in the U.S. this season means the continuation of a record-long streak. On Oct. 24, it will be exactly 8 years since the last major hurricane of Category 3 strength or greater made landfall. Scientists fear this streak of good luck is leading to more severe cases of “hurricane amnesia,” which can complicate emergency preparation efforts the next time a monster storm threatens.

“When it doesn’t happen often you certainly become a little more lax,” McNoldy said, noting that in the 8 years since Hurricane Wilma struck Florida, tens of thousands of people have moved to the Sunshine State, many of whom have never before experienced a major hurricane. These residents, McNoldy said, may be less willing to evacuate their homes before the next major storm strikes.

“People who have never experienced it . . . don’t really know what they’re in for,” McNoldy said. 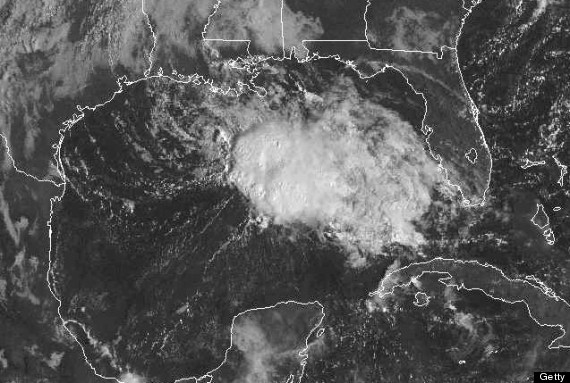 In this GOES satellite handout photo provided by National Oceanic and Atmospheric Administration (NOAA), Tropical Storm Karen churns in the Gulf of Mexico on October 05, 2013. (Photo by NOAA via Getty Images)

Even without a major hurricane reaching land, the U.S. has seen its fair share of damaging storms in recent years. Hurricane Ike devastated the Galveston, Texas area in 2008 as a strong Category 2 storm, and Sandy was one of the strongest and most destructive storms to ever strike the Jersey Shore.

“I think anybody living along the Jersey coast or Long Island or in New York City would attest that they had a major event even though it wasn’t a major hurricane,” Landsea said.

The 2013 Atlantic Hurricane Season Has Been Eerily Quiet; But Why?
Top 10 Costliest U.S. Hurricanes