The 2013 NFL Draft may not have the next Andrew Luck or Robert Griffin III, but it does have some terrific depth, particularly at cornerback and linebacker positions. Teams start filling roster holes on Thursday night, so take a look at three of the deepest positions heading into the weekend.

CORNERBACK
The cover corner has become a premium position in the NFL, as the Jets' recent trade of Darrelle Revis to Tampa Bay clearly demonstrates. Teams have to be able to cover four- and five-wide receiver sets, and they need corners to do it.

Dee Milliner, Alabama -- Not quite Patrick Peterson physically, but Milliner is another SEC monster with elite speed who can press cover and support the run (54 tackles last season).

Johnathan Banks, Mississippi State -- Maybe the best corner, value-wise, Banks had 11.5 tackles for a loss, three sacks and three forced fumbles last season in the rugged SEC. He may even shift to safety at some point down the line, as he has awesome ball skills and can really make a play.

Tyrann Mathieu, LSU -- Don't forget about Mathieu. The marijuana and alcohol use has to be a concern, but in terms of sheer talent, particularly his potential to make a big play in the return game, he's worth a shot on Day Two.

OUTSIDE LINEBACKER
Defensive tackle is another position that offers great depth, but this draft's stock of outside linebackers is full of future Pro-Bowl talents. Because of the modern NFL offense's tendency to use an aerial attack from spread formations, having a premier outside linebacker has become almost a necessity. 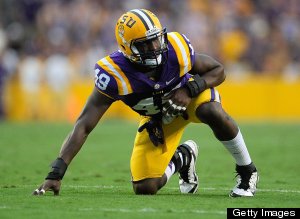 LSU's Barkevious Mingo is an explosive athlete who might just be the best pure talent in the draft. (Getty Images)

Dion Jordan, Oregon -- With unbelievable speed and athletic ability, Jordan is a great all-around talent who can also drop back and cover.

Jarvis Jones, Georgia -- Exceptional tackler with quickness and a propensity to cause fumbles.

Barkevious Mingo, LSU -- This sensational, pure athlete could be the next DeMarcus Ware. He can really rush the passer and, as he increases his strength, he should also be a matchup nightmare on the edge.

Arthur Brown, Kansas State -- Would be surefire first rounder in most drafts because he's durable and such a sure-handed tackler.

INSIDE LINEBACKER
Like the running back, inside linebacker has lost some luster in the NFL as the league shifts increasingly to a spread attack. But he is still the quarterback of your defense, and San Francisco's Patrick Willis, for example, demonstrates precisely why the position still has tangible value.

Alec Ogletree, Georgia -- A converted safety whose 4.55 speed allows him to track down just about everybody on a football field. Ogletree's two drawbacks are that his instincts as a linebacker are not the sharpest, and that he comes with baggage: He drew a four-game suspension for a failed drug test before the 2012 season, followed by a DUI arrest in February.

Kevin Minter, LSU -- He's been overshadowed a bit by Mingo but he's a great football player in his own right. Minter, just a junior, can really run and may have the best instincts of any linebacker in the draft.