2013 was one big, downward trend for most of Washington.

A glance at this year's polling shows Americans' disaffection toward nearly everything it's possible to poll on: both major parties, all three branches of government, and even ourselves. Here's a summary of some of the people and institutions we've grown to hate even more this year. Charts and averages are according to HuffPost Pollster, which compiles all publicly available polling. 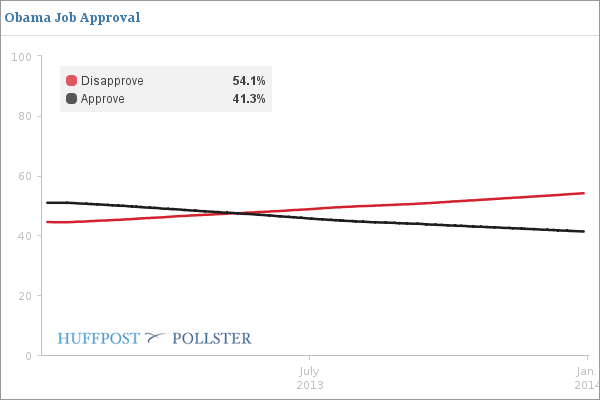 President Obama, who began the year with a slight majority of the American public approving of his job performance, ends it with a rating hovering just over 41 percent. 2013 was marked by the problem-plagued Obamacare rollout, controversial revelations of NSA surveillance and stalled efforts on gun control and immigration, among a host of issues. Obama's approval rating declined by about 10 points among independents and 9 points among Democrats. (It stayed relatively steady among Republicans, mainly because there wasn't much room for it to fall further.) His approval ratings on various issues also declined: on the economy and health care by about 6 points, and on foreign policy by about 8 points. Many Americans are souring on the president personally, as well -- his favorability rating is down to about 44 percent. 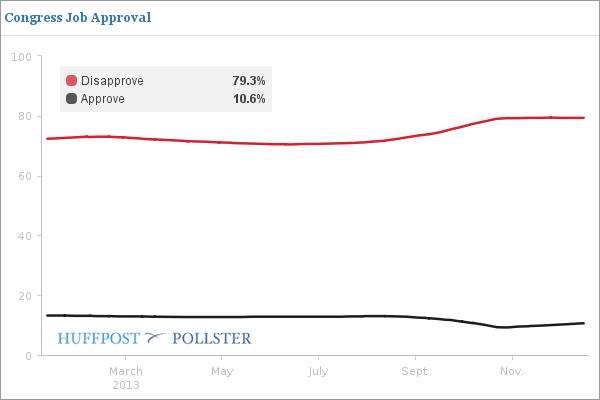 Not content to be merely historically unproductive, Congress also hit record low approval ratings this year -- repeatedly. After starting the year with a dismal 13 percent approval rating, Congress briefly plunged into the single digits during the government shutdown, before recovering to 11 percent. (The executive and legislative branches aren't the only ones in trouble. Approval of the Supreme Court is also polling at a near-record low.) 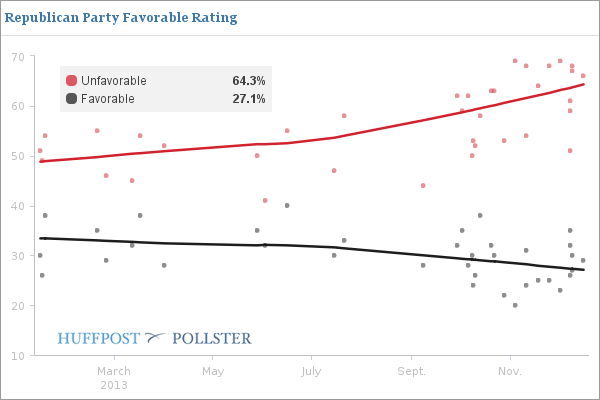 The GOP began 2013 with a reputation as "out of touch" and "extreme," and things only went downhill from there, with the government shutdown doing little to change the public's views. More than a quarter of Republicans rate their own party unfavorably, and although they largely agree on a need to change, they are divided sharply on whether the party should modify its stances or just its messaging. While the GOP has recovered a slight advantage in polls on the 2014 congressional race, the party's image remains shaky. At the end of the year, just 27 percent of Americans view the Republican Party favorably, while 64 percent hold negative views. 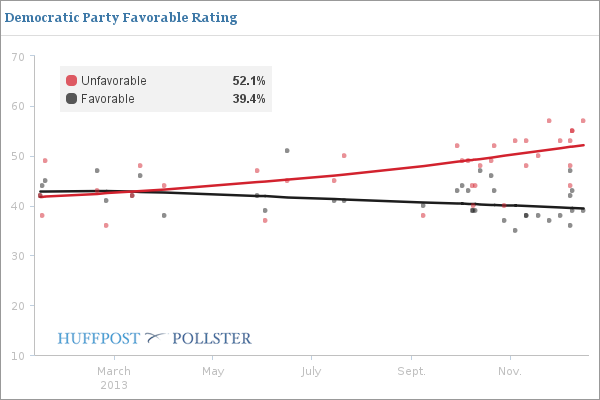 Republicans' losses, however, haven't translated into gains for their rivals. The Democrats began the year on a barely positive note, but end it significantly underwater. Fewer than 40 percent now view the party favorably, while 52 percent view it unfavorably. According to a December NBC/Wall Street Journal poll, the party's traditional edge over the GOP on being trusted to handle health care is at a low of 6 points, while the GOP's advantage on the economy is the highest it's been since 1995. 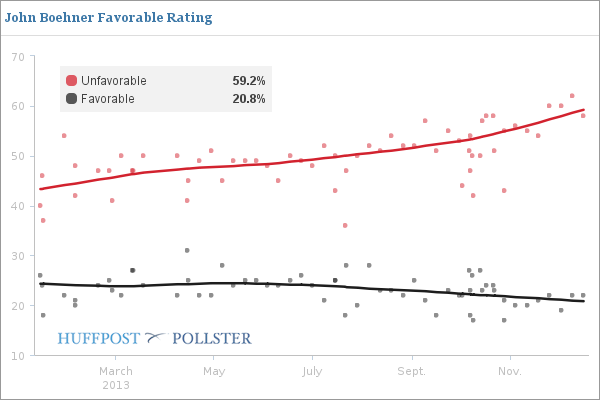 More Americans got to know John Boehner this year, and most weren't too enthusiastic. His unfavorable rating rose nearly 16 points this year, while his favorability remained largely flat. A CNN poll taken after the government shutdown found that most Americans thought he should be ousted from his leadership role. 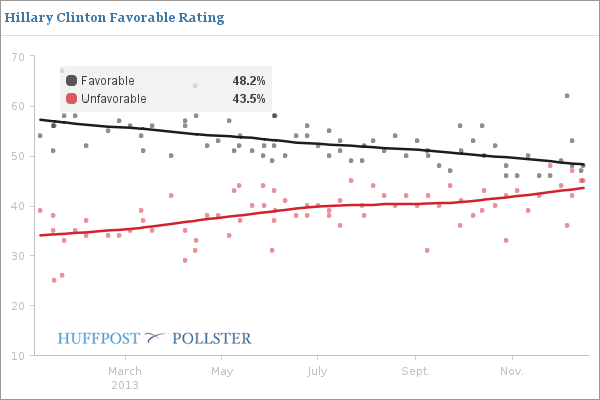 Hillary Clinton remains by far the most popular Democratic contender for president in 2016. She's still viewed positively, but her numbers are no longer anywhere near the support she received during her tenure as Secretary of State. About 48 percent of Americans now view her favorably, down from more than 57 percent in January. 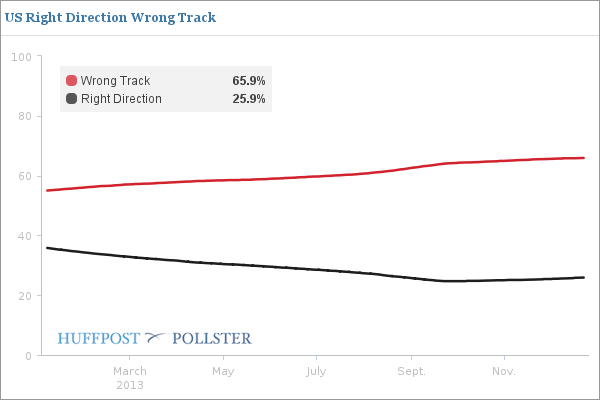 Unhappiness isn't limited to Washington. Fewer than 26 percent of Americans now think the country is on the right track, down nearly 10 points from the beginning of the year. Dissatisfaction in the state of the nation rose by nearly 9 points. Worse, just a third now say that most people can be trusted, down from half in the 1970s.

But for all that, Americans remain personally optimistic. A Fox news poll finds that 51 percent say they and their family had a good year, and 54 percent think the economy will be better next year.

PHOTO GALLERY
SAY WHAT?! The Strangest Bills Of 2013

2013 Was A Bad Year For Everyone In Washington, Polls Show
SAY WHAT?! The Strangest Bills Of 2013

1 / 11
Fed Up
<strong>January 2013:</strong> Mississippi state Reps. Jeff Smith (R), pictured, and Gary Chism (R) <a href="https://www.huffpost.com/entry/mississippi-nulification_n_2569486" target="_blank">proposed legislation</a> that would create a committee whose sole purpose is to nullify federal laws the state does not want to follow. The bill fell in committee in <a href="http://openstates.org/ms/bills/2013/HB490/" target="_blank">early February</a>.
Mississippi House of Representatives