Many in India worship Sherawali Mata or Durga, the divine "Mother Goddess" who comes mounted on a tiger, making the king of the jungle the chosen vehicle of one of India's most powerful and revered religious deities. An equal number, also worship her husband, Shiva, one of the three commanding gods of the Hindu trinity, and one who meditates sitting on a tiger skin.

Clearly, between the husband-wife divine duo, the tiger is the common connotation of power. While one rides it into the battlefields, symbolizing her vanquishing power and infallibility, the other either sits on its skin or wears it, denoting his control over all worldly affairs. 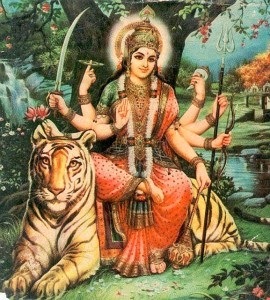 It would then be obvious to assume that the eminence of tiger in India would be of epic proportions and the majestic cat would be revered within the country as much as its countless temples.

But alas, the tiger in India is only safe as long as its been ridden on by the goddess in fables and folklore. For in the wild, it runs the phenomenal risk of being poached and mutilated for the trade of its skin and body parts. Ironically, the iconic representation of immortal power and might is itself begging for some divine intervention now.

According to the Wildlife Protection Society of India, 2013 saw 39 tigers poached in India, the highest ever in seven years. The Times of India, reported that poachers in India killed 101 tigers across 17 states since 2008, citing proximity of human settlements to tiger habitats as the main reason for the rapid increase in poaching.

The southern-Indian state of Karnataka lost more tigers to poachers than anywhere else in the country. The Ministry of Environment and Forests of the state of Karnataka stated that there were about 762 villages with 48,549 families in the core/critical tiger habitats across India of which 101 such villages were in Karnataka.

However, even the numbers quoted above are disputed by conservation activists as many claim that a good number of poaching cases go unreported or are hushed up due to complicity of conniving officials.

"Our law enforcement is a joke and we all know that even the pettiest of the crimes in India are committed with the consent of colluding officers. What do you think, they'll let go off the lucrative tiger trade so easily?," questions tiger activist Ramesh (name changed due to safety reasons) who works for a wildlife watchdog.

"Just look at these rangers protecting the tigers. They are ill-equipped, under-paid, have no life or health insurance, handicapped in the absence of a strong intelligence gathering network and are often armed with obsolete weapons that are no match for the automatic weapons that poachers use. To make matters worse, some of them are involved in the trade and the laws around tiger poaching and the trade of tiger parts is absurdly weak and full of loopholes. How do you expect the situation to come under control, then?," adds Ramesh.

Ramesh's colleague Mohan (name changed) who works for the same watchdog, thinks the solution could lie in the intelligent usage of future-smart technology.

"We claim to be the IT gurus of the world and waste no chance in announcing our global supremacy in cutting edge science and technology but can we not innovate enough to monitor our existing tiger population and win the war over poachers? I mean, India is sending lunar and Martian space missions but can it not use satellite imaging and drones to keep its tiger reserves and forests safe? Can it not equip its rangers better? " asks a frustrated Mohan.

"Where's the political will to save the so-called national animal of the world's largest democracy? Just because the initiative is not sexy enough to drive media coverage or because tigers don't vote, or because some henchman is making money somewhere, the politicians won't care two hoots about it? That's so wrong and annoying, "adds Mohan.

Both, Ramesh and Mohan's frustration is disconcerting. Earlier in December, right on the outskirts of one of India's most celebrated tiger sanctuaries, the Jim Corbett National Park, two tigers were trapped, killed and skinned by 11 poachers. The gang had plans to kill many more but was timely intercepted.

It is learnt that the gang sold each tiger skin for about USD 9000. In 2013, Corbett National Park lost eight big cats to similar poaching gangs.

Tiger skins and parts such as nails and tooth are believed by some Indians to be possessing mystic and esoteric powers and undoubtedly superstition fuels their demand, while often tiger bones, eyes, whiskers, fat, bile, brain, penis, teeth and faeces find their way into China for use in Traditional Chinese Medicine.

As India embarks on the world's biggest exercise to count the number of tigers in the wild, the hope is the exercise would be genuine and not a mere eyewash. Beginning from TV and print commercials to currency coins, Indians see the image of the tiger everywhere, never mind the fact that the tiger is running for cover in real life.

Hindu mythology has it that Goddess Durga (remember, the one on a tiger) represents the victory of good over evil. There's one battle left for Durga to inspire her men and women in India; that of saving her own majestic vehicle, the king of the jungle, the magnificent Indian Tiger.