The only good news in the just-released 2013 U.S. trade data is that it can only reinforce growing congressional and public opposition to more-of-the-same trade agreements.

The White House is promising a major push to obtain Fast Track trade authority to railroad the massive Trans-Pacific Partnership (TPP) through Congress. Next week, 10 days of TPP negotiations will start in Singapore. On February 22, U.S. Trade Representative Mike Froman and other TPP-nation trade ministers will meet to try again to hash out a final deal.

Meanwhile, in the category of doing the same thing over and over and expecting a different result, the latest data show why TPP is a lunatic idea. TPP is premised on expanding the old North American Free Trade Agreement (NAFTA) model to additional nations. The U.S. opening proposals for TPP were based on the text of the 2011 U.S.-Korea Free Trade Agreement (FTA).

The year-end 2013 data released by the U.S. International Trade Commission (USITC) show just how NAFTA and the Korea FTA are working out.

There has been a stunning decline in U.S. exports to Korea, a rise in imports from Korea, and a widening of the U.S. trade deficit since the Korea FTA. 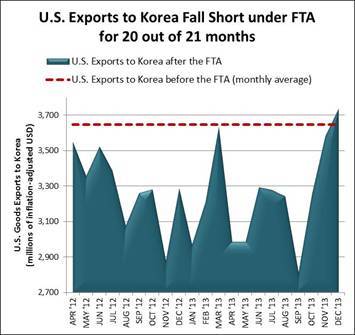 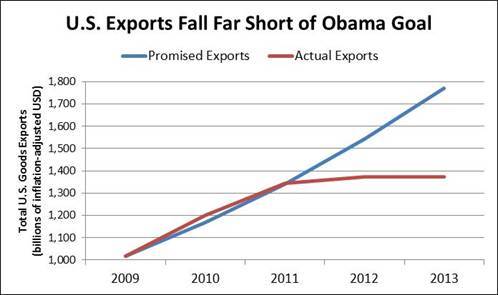 There is a staggering U.S. trade deficit with Canada and Mexico after 20 years of NAFTA. 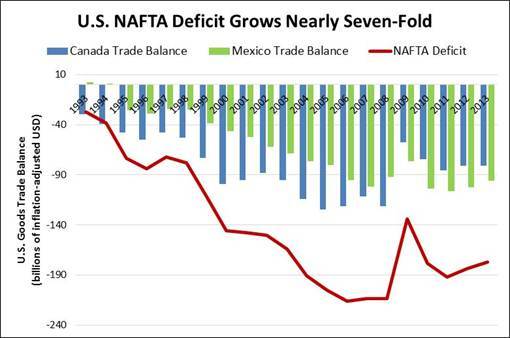 The USITC data correct last week's Census Bureau trade data to remove re-exports - goods made elsewhere that pass through U.S. ports en route to final destinations. (NAFTA defenders love to count those goods from say China that pass through the U.S. en route to Canada or Mexico because it makes the NAFTA deficit look half as large.)

The corrected data only adds fuel to the fire building against Obama's request for getting Fast Track trade authority. While the GOP House leadership is perversely keen to deliver this vast new power to the Democratic president they attack for announcing he will use the executive power he has, most House Democrats oppose Fast Track as does a bloc of House Republicans.

The battle over Fast Track will be waged in the House. In 1998, 171 Democrats and 71 Republicans voted no and ended then-President Bill Clinton's quest for Fast Track powers. Now President Obama is calling House Democrats to ask for their support. Senate Majority Leader Harry Reid's recent announcement that he opposes Fast Track sent a powerful signal to congressional Democrats that they can say no.

Just like today for TPP, in the past Congress and the public were sold on glorious projections of trade agreements' benefits. But the actual data show the projections were at best wrong and perhaps simply cooked. The White House and the corporate lobby are trying to sell Congress the TPP and Fast Track with the same old promises about export growth and job creation, but the 2013 data show empirically that expanding the old trade model will only result in larger trade deficits, more job loss and downward pressure on U.S. wages.