For the first time ever, Algeria presented its business and investment opportunities to the business community in the United States with two roadshow conferences held in Chicago and Washington D.C. Led by Abdeslam Bouchouareb, Minister of Industry and Mines of Algeria, a delegation of top CEOs from the largest country in Africa participated. The 2014 Doing Business in Algeria Roadshow was organized by the U.S. - Algeria Business Council and the Embassy of Algeria in Washington D.C., in partnership with the National U.S. - Arab Chamber of Commerce.

Government officials from Algeria made extra effort to present the positive steps they have undertaken to boost business and economic cooperation. As an example, Minister Bouchouareb noted, it once took four months for a company to receive a construction permit in Algeria; now that process takes just 20 days. The Algerian government introduced various financial incentives to attract foreign companies to work in Algeria: non-retroactivity of laws, zero percent custom duties, value-added taxes, corporate tax and sales taxes, to name a few. Reform of the Investment Law is also underway to enable foreign investors to obtain 51 percent of company ownership. (Currently, foreign investors can own a maximum of 49 percent of a company's shares.) In 2010, the government also initiated a recovery and modernization plan for state-owned enterprises.

Accession to WTO the Major Strategic Goal for Algeria

Algerian currency reserves recently reached 200 billion USD, and the country is debt-free. GDP growth is 6 percent with efforts underway to reach 7 percent. Unemployment dropped to just above 9 percent. The government has initiated a new investment plan of 262 billion USD to diversify its economy away from heavy dependence on oil and gas. Agriculture, construction, and healthcare are but a few sectors to see this aggressive boost. Algeria is also rich in base metals, precious metals, gemstones, industrial metals, rare metals, and rare earth minerals. Business plans and feasibility studies are in progress to enhance the mining industry.

For all of these projects, loans are already allocated and locations already reserved.

The ETRHB HADDAD Group recently launched construction projects valued at 10 billion USD, on top of the more than 10 billion USD in existing projects, from highways, tunnels, bridges, and buildings to dams and hydraulics in general. Ali Haddad, the group's CEO, at age 49 represents a new generation of top entrepreneurs in Algeria, committed to building super-modern infrastructure for Africa's largest country. 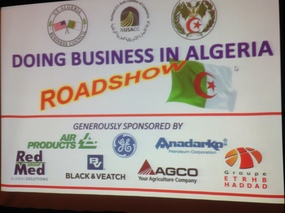 Algeria is now a creditor to the international financial institutions and has a strong macroeconomic environment to address socio-economic issues. By 2020, U.S. export of goods and services to Algeria will reach 7.63 billion USD. To further develop its institutions and economy, the U.S. urges Algeria to embark on needed reforms to join the WTO, as a rule-based trading system that would help expand commerce.

U.S. companies have significant presence in Algeria's oil and gas industry but they are gearing to expand their footprint in Algeria in other sectors, and this superbly organized road show greatly assisted the effort.

General Electric, which has been present in Algeria for a long time, recently received a 3 billion USD contract to build nine power plants. Boeing won a contract to deliver eight new 787 Dreamliners to Algeria. American companies are also present in the healthcare industry.

When discussing investment, it is "equally important to measure value in the difference [companies] could make in people's lives - or the changes in someone's understanding about the world," concluded Charles H. Rivkin, U.S. Assistant Secretary of State for Economic and Business Affairs, expressing in his remarks U.S. support for Algeria to accede to WTO membership.

"Building a win - win partnership between the U.S. and Algeria's business groups is what we are looking for," said Dr. Ismael Chikhoune, President & CEO of the U.S. - Algeria Business Council based in Virginia.

Based on this road show, they are on the right track.