Fall has just begun and voters are already casting ballots in key states holding U.S. Senate races that will likely determine which party will be the Senate majority. So far, at least 18,000 people have already cast mail ballots as of Friday, September 26, 38 days out from Election Day on November 4.

Election officials in these states release early voting data that provide clues as to which party currently has an edge. (I track these statistics here.) The $60 million voter mobilization "Bannock Street project" is a key component of the DSCC's strategy to expand the electorate just enough in the most closely contested states to lift the Democrats' candidates over the top. The fingerprints of these efforts can be seen in these data, as well.

The DSCC's investment appears to be paying off. There are signs Republicans are not going to cede early voting, but their efforts are being swamped by the Democrats' mobilization drives.

In all of 2010 in Iowa, 349,219 mail ballots were counted. More than a month from the election, already 145,890 voters have requested ballots. An average of more than 8,000 new mail ballot requests were made each day this week (of the four days of new reports). At this pace -- which typically only increases as November nears -- either Iowa will set a record for the share of early voting in a midterm election or Election Day turnout will very high. I would not be surprised if both come to pass given the intense interest in the Braley (D) - Ernst (R) Senate matchup.

Democrats have a commanding lead among Iowa's mail ballot requests. Registered Democrats comprise 52.6 percent of Iowans who have requested ballots so far, while Republicans compose only 26.7 percent. In 2010, Democrats were 43.7 percent compared to 38.0 percent for Republicans among all ballots cast. For Republicans to match their 2010 performance, moving forward they need to have 46 percent of all new ballot requests compared to 37 percent for the Democrats. This assumes the same absolute number of early voters as in 2010; if it's higher their challenge will be greater. Republicans need to kick it up into high gear. After a strong start out of the gate for Republicans compared to the start of 2010 -- perhaps driven by mobilization during the primary -- Democrats have dominated the 33,712 new ballot requests this week: 56.1 percent to 23.3 percent.

While this is good news for Braley, it is instructive to remember that even in 2004, Kerry won the early vote but lost the state. In 2010, incumbent Sen. Grassley cruised to victory despite the Democratic advantage in the early vote. Much is different about the candidates in 2014 compared to 2010, but if the past is a guide, Democrats are going to need all these early votes if they are to overcome the surge of Republicans who will vote on Election Day. 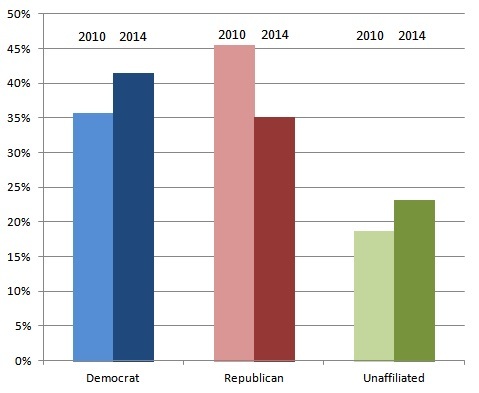 When Florida reduced early voting hours in 2012 (since restored), Democrats changed their behavior by casting mail ballots. Republicans had about a 14 point edge in Florida mail ballots in 2008, but had only a 4 point advantage in 2012. At least some of this change in behavior was due to the Obama campaign encouraging their supporters to cast a mail ballot.

It appears something similar to Florida is happening in North Carolina. Typically, registered Republicans lead the mail ballots; in 2010 they led ballot counted 45.4 percent to 35.7 percent. This year is topsy-turvy, with Democrats leading mail ballot requests 41.4 percent to 35.0 percent. Their lead is persisting in the daily ballot request updates. Once in-person early voting opens on October 23, we'll have a better sense how much Democrats are going to need these banked mail votes.

North Carolina's wealth of data provides an opportunity to peek under the hood of the DSCC's voter mobilization efforts. The key support target any campaign wishes to encourage to vote is not high propensity voters; they will take care of themselves. It's mobilizing moderate and low propensity voters that is a key to winning elections. The fruits of these efforts can be measured by examining those North Carolina voters with and without a record of voting in the 2010 general election. Those without are the gold campaigns are mining for.

Among the 9,981 who requested ballots and voted in the 2010 election, registered Democrats are 41.4 percent to Republicans 38.0 percent. Among the 5,558 without, Democrats are 41.6 percent to 29.7 percent. Logically, the difference among Republicans must be among those without a party, who were 20.5 percent of those who voted in 2010 and 28.0 percent of those who did not. Republicans are doing a bit worse among the persons who did not vote in 2010. So far it appears that Democrats have banked a good number of votes among people who would have voted anyway, and are seeing some modest success with mobilizing lower-propensity voters. We'll have to see if this will be enough for Hagan to prevail over Tillis.

The early voting period has just begun. In North Carolina, perhaps the early vote confirms that Hagan indeed has a narrow lead over Tillis in the polls; the signal is in the same direction. The intense voter mobilization underway in Iowa may mean high turnout. Pollsters don't typically report their expected turnout, but any number of polls are showing Democratic candidates doing better among registered voters than likely voters. The higher the turnout, the more the electorate will look like the profile of registered voters, which could be decisive for who wins Iowa and Senate control.