Ebola is now a dreaded household name. Everyone has heard of this virus, causing thousands of deaths in countries in Africa particularly in Guinea, Liberia and Sierra Leone. We followed the plight of health care workers who put their lives on the line to battle the viral disease, trying to prevent the virus from spreading to the next host. But what about the Enterovirus D68? And what about Chlorovirus, Densovirus, Porcine Epidemic Diarrhea Virus and Ranavirus? (See Bullets below).

Our understanding of the viral world is severely limited. Viruses are the most numerous and diverse entities on earth with estimates of 1.7 billion different viruses and levels as high as 1030 viruses in the ocean alone (This means 30 zeros after the 1! known as a nonillion, far beyond a quadrillion). Hundreds of known viruses infect humans, yet this is the tip of the ice berg. Using advanced next generation sequencing techniques we are gaining a glimpse into the viral world and are astonished by what we are finding.

In human sewage we have only been able to identify 11% of the genetic signatures (89% are unknown to us). We find human, animal, plant and bacterial viruses in sewage.1 This raises many questions: Are the bacterial viruses providing antibacterial resistance genes, are the animal viruses potentially infecting humans? Are the plant viruses coming from the water or from the food we eat or both? And we know that even the Ebola virus can end up in sewage (fecal wastes) due to the hemorrhaging of the intestinal track and diarrhea. How do we treat wastes and sewage to effectively remove these viruses?

Figure 1. Viruses identified in sewage (1a) and of those identified by specific host (1b) 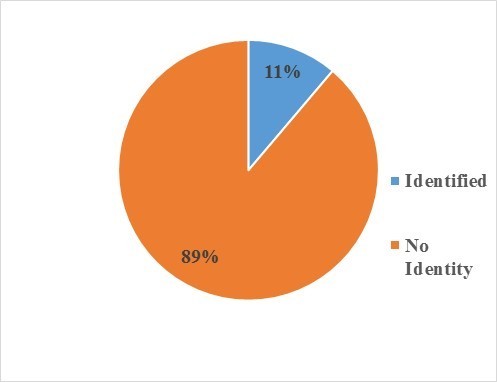 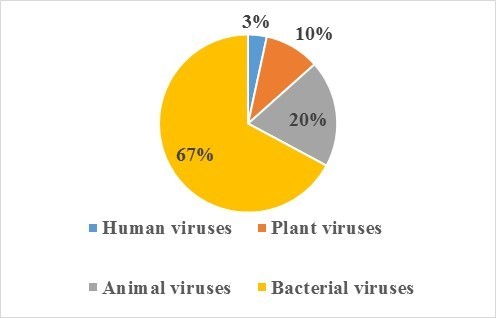 What are viruses? Viruses are bio-nano particles so small we can only see them under the electron microscope; they are 1000 to 10,000 times smaller than a human hair. They are compact structures with a protein coat, some with spikes, surrounding the nucleic acid (DNA or RNA, the building blocks of life).

Figure 2. A bacterial virus and rotavirus under the electron micrscope. Rotavirus is a small RNA virus that is a major cause of severe infant diarrhea world wide.2

They must enter a cell to reproduce, thus they are inert until within the "host" cell and that is when viruses can grow and cause disease. Millions of viruses are produced by a single infected host (individual). Viruses are very stable in the environment and very potent. Only a few viruses in water, in food, on surfaces and on our hands are required for transmission, possibly causing disease in the next host.

Viruses are not just causing severe illness and death in humans, but are affecting animals around the globe. Novel viruses are found ever year and are surprising us with the ability to jump hosts (such as an algal virus now found in humans) (See Bullets below).

Some Viruses of Concern

As we move from 2014 to 2015, we are already speaking about an influenza epidemic, and the norovirus outbreak at Chuck E. Cheese. The flu virus (influenza, an RNA virus) and stomach virus (norovirus, an RNA virus) pass through our communities frequently and with a less than effective vaccine this year for the flu and no vaccine for norovirus we still struggle to address disease transmission prevention. The year of the virus may just turn into the Decade of The Virus. A major effort is needed in the scientific community to educate a global cadre of the next generation of virologists, to explore and to illuminate the world of viruses as we learn about who they are, what they are doing and how we control them.