When looking back in fifty years, how will 2015 be remembered? Did the year help to progress mankind, or did it push us back even further? This is best answered by examining some of most the significant events of the year:

Charlie Hebdo offices attacked in Paris, fueling pressure on the French government to heighten security measures and strengthen the rhetoric against global terrorism. Saudi Arabia's King Abdullah dies, abdicating his throne over The Kingdom to his brother, Salman bin Abdulaziz. Abdullah was known for his efforts in improving women's rights, fighting global terrorism, and bolstering ties with the West.

Ukrainian and Russian relations are strained, as both countries finally agree to a ceasefire on frail terms, after months of militant warfare and regional tension. Israeli Prime Minister Benjamin Netanyahu addresses Congress, pleading to the audience to mitigate the Obama administration's efforts to reach a nuclear deal with Iran. Netanyahu's covert visit was controversial, as he circumvented the White House through a direct invitation from top Republican officials.

Greece misses a debt payment of more than €1 billion, causing the country to shut down its banking infrastructure. Later in August, the German government, alongside the rest of the European community, agrees to a bailout package for the struggling economy.

The American unemployment rate drops to 5.4%, showing strong signs of domestic and global economic recovery. This continued trend of stability eventually leads to the Federal Reserve's announcement in December that it will start increasing interest rates after almost a decade. Q3:

Iran agrees to a historic nuclear deal, limiting their nuclear program and allowing increased oversight by the IAEA (International Atomic Energy Agency). This would come in exchange for removal of sanctions and the opening of the country's economy to world markets.

The Syrian civil war escalates, triggering the exodus of millions of people, and sparking the global debate over countries opening their borders to asylum seeking refugees.

Prime Minister Narendra Modi of India announces the Make In India initiative. Since taking office, Modi has made several promises ranging from bettering women's rights to increased economic fortitude. Shortly after the launch of the initiative, the government boasted its recent promotion as the leading recipient of foreign investments.

China nixes its long-standing one-child policy, attempting to compensate for a quickly aging population. Critics are concerned with the availability of resources, as the exponentially growing Chinese population copes with the country's rash economic fluctuations. Attacks in Paris leave nearly 130 people dead, as the city faces its second large-scale terrorist attack within a year. The Islamic State (ISIS) claimed responsibility, triggering an aggressive bombing campaign by the French government. Nations gather for a monumental conference on climate change (COP21), seeking to reach an agreement to decrease carbon emissions across the global community, amidst the growing evidence supporting global warming and deteriorating ecological patterns. 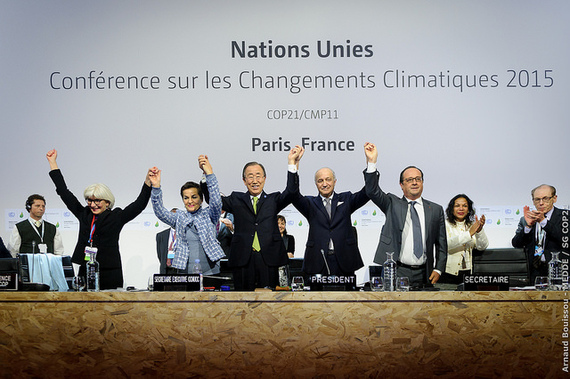 How did we do? While 2015 did entail significant positive progress on many fronts (see: heightened diplomatic efforts, reduced nuclear arsenals, strengthened economic ties), the sheer amount of destruction and human suffering promulgated by terrorist attacks, civil wars, and political unrest, resulted in an overall net-negative for the world. If measuring the maturity of human kind, this year could not have scored above a B+ on anyone's report card. What's next?

The year's events have left open a variety of action items. One of the most prevalent issues worth addressing will be the deteriorating stability of the Middle East. Amidst the Syrian crisis as well as the growing ideology posed by ISIS, increasing threats of violence and terrorism will continue to surface in the coming years. While initial instinct may beckon the global community to send ground forces or even counteract with increased militarism in order to quell short-term danger, this may not be the most viable long term solution. The conflict itself is riddled with a variety of different layers, dating back to issues with traditional Bedouin culture, to modern day Sunni- Shia conflicts. Therefore, any counter efforts must include deep and rigorous studies of the sectarian and faction based politics which are the true sources of the conflict. Only through such an in-depth approach, alongside economic restrictions barring products sourced from these groups, will a sustainable campaign be made to stabilize the region.

Another issue that must climb to the top of the global agenda in the years to come is climate change. With increasing evidence of changing meteorological patterns, and natural catastrophes accounting for a bulk of global disasters, climate change can no longer be just an elective issue for governments to ignore. Rather, it is a matter of national security, as countries will have to innovate ways to protect their citizens from natural phenomena. Governments will have to take more aggressive measures to curtail their carbon footprint. While sessions such as COP21 are important strides, there needs to be increased emphasis on alternative energy research and stringent demerit/ incentive policies for corporations.

While these two issues will likely be of extreme significance in the years to come, they are but two of the many. It will be interesting to see what the next few years entail, especially given that economies are growing, ideologies are evolving, and countries are reshaping their own footprints in the world. One can hope, that along with these changing shifts, global diplomacy remains a cornerstone of issues to arise, and will be the go-to solution for years to come. Indeed, perhaps there are better report cards to come.