Ben Zauzmer, an applied math major at Harvard, uses only data - no personal hunches or opinions - to predict the Oscars. He has served as a columnist for The Hollywood Reporter, and his work has been featured in The Wall Street Journal, The Economist, and publications across the globe. Follow him on Twitter: @BensOscarMath.

We've now had months of delightful Oscar speculation: Who's in? Who's out? Who will have the honor of walking the Red Carpet next month, and who will have to watch the Oscars from home?

Finally, all that will finally change on Thursday morning, when the Oscar nominations are announced.

But if you can't wait to find out who the nominees are, I'm here to help. I have analyzed thousands of data points from the past decade of the Oscars and other awards shows to determine which factors are the best predictors of an Oscar nomination. Math can't guarantee anything, but these charts do represent the mathematical probabilities that each of these films and actors will be nominated. Without further ado: 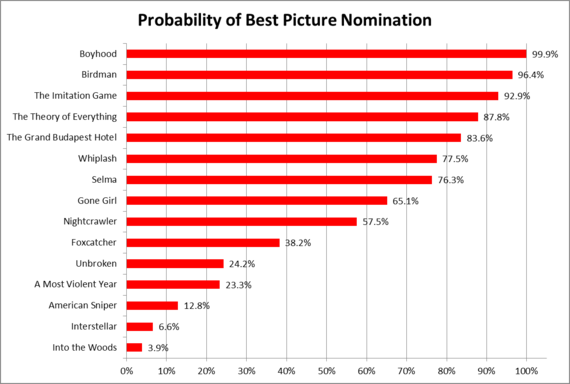 Consider those top three -- Boyhood, Birdman, and The Imitation Game -- to be near guarantees. The pair of films with percentages in the 80s -- The Theory of Everything and The Grand Budapest Hotel -- are not far behind. While the Academy rules introduced in 2009 allowed the number of Best Picture nominees to fluctuate between five and ten, each of the five years since the rule change have seen either nine or ten nominees.

After that, things get more interesting. Whiplash, Nightcrawler, Foxcatcher, and American Sniper all received both an AFI top films of the year honor and a Producers Guild Best Picture nomination. Movies with that combination yield an Oscar nod 87 percent of the time. But each has its problems, even beyond failing to get either a SAG or a BAFTA nomination. Whiplash, Nightcrawler, and American Sniper did not receive a Golden Globe Best Picture nomination, and remember - there are ten of those to go around since the Globes honor five dramas and five musicals/comedies. Foxcatcher received fewer critic circle nominations than any of the movies above it on this list.

Selma and Gone Girl, right there in the middle, are perhaps the most intriguing. Both earned many early accolades, but relatively few honors in the more recent announcements. And both will seriously be at the mercy of how many nominees the Academy ends up honoring this year. If there are ten on the final list, expect both to have a decent chance, higher than the 76 percent and 65 percent chance listed above. If there are fewer than ten, both of the percentages should instead be lower. 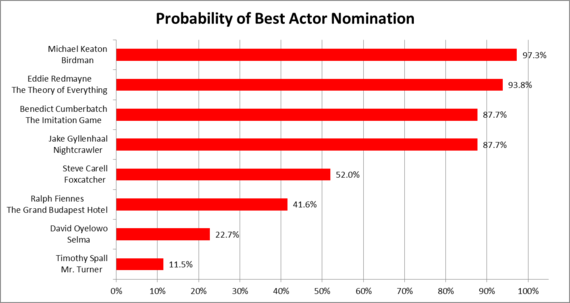 When predicting acting nominations, look to the SAG nominations first. At least, that's what the math says. That's why Steve Carell cracked the top five. However, Ralph Fiennes and David Oyelowo both earned Critics Choice nominations; while that's not as great a predictor, it's good enough that we shouldn't discount either of those two actors.

This is a good time to mention that these standings represent likelihood of a nomination, not likelihood of winning. So while the Golden Globes clearly established Michael Keaton and Eddie Redmayne as the top two, the above order does not necessarily represent the current standings for who will win. I'll be releasing the mathematical odds of winning Oscars in each category closer to the date of the Academy Awards ceremony. 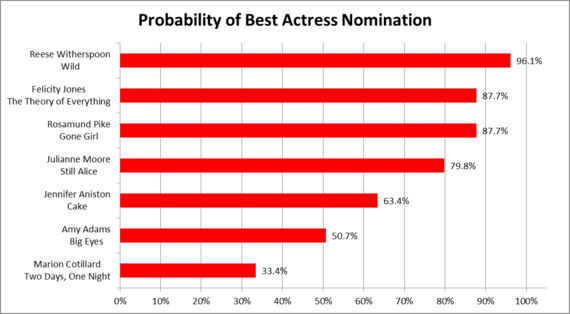 What is this? Golden Globe victors Julianne Moore and Amy Adams in fourth and sixth? The fact of the matter is, winning Golden Globes is no guarantee for certain categories. For Best Actress in a drama, it's a great predictor, with 97 percent of those who win the category earning Oscar nominations. That helps put Moore (who didn't earn a Critics Choice nomination) in the top five. But for Best Actress in a comedy or musical, only 69 percent of winners get Oscar nominations. That definitely helps Adams, but it might not be enough to make up for her lack of a SAG nomination. 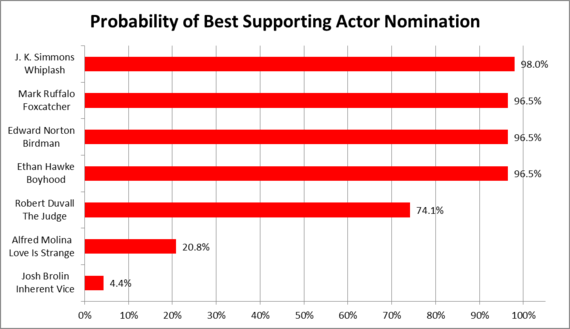 The last time the Golden Globes and the SAGs nominated the same five supporting actors was 2009. And guess what happened: all five of those actors went on to earn Oscar nominations (Christoph Waltz eventually won for Inglorious Basterds). The first five actors listed above are hoping that piece of history repeats itself.

Simmons gets the slight advantage due to the Golden Globe victory on Sunday. Duvall is at a disadvantage since he is the only one of those five not to earn a BAFTA nomination. The BAFTAs did not honor any of these other actors; rather, they added Steve Carell in Foxcatcher to the list, even though most other organizations consider him to belong in the lead actor category. 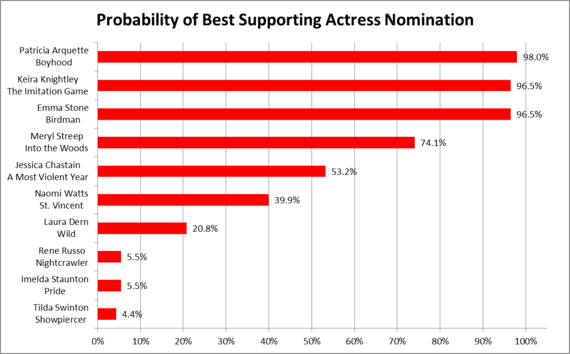 The best predictor of an Oscar nomination in the Best Supporting Actress category is a corresponding SAG nomination. However, the five SAG nominees are not the top five according to the math. Why not? Well, Naomi Watts received a SAG nomination but practically nothing else that's a good Oscar predictor. Jessica Chastain, on the other hand, received both a Golden Globe and a Critics Choice nomination. While neither of those individually is more important than the SAGs, the combination is.

Patricia Arquette has the lead here due to her Golden Globe win, but Keira Knightley and Emma Stone are almost as likely to hear their names called Thursday morning.

These are just five of the twenty-four categories, but unfortunately, predicting the other nineteen accurately requires using nonmathematical factors, such as personal opinions or general buzz. While that's a perfectly valid way to analyze the Oscars, my column sticks to the conclusions that can be made purely on the basis of data.

And all of that data is now in, so all that's left to do is wait until the nominations are announced this week. And then, the real fun of Oscar season begins.