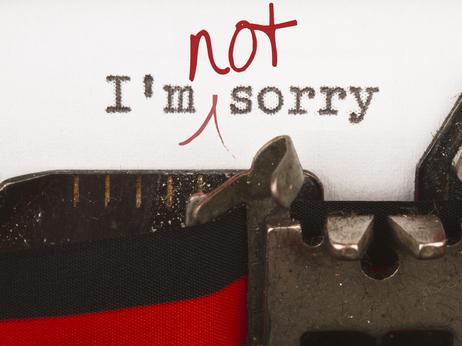 So 2014 is done and buried and everyone's talking resolutions but, frankly, I'm over that notion.

Not that I don't believe in self-improvement -- I do, oh do I -- but I'd rather frame the quest for such as the pursuit of goals, not vague promises.

Of course I have tons of goals this year; one of the biggest, perhaps, is an intent to cut back on my use of the word "sorry."

This is not to say I will not apologize when it is appropriate for me to make amends, but rather that I'll stop using the word when it is absolutely stupid and self-defeating for it to come out of my mouth.

Lately I've heard myself saying that word way too much in various situations -- often of the work variety. Someone falls short on a commitment, misses a deadline or otherwise absolutely flakes on an agreement and there I am saying something like "I'm sorry, but I really need this done."

Just reading that drives home how infuriating it is (to myself) that I'd ever say utter such a phrase. It's so absolutely self-defeating and counter-intuitive.

Sorry? No, actually I'm annoyed, frustrated or even angry. The only thing I'm truly sorry about is having to deal with the situation at hand.

I know why I do it of course -- to make myself seem like less of a bitch as I try to get someone else to follow through on their job or obligation. It's what I say to soften the blow when someone else is clueless, rude or aggravating.

Well, 2015 is officially the year in which I will call bullshit on myself for saying such things because unnecessarily saying "I'm sorry" does more damage than good.

A 2014 Fast Company article explained that over-use of the word "sorry" can "undermine a woman's gravitas," thus making her "appear unfit for leadership."

This will be the year in which I vow to no longer care if you think I'm too bossy for asking you to follow through on an obligation or do your job correctly.

If that makes me a bitch, then so be it. I hereby declare 2015 to be the #YearOfTheBitch

Sorry not sorry? No, just plain not sorry at all.