Early voting has started in a number of states and we're getting the first hard data on actual voters. So, it is time to start digging into the data to get a sense of where the 2016 presidential election stands.

There are three huge grains of salt to throw on top of the small tea leaves I'm about to read.

First, only a small slice of the electorate has requested a ballot or voted one. There are two types of early voters: those who find themselves in a situation where they must vote an absentee ballot, like our military stationed abroad, and those who choose to vote early. For the latter, only the most hardcore political junkies vote the earliest because they follow politics closely, know where the candidates stand, and are comfortable with casting a ballot. Early voting is just a dribble now, with 9,525 people who have voted (in the reporting states and localities). Over 100 million people will vote, and the pace of early voting will naturally increase as we approach Election Day when more people finalize their choices.

Second, voters' behaviors are affected by the early voting options offered by election officials, which can change from election to election. These are just some of the changes. Massachusetts, Minnesota and New Jersey will offer expanded early voting options for the first time in a presidential election. Colorado has moved to all-mail ballot elections, with in-person voting centers where eligible people can register and vote any time during the voting period. In 2012, Florida adopted semi-permanent absentee ballot status where mail ballot voters can request to vote-by-mail in the next election when they mail in their ballot, and we saw an increase of mail balloting in 2014. Ohio will send out absentee ballot requests to all registered voters who cast a vote in the 2012 or 2014 general elections. Iowa started their mail balloting slightly later than 2012 due to slower printing of ballots.

Third, the campaigns can change their mobilization strategies. Republicans have traditionally not placed much emphasis on early voting, or voter mobilization in general. This is not a deficiency, but a recognition that the Republican coalition is composed primarily of older, wealthier, and better educated people who have established ties to their communities and thus more often fit the profile of a likely voter. It is the Democratic coalition that is primarily composed of younger, poorer, and less educated people who more frequently move that more often need voter mobilization. These folks are also more often found in urban areas, which are thus fertile ground for campaign offices to base Democratic mobilization efforts. There is an interesting twist in this election, in that lower-education rural Whites have shifted their allegiances more towards the Republican Party. How the Republican Party will effectively mobilize this hard-to-reach constituency remains to be seen. And while the Democrats need greater voter mobilization effort, the Republicans have taken notice of Democrats' organization, and began beefing up their early voter mobilization in key 2014 Senate elections.

Now on to reading the tea leaves!

We do not know who early voters have voted for. By law, election officials cannot begin to count ballots until Election Day. Still, there are some clues in the party registration (if a state has party registration) and demographics of early voters. Early voting statistics can be a bit of a Rorschach Test that entices partisans to see victory for their favored candidate. I see early voting statistics to be another piece of the puzzle to fit in with polling numbers that gives us a clearer picture of where the election stands. Since it is still very early, I will focus on the ballots that voters have requested, rather than the ballots that have been returned.

North Carolina
The best early voting statistics are available for North Carolina, which has been voting since September 9th. Requests for absentee ballots by registered Democrats and Unaffiliated registered voters are running ahead of 2012, for the same number of days prior to the election. Requests by registered Republicans is down. Given that Mitt Romney beat Barack Obama by two percentage points, the early voting statistics appear to confirm polling averages which show a narrow lead for Hillary Clinton. 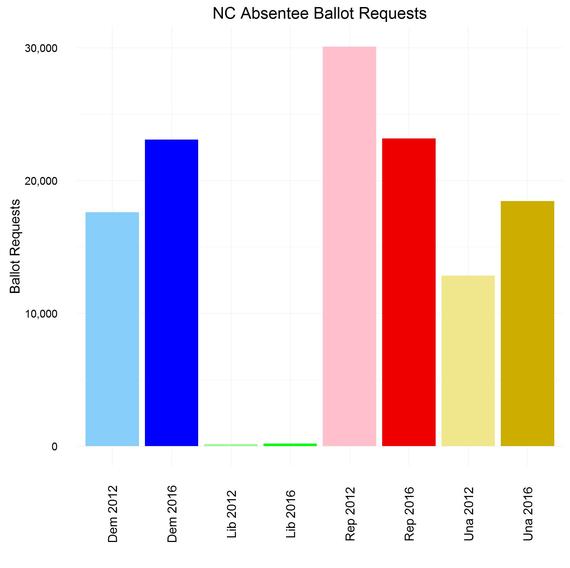 Maine
Maine splits its Electoral College votes, awarding one delegate to the winner of each congressional districts and two to the overall winning. Statewide, the party registration composition of absentee ballot requests appears similar to 2012, with a slightly lower pace among unaffiated voters. Digging down within congressional districts reveals an interesting pattern that supports polling indicating Maine could split its Electoral College votes for the first time. The number of requests in the First Congressional District looks similar to 2012, again with a slightly lower pace among unaffiliated. In the Second Congressional District requests are down across the board, with the steepest decline among registered Democrats. Another feature worthy of note is that the total number of requests in the Second Congressional District are running lower than the First, which is why Maine as a whole may still tilt towards Clinton. 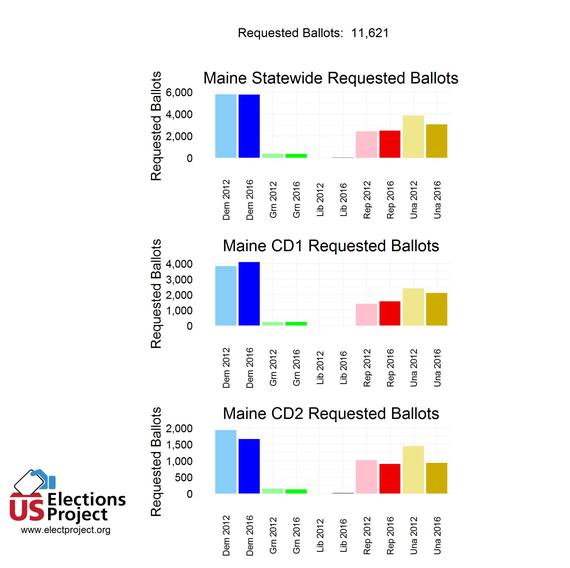 Iowa
Polling in Iowa indicates Donald Trump has a narrow lead over Clinton, and the early voting statistics may back this up. I'm a little more cautious here because Iowa got off to a slower start than 2012 in printing its absentee ballots and it could be that the parties delayed their absentee ballot drives. As evidence of campaign effects, it is instructive to compare registered Republicans' absentee ballot requests to 2014 (the 2014 same-day comparison is off by two days since the Iowa Secretary of State did not begin reporting until Sept. 21, 2014), when the party initiated more a robust absentee ballot drive campaign than in 2012. Democratic absentee ballot requests are down from 2012 by about a half, while Republican requests are down from 2014 by about a third. Again, this could be a campaign effect, but the numbers are consistent with Maine's Second Congressional District, showing Trump doing better where Democrats are less engaged. 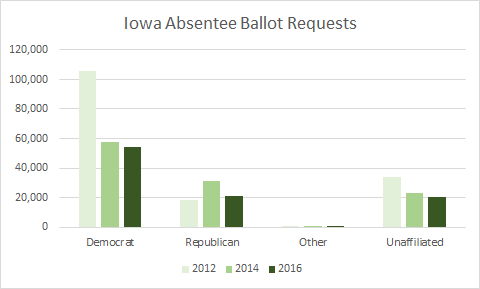 Other States
There are other states that are reporting early voting statistics, such as Delaware, Florida, Georgia, Ohio, Wisconsin and Virginia. However, there is incomplete reporting in these states or there is no reliable 2012 comparison. I'll continue monitoring these states and report observations as warranted.

What Did We Learn This Week?
The Iowa, Maine, and North Carolina early voting statistics appear to confirm the polling averages, showing a Trump with a slight lead in Iowa, Maine splitting its Electoral College votes in the First and Second Congressional Districts, and Clinton running slightly ahead in North Carolina. Again, I can't say this enough: these are the earliest early voters and this is a weak signal that will get stronger as Election Day approaches as the trickle of early voters becomes a flood.

Also of interest is that Clinton does better where voters appear to be more engaged, as measured by absentee ballot requests, and Trump does better where interest is running lower. This has important implications for polling, as Clinton does better among the universe of registered voters and less so among likely voters. A secret sauce of many pollsters is their likely voter models, and their modeling choices can be as large as simple statistical sampling error. Since voter turnout target turnouts are a component for many polling models, it is important for pollsters to reveal predicted turnout rates and what they think the electorate will look like.

The varying levels of engagement across states and regions strikes me as different from past elections. Usually, we are all in the same boat when it comes to interest and participation in the election. When the turnout tide rises, it generally rises across all states. This election may be different in that the boat is being rocked by a wave, whereby turnout will be higher than normal or lower than normal in some places. If this is true, state and national polls may be correlated in different ways than in the past. This in turn could affect the more sophisticated poll aggregators' models which incorporate national and state correlation estimates.

There will be more in the following weeks. In collaboration with the Associated Press' Election Research Unit, I am posting early voting statistics here. I also post on Twitter @ElectProject detailed early voting charts like the ones in this blog post for states that release detailed data. So, I welcome you to follow along!