How many Americans are already paying close attention to the 2016 presidential campaign? Just a quarter, according to the latest CBS News/New York Times poll, and that’s not unusual over a year and a half prior to the election.

Nearly every week more potential candidates are announcing their intentions, resulting in a flurry of media coverage and polls. But historical data show that political junkies are the minority. The reality is that most people won’t pay close attention to the election until the primaries next year or even right before ballots are cast next November. Almost half will never pay close attention.

Since 1987, Pew Research has asked this survey question: “As I read a list of some stories covered by news organizations this past week, please tell me if you happened to follow each news story very closely, fairly closely, not too closely, or not at all closely. News about candidates for the [relevant year's] presidential election. ...”

This chart, which updates one that political scientist Charles Franklin did for Pollster back in 2007, shows the share of Americans who said they were following news about presidential candidates "very closely" in election cycles from 1988 through 2016. The starting point varies, but in every case Pew asked the question at least 15 months ahead of the November election. In recent cycles, the question was asked 21 to 22 months out. 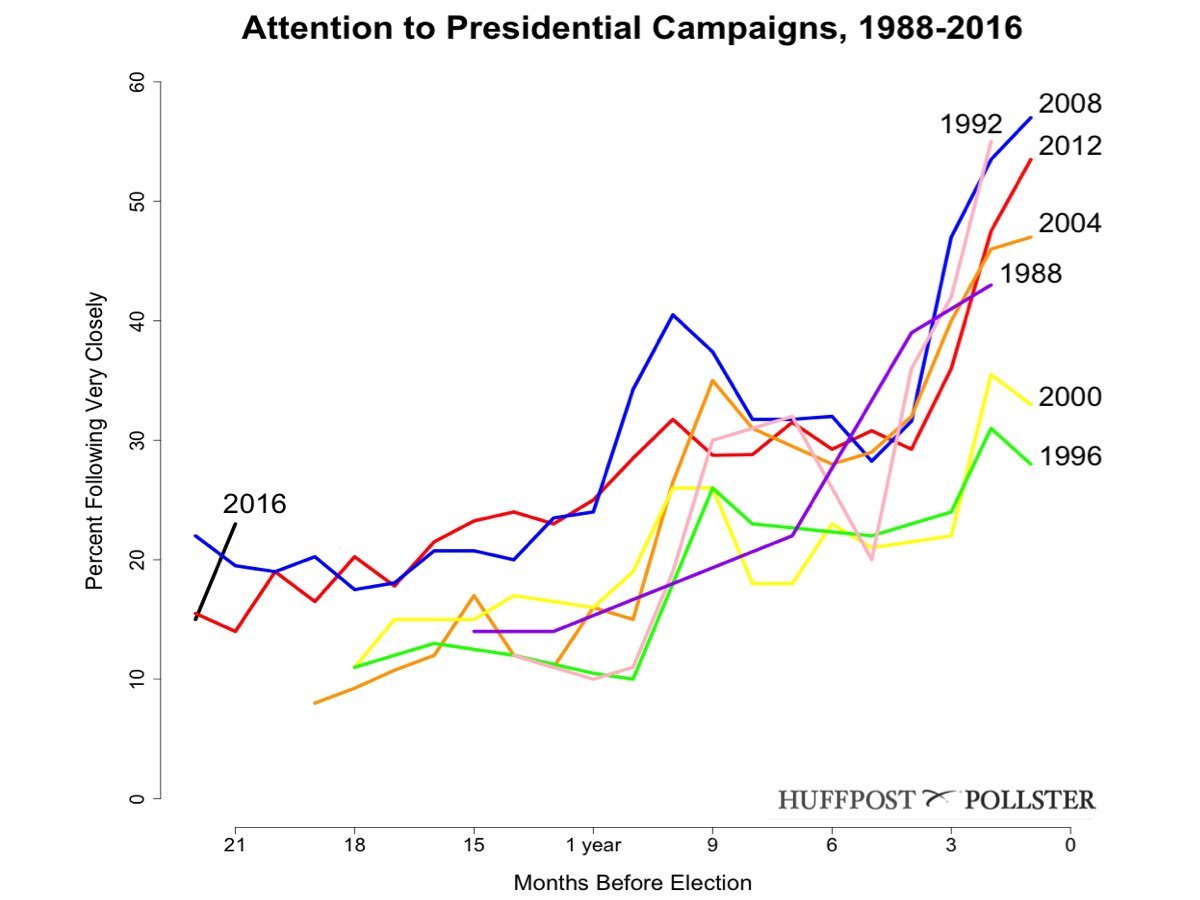 The share of Americans paying close attention to the race for the White House starts out low -- under 10 percent in 2004 and not much higher in most other years. 2008 is the only cycle in which more than 20 percent were really following the race early, but even in that cycle, attention waned a bit before it began climbing toward Election Day.

According to Scott Keeter, Pew's director of survey research, “The big reason for low levels of attention to the campaign at this point in the cycle is that most people just aren't that interested in politics. Combine that with a general sense that nothing going on right now matters very much for the actual outcome, and you can understand why so few people are following at this point.”

These primary increases are usually somewhat temporary, though. Attention drops after the first few primaries, and the next upswing doesn't begin until about four months before the election.

Even in the last month before Election Day, there’s quite a bit of variance in what proportion of Americans are really following the contest. In 1992, 2008 and 2012, over 50 percent of Americans were paying close attention to coverage at the time of the election. In 1996 and 2000, barely 30 percent were following closely at the time of the election.

This May marks 19 months before the 2016 presidential election, so we don’t have much data yet on this cycle. In fact, Pew has not asked the attention question yet -- although it has asked a slightly different question on how much respondents have thought about candidates.

Prior to the May CBS/NYT poll, we had one estimate of 15 percent paying “a lot” of attention from a CBS News poll in February and one estimate of 23 percent following election news “very closely” from a March YouGov poll. Those questions were both worded differently from the Pew question, and YouGov polls are conducted online whereas Pew and CBS surveys are done by phone. That means we can't make a direct comparison with Pew's historical results, but we can see that the 2016 campaign is not drawing many eyes yet.

The May poll shows a slight uptick to 26 percent paying a lot of attention, but that still leaves nearly three-quarters of Americans relatively uninterested in news about the 2016 race. So, political junkies, be patient with everyone else if they don’t know each candidate’s views on immigration policy. It’s not water cooler worthy yet for the vast majority of Americans.

Don't Care About The 2016 Election Yet? You're Part Of The 74 Percent
Declared 2016 Presidential Candidates