If you want to understand the temperaments and governing philosophies of the Republican presidential candidates, pay close attention to the way they talk about an iconic moment of President Barack Obama’s tenure: His decision, in the spring of 2009, to rescue Chrysler and General Motors.

Most of the top GOP contenders have said the decision was a mistake. The latest to do so was Rick Perry, the former governor of Texas, who boasted Friday during MSNBC’s “Morning Joe” that he was against all bailouts -- including the one for General Motors. “When corporate leaders make bad mistakes, they need to be held accountable, whether they are on Wall Street or on Main Street,” Perry said.

Perry and the other Republicans critical of the auto industry rescue might sincerely believe it was the wrong policy. Or they might simply fear the wrath of Republican primary voters who can’t stomach support for an initiative that came from Obama. Whatever their motives, Republicans who say they would not have extended the same lifeline that Obama did need to reckon with a key fact:

By nearly all accounts, the 2009 rescue package saved a vital U.S. industry and, just maybe, the economic fortunes for an entire region.

FROM GENERAL MOTORS TO GOVERNMENT MOTORS

Six years after the fact, it’s easy to forget the dire plight that Chrysler and General Motors faced at the time. Decades of poor decision-making by management and labor had saddled the firms with manufacturing capacity they couldn’t use, wage and benefit obligations they couldn’t meet, and, yes, cars they couldn’t sell. Unlike Ford, which had confronted and addressed similar problems while it still had time to save itself, Chrysler and GM had postponed their reckoning until late 2008 -- the very same time that the collapse of the financial and housing markets had thrown the economy into a deep recession.

They came to Washington for help and the Bush administration obliged with an emergency, short-term loan eventually worth about $23 billion -- enough to last until the spring, when the newly elected Obama could make up his own mind about what to do. (Before Obama took office, his advisers had quietly urged Bush to keep the companies going, according to a memoir subsequently written by former White House adviser David Axelrod.)

With full control over the situation, and following intense debate among his aides, Obama decided to offer the car companies a deal. The government would infuse Chrysler and GM with federal dollars, but it would also take control of them -- steering the firms into bankruptcy and then managing a massive restructuring of operations so that they could become profitable once again.

To justify such extraordinary measures, Obama cited the extraordinary circumstances: At a time of economic crisis, the president explained, the collapse of Chrysler and GM would likely have severe repercussions, wrecking not just two iconic American companies but also the myriad businesses -- from parts suppliers to mom-and-pop restaurants near factories -- that depended on the two companies. The damage could even drag down Ford, Obama warned, despite that company’s relative health.

Obama’s arguments did not go over particularly well with the public, which was angry over bailouts of banks and the apparent insolence of the auto executives, who flew to Washington on private jets in order to make their appeals. But the decision to save Chrysler and GM most infuriated Republicans and their allies, who thought the federal government had no business meddling in the economy or taking over private corporations -- even, or especially, for the sake of saving firms that couldn’t survive on their own.

“Every dollar spent with GM is a dollar spent against free enterprise,” Hugh Hewitt, the conservative radio host, said at the time. Eric Cantor, then a Republican leader in the House, predicted “they’ll run it into the ground.” 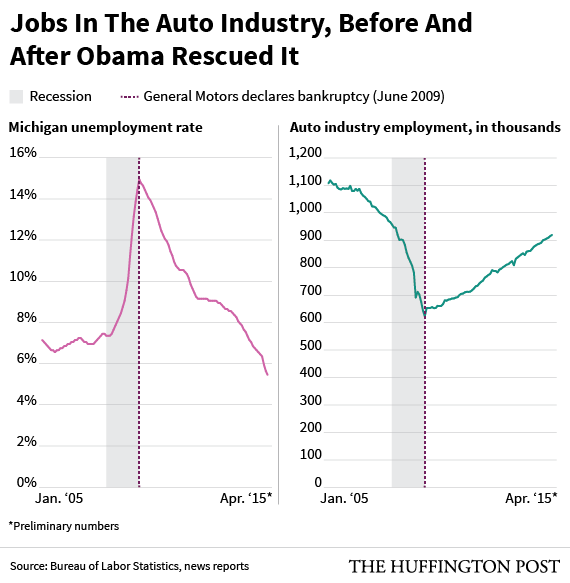 In the end, pretty much the opposite happened. Employment in the auto industry, which had been on a steady and then steep decline since 2005, hit rock bottom in June 2009 -- the same month GM declared bankruptcy and, under Obama administration supervision, started restructuring its operations. The ensuing transformation included plenty of pain, from shuttered factories to bondholders who lost money to an agreement, with the unions, that new workers would make less money than the old ones.

But the companies emerged from bankruptcy stronger -- in Chrysler’s case, after a sale to Fiat -- and they’ve been growing ever since. Jobs in automobile manufacturing began rising the very month that GM started its bankruptcy reorganization. Today, employment in the sector is back to where it was before the recession, according to the Bureau of Labor Statistics. The unemployment rate in Michigan and other states with large numbers of auto industry jobs began a similarly dramatic improvement around the time of the two bankruptcies. Today, Michigan’s unemployment rate is the lowest it’s been since 2001.

And while the companies still face problems, which for GM include the legacy of massive vehicle recalls and a business model heavily reliant on large vehicles, most analysts think they are on solid footing again.

The auto industry rescue isn’t the only reason that employment in the automobile sector and the Great Lakes states has rebounded. The economy a whole has grown since that time, albeit with some stalls, and that’s included a rebound in all manufacturing jobs, not just those in the automobile industry. But the reverse is probably true, as well. Without growth from GM and Chrysler, the recovery in manufacturing specifically and the economy overall might have been weaker.

How much weaker? A report from the Center for Automotive Research, which is based in Michigan and receives some funding from the auto industry, suggested that the rescue of GM and Chrysler saved as many as 2.6 million jobs in 2009. Car-making would have eventually migrated elsewhere, the research center found, including to other countries. Parts of the Midwest would have been devastated.

FROM ROMNEY TO RUBIO

The rescue’s success, particularly in politically contested states of Michigan and Ohio, was a topic that Obama raised at every opportunity during the 2012 campaign. His opponent, Mitt Romney, struggled to find a position, offering slightly different responses generally depending on when and to whom he was speaking. A Michigander by birth and son to a former auto industry executive who later became governor, Romney eventually settled on the argument that the problem wasn’t with the carmakers or their workers -- it was with Obama’s decision to put taxpayer dollars at risk.

Four years later, many of Romney’s would-be successors as Republican presidential nominee have adopted more or less the same posture -- opposing the rescue on principle, though making an effort to say they are glad the industry survived. Marco Rubio, the senator from Florida, told a New Hampshire audience a few weeks ago, “I don’t think that was the right way to handle it,” and called Obama’s approach “problematic.” (Rubio had also predicted that the federal government would never relinquish control of the companies. The government sold back its last shares in 2013.) Jeb Bush, the former Florida governor, has said on several occasions he opposes the bailout -- at one point calling it a “form of capitalism when the government intervenes in a very muscular kind of way. And I don’t believe that is appropriate.”

During a campaign stop in Michigan this week, Sen. Ted Cruz of Texas said Obama’s rescue was simply unnecessary. “I don’t think the federal government should be engaged in bailouts,” Cruz told a local audience. “Those industries would have [survived] and thrived.”

But few experts believe that today. Companies can’t emerge from bankruptcy if they can’t get financing to operate while they are reorganizing. And, when Chrysler and GM were in trouble, the banks were in no position to provide that kind of money. Steve Rattner, the Wall Street executive was lead adviser to Obama's automobile rescue team, later explained that relying on private sector loans "sounds like a wonderfully sensible approach -- except that it’s utter fantasy. In late 2008 and early 2009, when GM and Chrysler had exhausted their liquidity, every scrap of private capital had fled to the sidelines. I know this because the administration’s auto task force, for which I was the lead adviser, spoke diligently to all conceivable providers of funds, and not one had the slightest interest in financing those companies on any terms."

At one point in 2009, according to a separate report in The New York Times, Obama administration officials approached the partners at Bain Capital -- Romney's old firm -- to see if they could supply some of the money. They said no, which meant the government was likely the only financier available. And while taxpayers ultimately lost $9 billion on the transaction, according to the Treasury Department, it was a fraction of the total $80 billion loan and almost certainly far less than the government would have spent on assistance to help all of the workers a liquidation of Chrysler and GM would have displaced.

In the end, even the editors of The Economist -- staunch free-market champions who had opposed the rescue at the time admitted they owed Obama an “apology” because “the doomsayers were wrong.”

Of course, not every Republican candidate has spoken out on the auto industry rescue. Conspicuous among the silent has been Scott Walker, the governor of Wisconsin, who on a trip to Lansing, Michigan, last month, told reporters “that’s a hypothetical question in the past. We’re going to talk about the future.”

As MSNBC's Steve Benen noted afterward, Walker has been known to answer hypothetical questions when convenient. Given Wisconsin‘s longstanding ties to the auto industry, it’s possible that Walker may simply understand, better than most Republicans, how much those jobs mean in an area of the country critical to their presidential fortunes.

Behind The Scenes Secrets From People Who Worked At Dating Apps