The 2016 New Orleans Film Festival kicked off its 27th year by opening with the U.S. premiere of Rob Reiner's new film LBJ. That genius bit of programming was due to the high quality of the presidential bio film and the fact that it was shot in New Orleans. LBJ started the fest that ran from Oct. 12 to Oct. 20, closing with the re-release of the classic indie art film Daughters of the Dust. In between these two stellar movies, NOFF screened 238 films from 42 countries. 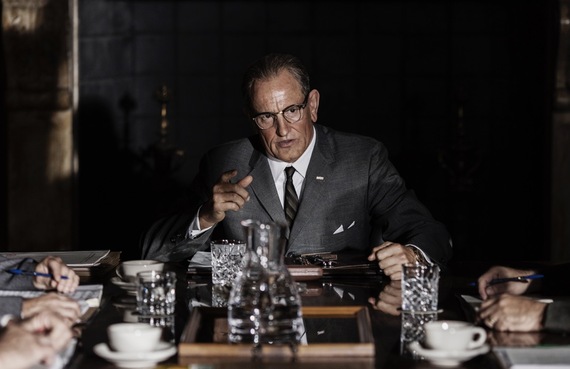 LBJ (***1/2) Capturing the essence of the 36th POTUS, who lived in JFK's shadow, is not an easy task. Surprisingly, director Rob Reiner, screenwriter Joey Hartstone and actor Woody Harrelson are up to the challenge and capture the tone and tenor of the man perfectly. Their Lyndon Baines Johnson is a dealmaker, lawmaker and social services pioneer (Medicaid, Medicare, Head Start Program) who few lauded. LBJ: "Kennedy is a show horse. But when you need your field plowed, you need a work horse."

Harrelson, with incredible makeup from Steve Koch (sculptor R-E-N), gets inside the tall, burly, crass Texan who found a way to pass the Civil Rights Act when the South wasn't ready for it. Jennifer Jason Leigh makes the perfect Lady Bird Johnson. Hartstone's witty and bawdy dialogue is consistently profane. Reiner makes this history lesson enjoyable.

72 Hours: A Brooklyn Love Story? (**1/2) A Love Jones relationship is filled with give and take, push and pull, breakups and reunions in this very cinema vérité look at a street-smart Brooklyn 16-year-old on the verge of attending college. Caesar (Melvin Mogoli) is supposed to enter school in 72 hours. But he is emotionally and psychologically anchored to downtown Brooklyn, his moody girlfriend Kaya (Andrea-Rachel Parker) and his best friends. Will he or won't he?

In his first feature writer/director Raafi Rivero exhibits some young Spike Lee mojo. He's great at setting up characters, conflict and presenting realistic dialogue. A little more work with dramatic structure and ending each act with flourishes and he will have a bright future. Excellent musical score.

Ella Brennan: Commanding the Table (****) Brennan restaurants have been a New Orleans tradition since 1946. And for many of those years the matriarch of the Brennan family has been the effervescent Ella Brennan who has guided her family's restaurant dynasty into stardom, particularly by winning the James Beard Foundation Award for Outstanding Restaurant for Commander's Palace, which launched the career of superstar chef Emeril Lagasse.

Director Leslie Iwerks chronicles the life and times of Ella, "The Berry Gordy of the cuisine world," as she walks her restaurants, befriends customers and shepherds her staff. What's on view is the liveliest bio of a restaurateur that has ever been made. Audiences also get a close-up view of the thriving restaurant scene and vibrant citizenry in New Orleans--before and after Hurricane Katrina. A highly entertaining and well-made documentary.

Jean of the Joneses (***) A very silly, but largely well-written comedy about three generations of a Brooklyn-Jamaican family becomes a guilty pleasure in its first five minutes. The central character is a novelist named Jean (Taylour Paige), a twentysomething on the outs with her white boyfriend (François Arnaud) and forced to couch-surf at her sister and mom's house until she gets her life together.

The soap opera-ish drama never stops: Estranged granddad shows up at family dinner and dies on the doorstep. Grandma (Michelle Hurst, Orange is the New Black) is having an affair. Auntie (Gloria Reuben) is separating from her husband and her unmarried sis (Erica Ash) is pregnant with a doctor's baby. Witty, funny and ought to be a web, cable or TV series. Torontonian writer/director Stella Meghie shows her best talent when the scenes are short and rapid-fire. Very sardonic and urban.

One Note at a Time (***) New Orleans gives musicians a safe haven, and in return those thankful artists ply their trade on street corners, in parks, at bars, concert venues and fancy restaurants. When Katrina hit, the performers dispersed around the country, returning later with a set of very specific health, psychological and career issues.

On view, thanks to the insightful director Renee Edwards, is the work being done by the New Orleans Musician's Clinic, which helps and monitors hundreds of musicians as they get medical attention, counseling and guidance along a career path that has gypsy-like work schedules, inconsistent paydays and a final calling to that big stage in the sky. As legendary New Orleans musician Dr. John delicately puts it: "You want to keel over after the last song in the set. Band gets paid and then you don't have to do an encore." A heartwarming non-fiction film.

Sicily Jass: The World's First Man In Jazz (**1/2) Italian documentarian Michele Cinque takes the very risky step of making a film about trumpeter Nick LaRocca who made one of the first jazz/Dixieland musical recordings back in 1917. LaRocca, years later, grew impatient with his place in the history of the art form, insisting that he created it. His son carries that torch in this controversial film.

Tape recordings of Nick LaRocca claiming that African Americans, who played jazz at the time, came after the fact will not endear him to many. Still, his story is provocatively told with photos, footage and very ethereally shot new footage of musicians/actors playing LaRocca's music in the streets the Italian town where his parents used to live. Film's title needs a question mark at the end. Provocative. A decently thought out thesis that doesn't hold water.

Two Trains Runnin' (***1/2) During the Freedom Summer of 1964, three civil rights workers lost their lives in Mississippi. At the same time, two separate carloads of white twentysomethings had set out to find bluesmen they'd admired who had seemingly disappeared. This very nostalgic doc works on several levels. It catalogs one of the most pivotal years of the civil rights movement while showing how music brings disparate people together in ways one can't imagine.

The journey of these optimistic and naïve youths through Ku Klux Klan territory is all the more mesmerizing thanks to the personal recollections of the participants, now senior citizens, who recall their gutsy sojourns. Precious archival footage of blues legends like Son House and Skip James are on view. As are glimpses of civil rights demonstrations, segregationists' rants and police brutality. Narrated by Common with performances by Gary Clark, Jr., Lucinda Williams and Buddy Guy.

Daughters of the Dust (***1/2) Back in 1991, DOTD was the first full-length film by an African-American woman to receive a general theatrical release in the United States. It's a crown filmmaker Julie Dash has worn since the premiere of this gorgeously crafted art film about a family dealing with the past and the future on a sea island off the coast of South Carolina. Set in 1902, the clan has close ties to its African past and is struggling with an intended migration to the north.

Jackson, a stirring documentary by filmmaker Maisie Crow about an abortion clinic's fight for survival in Jackson, Mississippi, won the Best Documentary Feature Jury Prize.
Five Awake won Jury Prize for Louisiana Feature, thanks to directors Donna Dees and Susan Willis who brought needed attention to domestic violence.
The Other Kids, which won the Jury Prize for Best Narrative Feature is a mix of fiction and non-fiction helmed by director Chris Brown who got teens to talk about their personal stories. (Click here for a complete list of winners.)

Highly praised films that have been on the festival circuit (Moonlight, Lion, Manchester by the Sea, I Am Not Your Negro, etc.) were also an integral part of the exceptional programming that gave audiences previews of movies that will come to theaters later this year and into the next one.