Early general election trial heats tell us little, but pollsters have other questions to ask. Chris Christie's negatives are higher than those of past nominees. And what's the point of the margin of error, anyway? This is HuffPollster for Monday, January 26, 2015.

GENERAL ELECTION 2016 POLLS DON'T PREDICT MUCH, YET - Jason Linkins: "[L]eading up to any presidential election, there will be months in which the head-to-head polling of the race is very accurate and other months in which it's very inaccurate. I've prepared a little guide here, ranking the 10 best months for polling accuracy for the next presidential election, in order from least to most accurate.

As you can see, if you're a reporter and you want to obtain the most accurate possible snapshot of who is going to win a presidential election from a pollster, the best time to call him up is between twenty and fifty days after the election....At this point, you may be wondering, 'Well, if polling is so inaccurate until you get very close to an election, why do they continue to do it?' The short answer is that pollsters ask many questions that are more interesting than 'Who would you vote for in this head-to-head matchup?' The answers just don't make for banner headlines." [HuffPost]

BUT EARLY NEGATIVES MAY BE A BARRIER TO CHRISTIE - Harry Enten: "We’re a long way from knowing who will be the Republican nominee for president in 2016. Early polling data, however, can give us a sense for who fits the profile of past nominees, and who doesn’t. Since 1980, two types of candidates have won presidential nominations when an incumbent president wasn’t running in their party: those who were unfamiliar to voters early in the campaign, and those who were both well known and well liked....no prior nominee had a net favorability rating more than 10 percentage points below where you’d expect given his name recognition. Christie is 25 percentage points off the pace. His net favorable rating among Republicans in an average of YouGov polls so far this year, a December Monmouth University poll and a late November Quinnipiac University poll is just +19 percentage points. That was despite 77 percent of Republicans being able to form an opinion of him." [538] 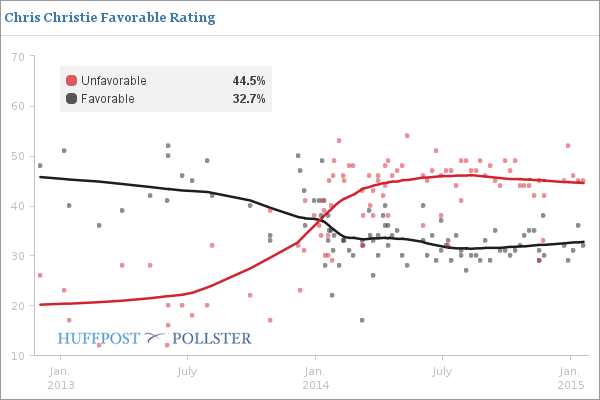 -Sponsors reschedule the webinar debate on the "margin of error' for Wednesday, January 28. [Peanut Labs]

-African Americans see the lack of diversity in this year's Oscars as part of a longstanding problem. [YouGov]

-The U.S. still lags other nations in its percentage of female leaders. Pew

HUFFPOLLSTER: What 2016 Polling Tells Us, And What It Doesn't
Hillary Clinton

1 / 30
Hillary Clinton
NEW YORK, NY - MARCH 07: Former United States Secretary of State Hillary Clinton arrives at the event 'Equality for Women is Progress for All' at the United Nations on March 7, 2014 in New York City. The event was part of the United Nations International Women's Day, which is celebrated tomorrow, March 8. (Photo by Andrew Burton/Getty Images)
Getty Images