A flurry of presidential polling still finds support for Hillary Clinton among Democrats and no clear GOP frontrunner. The Republican Party's image is considerably improved post-election. And Americans are starting to hear better news about jobs. This is HuffPollster for Wednesday, December 17, 2014.

2016 PRIMARY POLLS - National pollsters turned their attention to the developing 2016 presidential race Tuesday, releasing new horserace numbers for the nomination contests of both parties. These early readings require many disclaimers: Sample sizes are typically small, with roughly 400 interviews for each party, and the polls often include those who either identify or "lean" to a party rather than trying to nail down the likely primary and caucus electorate. Initial support is also tenuous, reflecting little more than a reaction to the most familiar names listed. The results of a Monmouth University poll, which asked an open-ended vote preference question, rather than providing a list of suggested candidates, illustrates the softness in early support. For example, while roughly nine of ten Republicans offered support for a candidate listed by the McClatchy/Marist, ABC/Washington Post and Fox News Polls, just over half could name a candidate on the Monmouth poll without prompting. [Marist, ABC News, Fox News, Monmouth] 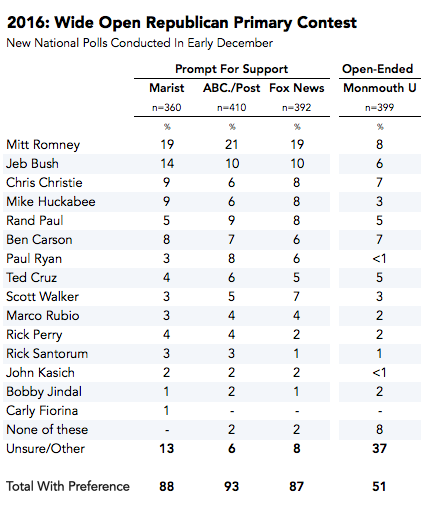 Clinton leads among Democrats - Former Secretary of State Hillary Clinton is the overwhelming favorite in the Democratic side, with just over 60 percent support when Democrats are prompted for their choice on the McClatchy/Marist and Fox News polls, and just under 50 percent on Monmouth's open-ended question. Although Clinton's dominance made it easier for Democrats to name a choice without prompting, nearly 40 percent were still unable to volunteer a preference. 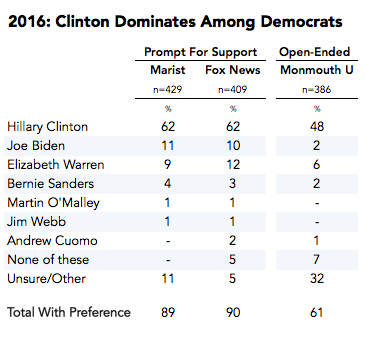 NBC/WSJ: Clinton an early frontrunner, 'barely' - Mark Murray: "Call Hillary Clinton the early presidential frontrunner - but barely. That's the result from a new NBC News/Wall Street Journal poll, which finds that half of American voters - 50 percent - saying they could see themselves supporting her if she runs for the White House in 2016, while 48 percent oppose her...Despite these numbers - which could certainly change as the presidential field becomes clearer - Clinton is far from a lock on the presidency. A whopping 71 percent of American voters want the next president to take a different approach than President Barack Obama's; Clinton served as his first-term secretary of state. And by 40 percent to 38 percent, voters prefer a Republican to win the White House in 2016 instead of a Democrat." [NBC News]

So the polls can say something about who the front runners are... - Aaron Blake: "Whenever someone complains that polling this far out doesn't matter, we sigh just a little. Hillary Clinton's poll standing, after all, is pretty indicative that she's the favorite for the Democratic nomination. That's an extreme example, but you get the idea. In the GOP field, though, this is all just guesswork. And you could make a pretty strong argument that Romney and Bush only lead because they have the most familiar names. And in that sense, their standings are kind of underwhelming." [WashPost]

...Or maybe they can't - Jonathan Bernstein: "Ignore those polls! OK … mostly ignore the polls. They are worth paying attention to only to the extent that party actors care about them. That’s not nothing. It’s very possible, for example, that some Democrats will believe that Hillary Clinton’s outstanding poll numbers mean she has a lock on the nomination. They might react by endorsing her instead of urging other candidates to run and, as a result, she could win easily even if she had been vulnerable. Similarly, Republican party actors trying to sort through the complicated field of candidates might use early polling to make choices. That would have important consequences. But by themselves early polling numbers are almost useless. Voters aren’t engaged this early. The surveys are measuring only name recognition and, to a lesser extent, vague impressions of the candidates who are well known." [Bloomberg]

IMAGE BOUNCE FOR THE GOP - Dan Balz and Scott Clement: "Republican victories in the midterm elections have translated into an immediate boost in the party’s image, putting the GOP at its highest point in eight years, according to a new Washington Post-ABC News poll. The spike in the party’s standing comes after Republicans picked up nine seats to take control of the Senate, raised their numbers in the House to the highest level in more than half a century and added new governorships to its already clear majority. In the new poll, 47 percent say they have a favorable impression of the Republican Party, compared with 33 percent in the month before the midterm elections. An equal percentage have an unfavorable view, which marks the first time in six years that fewer than half of Americans said they saw Republicans negatively….Public impressions of the Democrats are now a bit worse than those of the Republicans and overall more negative than positive." [WashPost]

CELL-ONLY PERCENTAGE RISES AGAIN - Stephen Blumberg and Julian Luke: "Preliminary results from the January–June 2014 National Health Interview Survey (NHIS) indicate that the number of American homes with only wireless telephones continues to grow. More than two in every five American homes (44.0%) had only wireless telephones (also known as cellular telephones, cell phones, or mobile phones) during the first half of 2014—an increase of 3.0 percentage points since the second half of 2013. More than one-half of all adults aged 18-44 and of children under 18 were living in wireless-only households." The report finds that 43.1 percent of adults now live in households with wireless service only, while another 16.6 percent live in "wireless mostly households -- defined as households with both landline and cellular telephones in which all families receive all or almost all calls on cell phones." All totaled, 59.4 percent of adults were living in cell-only or cell-mostly households in the first half of 2014. [CDC] 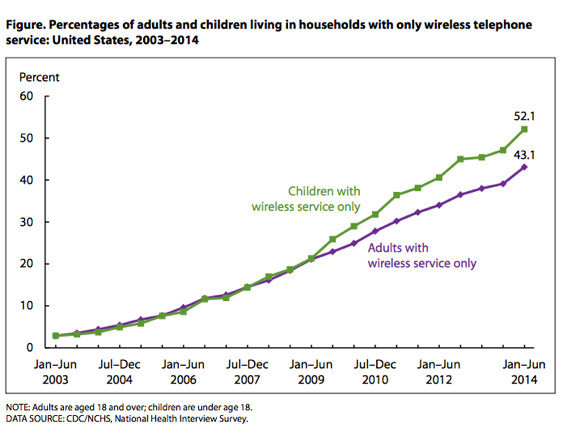 -Nate Silver isn't sure if Jeb Bush is too liberal for the Republicans, but judges him closer to nominees Romney or McCain than also rans Huntsman and Giuliani. [538]

-The belief torture can be justified spans most demographics. [WashPost]

-Anna Greenberg argues that Democrats can do more to boost income than increase the minimum wages. [The Hill]

-Mondays actually are the worst, according to new Bureau of Labor Statistics data. [538]