Right now, the 2016 stories are all about individual presidential candidates -- Hillary and Jeb and Rand and Ted and maybe Martin. But let's just put aside what they're eating for lunch, and try to predict which party is most likely to win the White House next year.

Will the Republicans have a leg up after eight years of a Democrat in the Oval Office, or will the Democrats have an advantage because of an improving economy (assuming it keeps growing in the next 18 months)? The arguments fly back and forth, often backed by historical data and sophisticated-looking charts.

Many news and blog articles from journalists and academics will try to tell you that what’s happened in the past informs us about what will happen in 2016. Their anecdotes, data and charts assume the predictive power of a relationship between past presidential elections and some other piece of information. We’ve had presidents for over 200 years, so history is convincing, right?

Not always. Some skepticism is actually warranted. Presidential elections are not frequent enough, or similar enough, to make very many conclusions based on prior contests.

This cartoon from xkcd shows how easily you can find something unique about each election. Every president won in some singular way, but that unique factor may have had nothing to do with his victory. The same premise holds about similarities -- maybe there are similarities among the last 17 elections, but we can’t say with any certainty whether they mattered.

Data are not necessarily helpful under these circumstances. In statistical practice, a set of data with fewer than 30 observations is considered very small. Each presidential election is a single observation, so 17 elections equal ... a very small set of data. 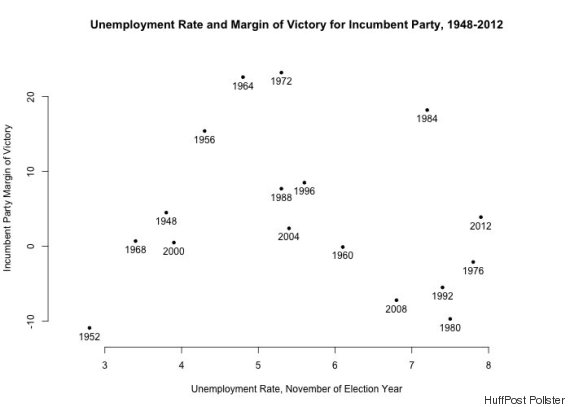 To use those data to predict what an incumbent party’s margin of victory might be in a future election, the analyst needs to draw a single line that basically expresses how the margin of victory has responded to the unemployment rate. But there are so few points, and they are so spread out, that it’s almost impossible to do that.

In the second chart, the red line shows the most likely statistical relationship between the unemployment rate and the incumbent party's margin of victory, but the dotted lines show the range of statistical uncertainty about that red line -- which is, in the context of presidential margins of victory, enormous. Statistically speaking, any one of the blue lines might represent the "true" relationship between unemployment and margin of victory, and they're all over the place. 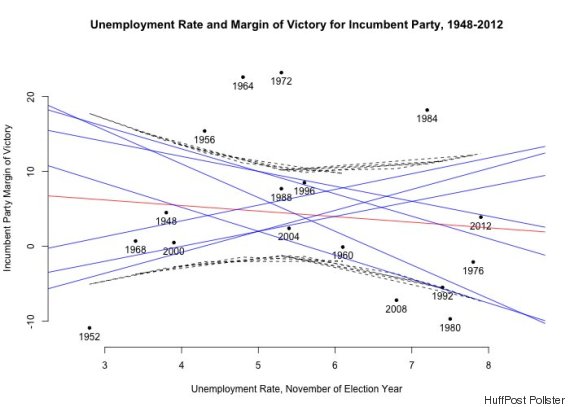 The lines trending downward would indicate that the incumbent party’s margin of victory decreases with higher unemployment rates. But the lines trending upward indicate the opposite -- that higher unemployment increases the incumbent party's chances of getting re-elected. The latter doesn't seem likely, but it can't be ruled out based on the available data. More data would reduce the range of uncertainty (i.e., bring those dotted lines closer together) and make us more certain of the relationship, but we don’t have more data.

One thing we can be sure of is that over the next year or so, political observers will be declaring how the unemployment situation affects the chances of a Democrat or a Republican winning in November 2016. They'll be trotting out many other factors that they say relate to victory and basing predictions on them, too.

Just remember that there’s usually a whole lot of uncertainty when there are only 17 data points.

Here's Why We Can't Predict 2016 Based On Past Presidential Elections
Which Women Might Run In 2016?

1 / 20
Hillary Rodham Clinton
Clinton certainly has the resume to be a strong presidential contender: two terms as the first lady during her husband's popular administration, eight years as a U.S. senator from New York and four as a widely-acclaimed secretary of state under President Barack Obama. Not to mention that she has already mounted a presidential bid once before, during the 2008 Democratic primary. With quite a following among Democrats -- particularly women -- and an expert campaigner as a husband, Clinton is one of the frontrunners for the 2016 nomination. In fact, if the Iowa caucuses were held today, a <a href="http://www.politico.com/blogs/burns-haberman/2012/11/exclusive-clinton-would-dominate-iowa-caucuses-ppp-149064.html">Public Policy Polling survey</a> found she would win 58 percent of the vote, outstripping the runner-up, Vice President Joe Biden, by a margin of 41 percent. Now the question is <a href="http://www.nytimes.com/2012/11/11/opinion/sunday/collins-hillarys-next-move.html?_r=0" target="_blank">whether or not Clinton will decide</a> to throw her hat in the ring in 2016. After her term as secretary of state ends this year, she has declared her intention to take a year off from politics entirely. And after that? Clinton says that she <a href="http://politicalticker.blogs.cnn.com/2012/10/18/hillary-clinton-repeats-no-2016-cant-stand-whinin-about-life-choices/">does not want to run</a> in 2016, but that hasn't quashed hopes to the contrary. <em>-- Sarah Bufkin</em>
AP