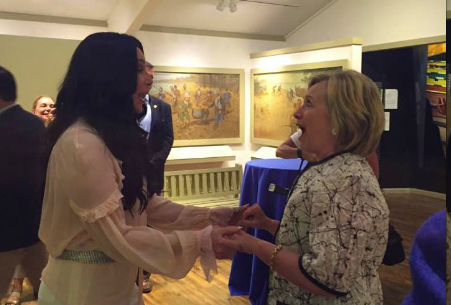 By any gay measure, 2016 will forever be the year the LGBTQ movement broke the glass political ceiling. A gay man is running Hillary Clinton's campaign. A presidential candidate marched in N.Y.C. gay pride. And Cher has joined Hillary on a mini-tour!

Deeper yet, we have The Equality Act for full federal equality topping the agenda. A bill to outlaw anti-LGBT discrimination nationwide, touted by the first female nominee as powerfully as she said "gay rights are human rights" on the world stage in 2011. We have nationwide marriage equality. And now - 50 years after the Civil Rights Act was passed -- the demand from civil rights leaders is to finally add LGBT Americans to that landmark icon of human dignity.

Step back to 2008, DADT & DOMA were still the law. We were endlessly pushing a sitting democratic president to say "yes I support marriage equality" and the Supreme Court was a far afield fantasy. We were the margin of victory in 2012, and yet demanding full federal equality was a bridge too far even for our own community.

Sadly despite this tremendous progress, in 2016 we are also still the grand GOP's last great hate-rod. The strategy is familiar and obvious now, this time a coordinated series of bathroom bills by Republican Governors and lawsuits by Republican state Attorneys General all geared to rile up that base. That base of judgment and hatred of gay people -- with a new political scapegoat: transgender Americans.

It will hopefully fail this time, but we don't know yet. This is a huge fight: the fight over our soul as a humanity. The forces of fear and anger, primordial, survival instincts, wielded by powerful men to manipulate the masses. Like the tools of corporations that keep us trapped in their machine. Scarcity, greed, materialism, all contrived. A better world awaits. If we can control our own minds, which is exactly what this is about. Will we choose love, or follow as sheep to anger?

The great irony in all of this is that queer people are at the crux of this showdown. And the showdown is epic. It's about good verses evil. About judgement verses love. About compassion and oneness, and spiritual brotherhood, and sisterly love. It's about community and social justice. It's about civil rights -- human rights -- the right of every human spirit to be safe, free and welcomed on Earth.

And by any measure 2016 is our turning point. Our cresting. We've won. We're here, we're queer, and we're on top. Our equality is the expectation of the body politic, of the cultural trend, of the new generation. Our respect is on the table. Our dignity is within grasp.

As this moment unfolds, reach for the gold. Soak up the times, this advancement, this arrival. Revel in its healing. And rinse in its relief. Shed the chains of oppression. The ideas that rot the spirit and poison the mind. Any suggestion that you are less.

We are the vessel calling the ultimate question. Bringing self-righteousness to its atoning knees. Revealing the ugliness of hatred. Bearing the brunt of the pain. We carry our brother's anger and transform it into music. We dance in the rain.

Welcome home faeries and queers, misfits and magic makers. Welcome home. We still have the world to save. Our children everywhere. So let the success empower us. As you feel welcomed and loved at long last. Our freedom is within sight. Blessed be being free.