Futurist Amy Webb's 2017 Tech Trend Report is out and should give journalists food for thought on paths to take, pitfalls to avoid, and plans to make heading into a dizzyingly changing environment.

For those enamored of technology and trendiness in media, there's still much to consider from an ethical standpoint in an era of "truthiness." 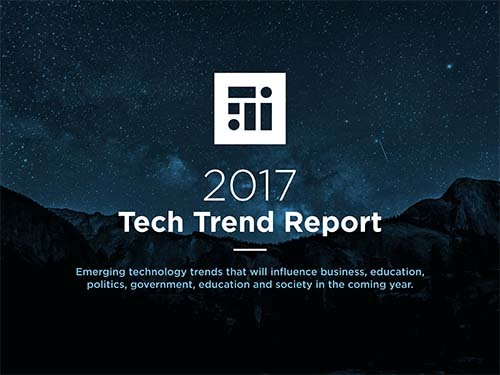 The report, the 10th annual compendium of the Future Today Institute (FTI), formerly Webbmedia Group, is an invaluable resource on how to tread given the convergence of technologies permeating various industries.

"A great wave of disruption - anchored in artificial intelligence, robotics, self-driving cars, genomic editing, cognitive computing, the Internet of Things, and big data - is underway. As these technologies move from the fringe to the mainstream, they promise to forever change how we live, work and play," Webb said in her welcome remarks.

On news, journalism, media and publishing, the report offers several new and recurring trends that will help shape the landscape next year.

A newbie this year is journalism as a service (JaaS), which could turn into a sustainable model rather than the profession just limping along with various types of paywalls. 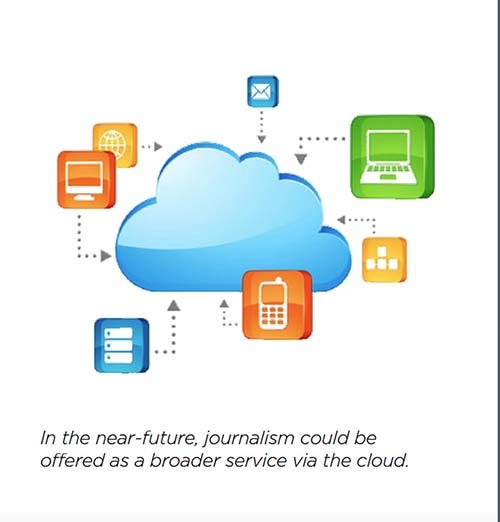 Journalism as a service (courtesy FTI)

"Transitioning to 'Journalism as a Service' would enable news organizations to fully realize their value to everyone working in the knowledge economy--universities, legal startups, data science companies, businesses, hospitals, and even big tech giants," according to FTI. "News organizations that archive their content are sitting on an enormous corpus-- data that can be structured, cleaned and used by numerous other groups."

How does one capitalize on that treasure trove?

News stories; vetted and fact-checked mini-biographies for other sites and digital services (to replace Wikipedia); verified, searchable databases of people and organizations. An AI-powered service that automatically generates a short report of the opinions on a particular subject, along with a list of quoted experts. A calendar plug-in that summarizes the most important news events to pay attention to during the week. All of these services could work outside of the social media landscape, which means that news organizations would not have to share revenue or give away their content for free, but could charge for access. 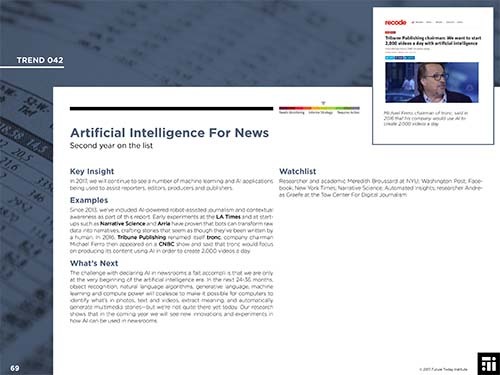 Dynamic listicles - short-form explanatory writing using a list as its structure - also made their debut in this year's report.

FTI said they were the bread and butter of newer startups and which founder Webb spoke of at the Online News Association conference in September.

"They can be used for a number of different stories: elections, breaking news events, public health epidemics, sports and more," the report explained. "News outlets of all sizes and journalists working inside of various organizations are now starting to experiment with them."

Speaking of elections, fact checking has become an urgent necessity following the surreal 2016 U.S. presidential race that catapulted "post-truth" into the American lexicon. 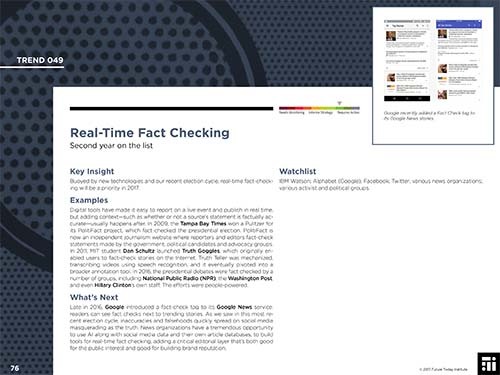 In 2009, the Tampa Bay Times won a Pulitzer for its PolitiFact project, which fact-checked the presidential election. PolitiFact is now an independent journalism website where reporters and editors fact-check statements made by the government, political candidates and advocacy groups.

For the second year, FTI said machine learning and artificial intelligence applications for news would continue being used to help reporters, editors, producers and publishers.

"In the next 24-36 months, object recognition, natural language algorithms, generative language, machine learning and compute power will coalesce to make it possible for computers to identify what's in photos, text and videos, extract meaning, and automatically generate multimedia stories - but we're not quite there yet today," it said, noting it was still the very beginning of an AI era in newsrooms.

Another second-year trend is one-to-few publishing, which includes newsletters, podcasts and niche networks for smaller audiences.

"Suddenly, it seems like everyone--from world leaders, to your next-door neighbor - has a podcast, newsletter or both," FTI said. "This is due in part to services like Mailchimp, TinyLetter (owned by Mailchimp), Skype, Google Hangouts, Garage Band, SoundCloud, Libsyn, Stitcher, Auphonic, SpeakPipe and a host of affordable smartphone microphone attachments." 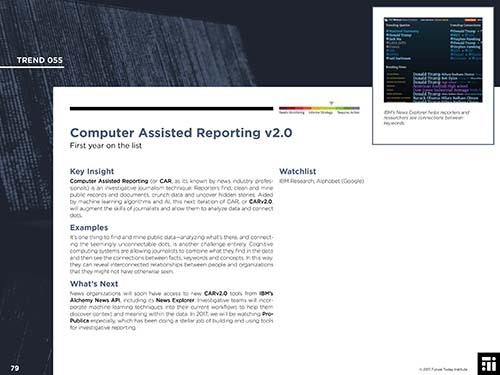 It also expected the launch of more niche networks and niche-focused digital magazines in 2017, as research showed there was profit to be made from them.

Ubiquitous video, a newer incarnation of computer-assisted reporting and media consolidation are three other 2017 trends to which journalists should pay heed.

FTI reminds us that all trends share a set of conspicuous, universal features:
They're driven by a basic human need, one that is catalyzed by new technology;
they're timely, but persist; they evolve as they emerge; and they can materialize as a series of unconnectable dots that begin out on the fringe and move to the mainstream.

The report is a must-read.