Three weeks ago, an editor sent me a link to the browser version of the hot new game "2048," saying I should cover it for The Huffington Post. It was popular because it was simple: You swipe numbered tiles back and forth, combining like numbers -- two 2 tiles make a 4, two 4 tiles make an 8, and so on -- until you reach the final goal of a 2048 tile.

The game was getting media attention as it rose to the top of the App Store's Top Free Apps list, and other sources hailed its 19-year-old creator, Gabriel Cirulli, as a wunderkind for creating a simple game capable of such viral success.

I played the game for about 10 seconds before I told my editor that we should let this one go; it didn't sit well with me to write a piece that would inevitably lead users to download a clone.

Because it was very clear to me that "2048" was a clone, ripped from another game with almost identical gameplay, a cleaner and more beautiful design, and a catchy soundtrack. I had been playing that game, "Threes!", for about a month. 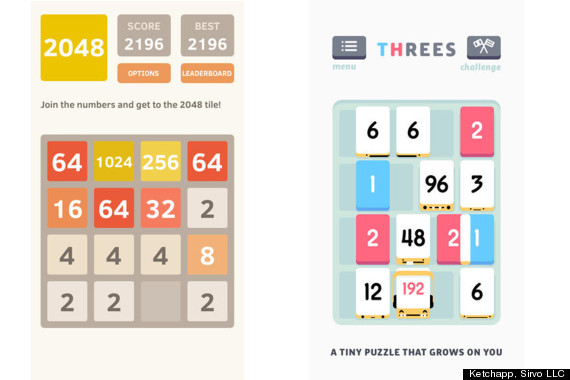 In the weeks after I passed on the story, other media outlets continued to chronicle the game's rise to popularity. Meanwhile, "Threes!" hovered relatively unnoticed near the No. 10 spot on the Top Paid Apps list. It was probably this media attention that led some to dub "Threes!" as a clone of "2048," as opposed to the other way around.

I wasn't the only one upset. A recent blog post by the "Trees!" development team -- which already has some hit games, such as "Puzzlejuice" and "Hundreds", under its collective belt -- revealed the amount of time and energy that went into creating the game. (It took 14 months and more than 500 emails, to be more precise). It also noted how seasoned developers tweaked and perfected the game before it was belittled to a knockoff of something a 19-year-old made in a couple of weeks.

Developers Asher Vollmer and Greg Wohlwend used the blog post to painstakingly detail their design process and to express their feelings on the subject of cloning:

We want to celebrate iteration on our ideas and ideas in general. It's great. 2048 is a simpler, easier form of Threes that is worth investigation, but piling on top of us right when the majority of Threes players haven't had time to understand all we've done with our game's system and why we took 14 months to make it, well... that makes us sad.

...We do believe imitation is the greatest form of flattery, but ideally the imitation happens after we've had time to descend slowly from the peak -- not the moment we plant the flag.

Clones are nothing new. (Everyone remembers wading through the seas of "Flappy Bert" and "Flappy Doge" knockoffs after the rise and fall of that other mobile gaming juggernaut, right?) But it's not hard to see why developers are going to strange lengths to protect their intellectual property (by trademarking the word "Candy," for instance) from those who would steal it to make a quick buck.

Here's the thing: "2048" isn't just a clone. It's a clone of another clone, "1024," which has gone relatively unnoticed in all of this. That's three games, without counting the clones that "2048" has inevitably spawned. 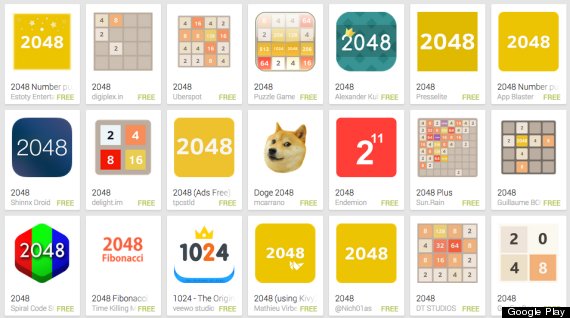 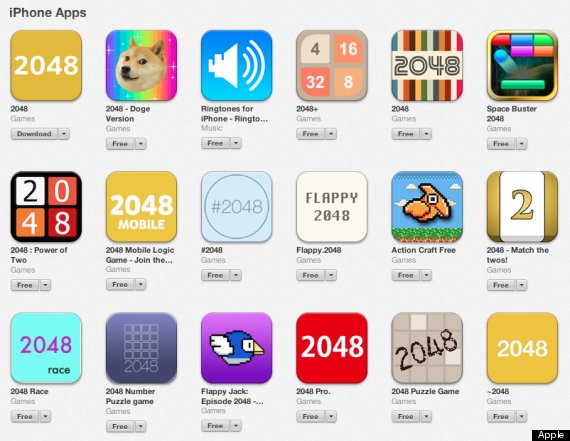 "I just wanted to make my own version with animations and slightly different gameplay, mostly as an exercise," he told the outlet.

Vollmer and Wohlwend humbly accept the existence of clones in their blog post, saying that it's all in good fun. I, on the other hand, am not so patient with the practice.

To me, turning "Flappy Bird" into "Flappy Doge" or "Threes!" into "2048," where the only difference is a change of color or minuscule change in gameplay, is like making a movie called "Indiana Johnson," starring Harrison Ford as a handsome archaeologist who travels the world singlehandedly defeating armies of Nazis while rescuing priceless artifacts from being used against humanity. But his last name is Johnson, so it's totally different from that other movie.

Ridiculous as it seems, some moviegoers would happily go see "Indiana Johnson," because it's practically the same movie so who cares? The same goes for the app markets. Every download of "2048," or any of its clones, means one less download of "Threes!" and, therefore, less profit to the developers who actually worked to create and execute the idea.

And it goes without saying that most game developers aren't George Lucas, able to protect their games with costly lawsuits, like the famed director and producer often tries to do with his movies. Making games might be their livelihood, and what takes them months to build takes a copycat only a few weeks to clone.

While this type of behavior is harder to discourage on Android, where an open platform means developers don't have to get their apps approved by a gatekeeper before sending them out into the mobile world, Apple holds developers to higher standards.

Any app that makes it onto the App Store is first approved by Apple. This ensures that it meets the market's quality standards and works as it should. So I have to wonder why part of this approval process doesn't protect developers by not allowing knockoff games. If a game can be judged by quality, can't it be judged by originality? Isn't that what standards are for?

By this point, "2048" -- the slimmed down, easier version of "Threes!" -- has been on the market for several weeks, and some of you may have already beaten it. (Good for you! It's a fun game.) But if you haven't, or if you're not sick of combining tiled numbers, I greatly encourage you to spend the $1.99 (is that really breaking the bank? Seriously? You spent more on a coffee this morning) to try "Threes!"

You'll be pleasantly surprised at the higher level of difficulty, you'll feel a bit more pampered by its elegant design. If nothing else, do it in the name of justice.

Been in a bunch of airports this past week. Seen people playing 2048 in all of them. This is frustrating =/