During the last 14 days the White House and President Obama have gone on the attack, and their strategy is pretty simple: "Let's acknowledge the voter anger and make sure it gets funneled toward something else." Thus we have seen political attacks on just about everyone -- and everything -- out there. The problem, though, is that voters aren't angry with Karl Rove, John Boehner, the Chamber of Commerce or even the "undisclosed financing" of elections. Voters are angry about the economy and they have two devastating perceptions of this administration: voters think it is incompetent and that it has overreached over the past two years.

An even bigger problem for the White House is that voters may have already tuned the President out; virtually every possible metric used to evaluate the outcome of the midterm elections suggest a massive GOP victory. So let's just come out and say it: there is no reason to think that Republicans will do any worse than 1994 (when they picked up 54 seats) and there is plenty of data to suggest that it will, in fact, be a better year for the GOP. Our projection -- based on all current available data -- is that the GOP will gain between 60 and 70 House seats in November. 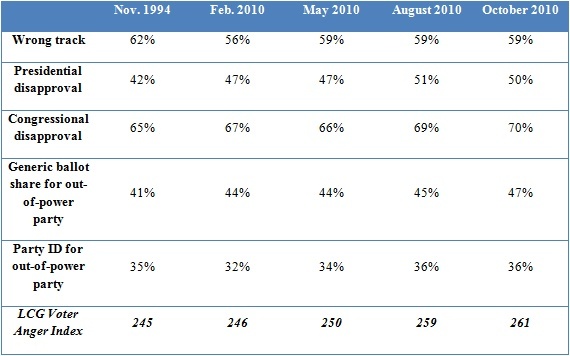 We are in agreement with several recent analyses suggesting that there are approximately 35-40 house seats that should be rated in the "toss-up" category. To simplify things we will refer to the RCP assessment that has 39 "toss-up" seats. They have identified 185 seats as either likely or lean Democrat and 211 as either likely or lean GOP. In each of the remaining 39 "toss-up" races the Republicans and Democrats have been polling within points of each other--many are within the margin of error. So let's assume that these 39 races split 50/50, giving the GOP a 20-set pick up. That gives the GOP a 53-seat pick up and control of the House. But a more realistic analysis suggests that in this current environment--keeping in mind the above voting metrics and the GOP turnout advantage--the GOP will win approximately 70% of the toss-up seats. That would mean a total pickup of 60 seats. And then let's also assume that Republicans pick up a few of the "lean Democrat" seats. Our sense is that in a true "wave" election the party with the lead, the enthusiasm and the turnout advantage will take 70-80% of the toss-up seats in addition to some of the seats that "lean" toward the other party. Using this formula, at this point in time it is our sense that the GOP will pick up a total of around 65 seats, giving the GOP control of the House (with 242 seats to the Democrats' 185).

The Senate is easier to visualize but, in some respects, more problematic to project. We continue to believe that it will come down to the West Coast, with the races in California (Boxer and Fiorina) and Washington (Murray and Rossi) holding the key to a Republican takeover. We've put Connecticut in the Democrat column and have put the following in the GOP column: KY, MO, NH, PA and WI. The other four true toss-up states are West Virginia, Colorado, Nevada and Illinois, although there are signs that all four are trending GOP at this time. Assuming Republicans win all four of these toss-up states, that leaves the aforementioned two West Coast races. The GOP would have to win one of those "away games" to get to 51 seats in the Senate.

Thanks again to John Zirinsky and Peter Ventimiglia for their insights and contributions. For real-time reactions to events and more thoughts on the public opinion environment, please follow us on Twitter @lcgpolling.