Any serious observer of the presidential election has to be scratching his/her head. In mid-September Obama was on track for reelection because Romney, at that point, had been deemed unacceptable by a vast segment of the electorate. Now, in mid-October, the President is dazed, staggered by a near knockout in the first debate and a subsequent Romney surge that seems to have the Governor on a winning trajectory. The problem is that neither scenario accounts for unplanned events. No one anticipated what happened in the first debate (a huge Romney performance and a terrible one from the president), but it did and it has changed things considerably. This election is roughly back to where it was in May of this year before Team Obama decimated Romney with negative ads. With 21 days to go, this race is essentially tied.

It is not an exaggeration to say that the debate two weeks ago shifted the course of this election dramatically. As we noted, the race began to show a natural tightening -- as you would expect -- about 30 days ago, but this accelerated after the October 3rd debate. That night, nearly 70 million viewers watched both candidates debate. The following week -- and its avalanche of negative reviews -- was devastating for the president. Even the positive jobs report did little to stop the bleeding. Below is our election trend line; it speaks for itself. There has been a significant change to the trend following the first presidential debate, and the VP debate did nothing to change its trajectory (it's entirely possible that tonight's debate, of course, could alter the current trend). 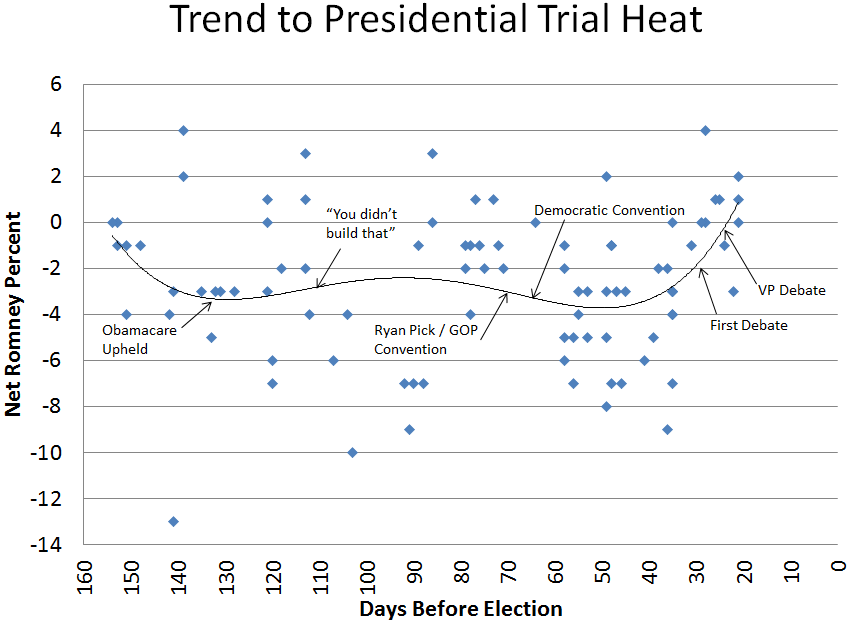 For the first time in four months Romney is even with -- or slightly ahead of -- the president. As you can see, the last 20 days have seen this election's most extreme vote change period. In addition to picking up undecided voters, some "lean Obama" voters switched to Romney.

While the race is roughly even, the president still retains an electoral vote edge... but that too is beginning to show signs of erosion. Three weeks ago we thought the race had narrowed to seven battleground states. The Romney surge, however, has put one of those seven (North Carolina) into the lean GOP column. It has also added two states that were previously lean Obama back into the toss-up column: New Hampshire and Wisconsin. In all, there are now eight toss-up states, all of which are within the margin of error. Below is our updated EV projection map: 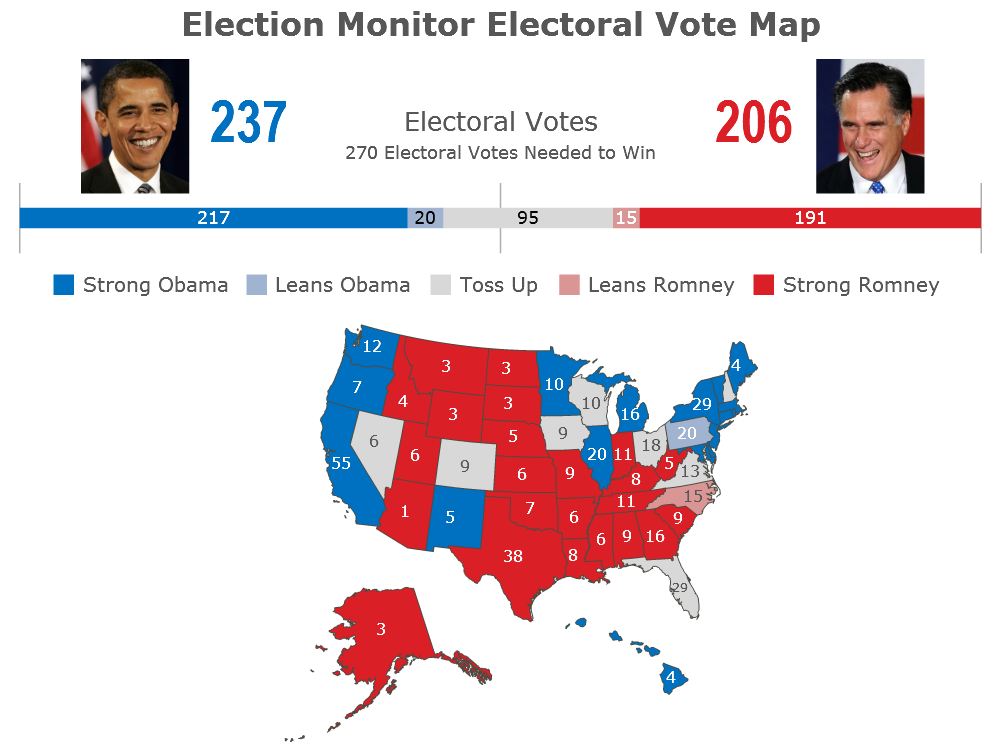 Let's take a quick look at what each of the candidates has going for him as we head into the campaign's final three weeks. For Romney:

Thanks again to Pete Ventimiglia, Chris Blunt, Kelsey Cohen and Allison Quigley for their insights and contributions to the Election Monitor. Follow us on Twitter: @Steve_Lombardo.