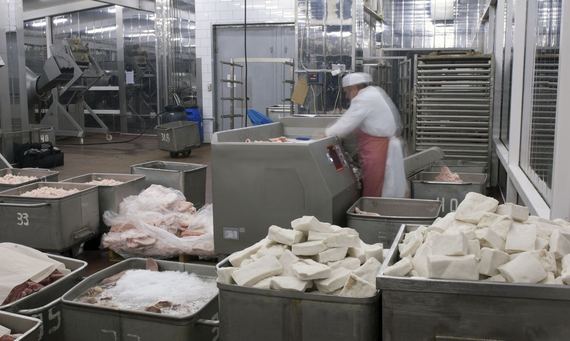 From farmworkers to restaurant servers, the food system employs millions of laborers around the world to pick, package, transport, deliver, and cook our food every day. Of the 3 billion workers in the world's labor force, about 40 percent are employed in agriculture alone, according to the International Labor Organization of the United Nations (ILO).

And workers in the middle of food supply chains -- truckers, ranchers, packers, and factory workers -- are often politically invisible, facing difficult working conditions and low wages across the globe. The value of wages for poultry workers in the United States has declined 40 percent since the 1980s, says Oxfam America. And according to the Fight for 15 campaign, two-thirds of fast food workers in the U.S. are supporting a family on average yearly wages of US$16,920.

Yet these workers' hands feed the entire world every single day. "I am proud to be one of the 20 million people who work in the food system in the U.S. because everyone enjoys the fruit of our labor, from the richest person to the poorest," says immigrant farmworker Gualberto. "It's because of our labor that we are all able to eat."

These laborers deserve a voice in the food system. From farm to fork, laborers deserve a living wage, safe working conditions, the right to organize, and access to benefits. Furthermore, they deserve recognition for the role they play in feeding families across the globe, and their stories should be highlighted.

Many organizations around the world are working to ensure that workers' voices are heard at every stage of food supply chains, and to protect these laborers' rights, safety, and livelihoods. Food Tank is highlighting the work of 21 notable organizations working for labor justice around the world:

1. The AFL-CIO is the largest federation of unions in the U.S., representing workers throughout the food system. "Jobs in many of these fields pay low wages and are among the most dangerous in the nation, with threats ranging from exposure to pesticides in fields where produce is harvested, to backbreaking labor in food processing plants," says Liz Shuler, Secretary-Treasurer for AFL-CIO.

2. The Coalition of Immokalee Workers (CIW) is a worker rights organization that campaigns for fair food and the rights of agriculture workers. CIW has established major agreements on labor standards and wages with McDonald's, Subway, Sodexo, and Whole Foods through its Fair Food Campaign, focused on tomato pickers in Florida.

3. Fairfood International works for living wages, occupational safety and health, and fair consumer prices across the globe. From Mexican tomatoes to pineapples in the Philippines, the organization ensures labor protections and fair pricing mechanisms to protect farmers and production workers from exploitation.

4. The Farm Labor Organizing Committee (FLOC) is a labor union that exists as part of the AFL-CIO. Founded in 1967, FLOC was initially organized by Baldemar Velasquez, a migrant worker who sought to improve the working conditions of others like him by creating a mobile organizing base that could move along with workers as the seasons changed. FLOC now has over 20,000 members and works in the U.S. and Mexico.

5. The Food Chain Workers Alliance, based in Los Angeles, California, works to build a food system that ensures workers a livable wage and healthy working conditions. The Alliance works with organizations across the U.S. to advocate for fair practices for workers across the entire food chain.

7. Jobs with Justice, based in Massachusetts, is an alliance of members advocating for collective bargaining rights, employment security, and shareholder accountability at the national and local levels. One current campaign, Change Walmart, Change the Economy, focuses on healthcare and labor benefits for employees of the nation's largest retailer.

8. La Via Campesina is an international movement building solidarity among smallholder peasant farmers and amplifying their voices in decisionmaking. On October 28, 2015, the organization held a seminar on peasant labor struggles in Bangalore, India.

9. Migrant Justice works to amplify the voice, capacity, and power of the farmworker community in the U.S. and engage community partners to organize for justice and human rights. Based in Vermont, the organization boasts

10. The Northwest Atlantic Marine Alliance (NAMA) is an organization led by fisherfolk who are working at the intersection of marine conservation and social, economic, and environmental justice. By amplifying the voices of fishers in the food system, NAMA intends to build a movement toward a just marine food system and community-based fisheries that are equitable for all and provide healthy coastal communities.

11. Oxfam International, a network of 17 organizations in 90 countries, works with communities on issue of poverty to provide emergency support and create high-profile projects such as their Behind the Brands Campaign. Oxfam America recently uncovered the high human cost of poultry production in the U.S. and is targeting these producers in a new campaign.

12. Real Food Challenge is a national campaign to shift purchasing at colleges and universities across the U.S. to ecological, fair, humane, and local food. Many campaigns of RFC have focused on labor, and RFC also supports students in organizing to support dining hall workers at institutions.

13. Restaurant Opportunities Center United is an advocacy organization focused on the restaurant workforce in the U.S. The group works for better wages and working conditions in an industry that is less than 1 percent unionized.

14. The Service Employees International Union (SEIU) is an organization of 2 million members working for a more just and humane society based on the dignity and worth of workers and the services they provide. Campaigns of SEIU include efforts to empower immigrant workers in the U.S., provide access to childcare and higher education, and provide a living wage to service workers.

15. The Solidarity Center, based in Washington, D.C., works with labor centers and human rights groups in more than 60 countries to provide training and union assistance, connect migrant workers, and boost advocacy to prevent child labor and human trafficking.

16. Teamsters is a North American union working for justice for workers throughout the food chain. In Tracy, California, Teamsters members are fighting poverty wages and severe violations of basic rights at Taylor Farms. And more than 11,000 Teamsters workers have united to defeat a mega-merger of U.S. Foods and Sysco, which would have jeopardized thousands of broadline food service and transportation jobs.

18. The United Farm Workers of America (UFW) is a farm workers' union that organizes major agricultural industries across the U.S. The UFW signs union contracts with some of the largest vegetable, dairy, and fruit producers in the country and works with state legislatures to enact laws protecting the rights of farmworkers. The organization advocates for its union members on issues related to immigration and food-borne illnesses, such as exposure to harmful agricultural chemicals.

19. The United Food and Commercial Workers (UCFW) represents workers in food processing, slaughter, and retail, aiming to voice their interests in federal policy and lobby for their rights.

20. Walk Free is an international movement to end modern slavery that leverages the power of partners around the world to win labor campaigns across industries. Campaign victories by Walk Free have included standards to protect children in the chocolate industry and workers in the palm oil industry in South Asia.

21. Warehouse Workers for Justice is an organization based in Chicago dedicated to living wage jobs and safe workplaces in the invisible middle of the food chain. Decent benefits and a right to unionize are often missing in warehouses that are used as transportation and distribution hubs for food, according to the organization.

A consortium of organizations will co-host an event on November 18, 2015, to launch a new campaign highlighting labor issues in the food system. The new campaign, "Voices of the Food Chain," a joint initiative of Real Food Media and Food Chain Workers Alliance, which builds partnerships and creates events to spark online and offline conversations about food. A family-style dinner at 6:00 PM PST will be followed by a panel discussion at 8:00 PM PST featuring food system leaders Anna Lappé, Eric Schlosser, and Joann Lo. The event will take place at the Brower Center in Berkeley, California.