Drinking from plastic bottles has become such an everyday way of life that many people don't even think about what they are made from, or where they really go after we're done with them.

Each American throws out an average of 21 lbs (9.5kg) of polyethylene terephthalate (PET) plastic bottles per year - 200 to 500 bottles per person.[1]

That's quite a bit of plastic waste, just to have a drink.

We are regularly reminded to recycle, and often hear about how much waste plastic is floating in the ocean. But that's all after these bottles have been created. What about the tsunami of environmental impact involved in manufacturing all this plastic before we even throw them away?

Einstein once said, "Intellectuals solve problems, geniuses prevent them." So let's trace the life of a disposable plastic bottle to see why prevention of disposable plastic (not using it in the first place) is the real key to fighting pollution.

#1 The key ingredient used to make plastic bottles is crude oil
Manufacturing a quart (liter) plastic bottle requires 2.6 oz. (100ml) of crude oil.[3] Plastic drink bottles are made from a polymer called PET, which stands for Polyethylene Terephthalate. The chemicals used to make PET, xylene and ethylene, are extracted from crude oil. Crude oil extraction is dangerous and polluting. The United States National Response Center reports there are about 27,000 oil and gas accidents every year.[2] America's crude oil is sourced mostly from the Gulf of Mexico, where the Deep Water Horizon spill occurred, from the Middle East, where the Iraq war occurred, and from the Canadian Tar Sands, where thousands of acres of forest are destroyed for the shale to be dug up. 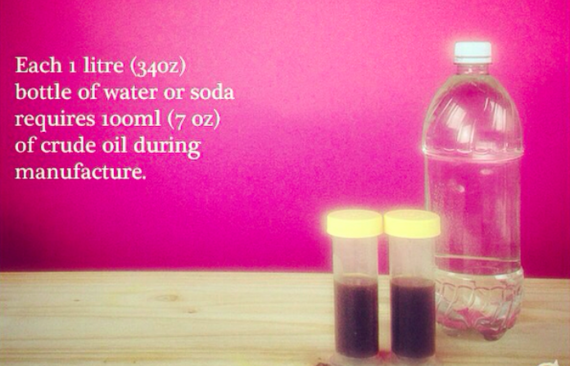 #2 Plastic also uses natural gas from fracking
The other main ingredient in PET manufacturing is natural gas. Making a quart bottle requires 1.5 cubic feet (42 litres) of natural gas. That's a sphere 53 inches (135 cm) wide, like in the image below.[3] Most of America's natural gas is extracted using the controversial process of fracking, which has resulted in thousands of water pollution claims across the USA. 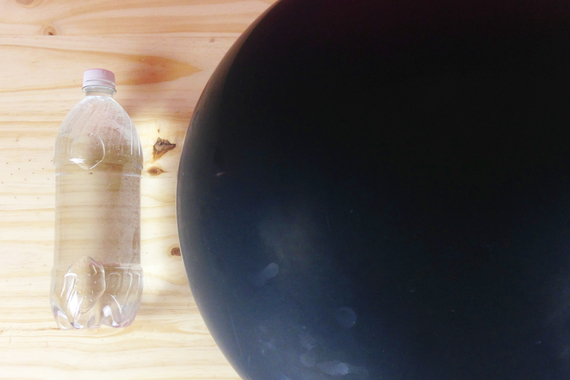 #3 Plastic manufacturing uses lots of coal
There is also the electricity required to make the polymers and shape the bottles. This electricity is largely generated from coal - which releases smog, air pollutants and heavy metals.[4] A one litre plastic bottle requires 2.9 oz. (83 gr.) of coal, as shown in the image below. 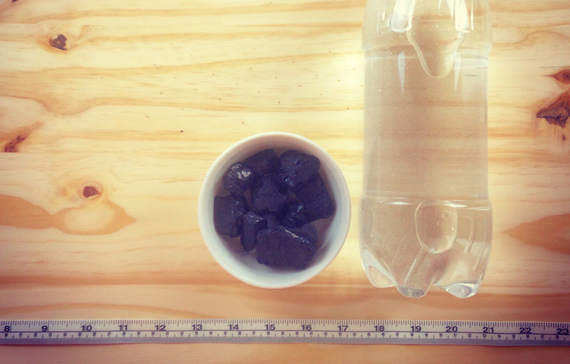 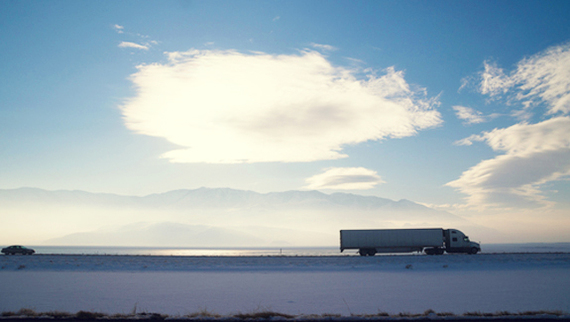 All this oil, coal and gas used to make one plastic bottle releases 3.4 cubic feet (96 liters) of carbon dioxide equivalents. That would fill a balloon 70 inches (178 cm) wide.

But, you might ask, can't this plastic be recycled? Unfortunately...

#5 Recycling can only decrease the environmental footprint of plastic a tiny amount
The key problem with recycling is that most (80 percent) of the energy and environmental impact occurs during the manufacturing of the bottle, even if this is done using recycled polymers. It takes so much energy to collect, shred and wash bottles, then remake them, that recycling can only remove about 10 percent of the carbon impact from a bottle's life.[4] 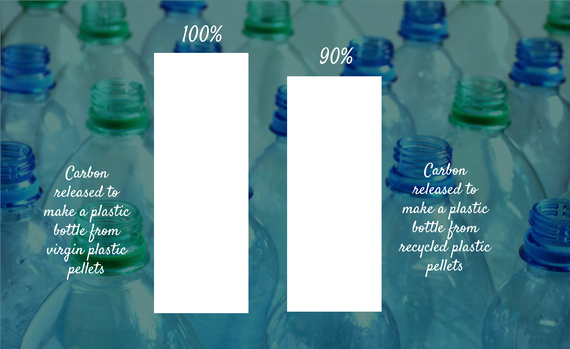 #6 Real recycling rates are low to non-existent
The reality is that recycling rates for plastic aren't great. Even in areas where voluntary recycling is relatively high, like California, it only reaches about 40 percent. (Many states don't offer recycling at all.) The national average is only 6 percent.[5] 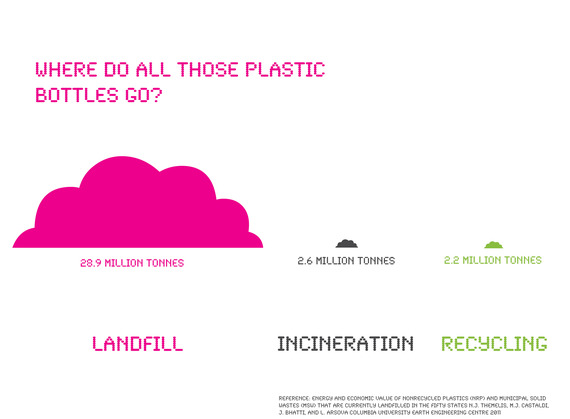 #8 Recycled plastic can't be made into clear bottles
Contamination of recycled PET plastic is unavoidable. Used bottles are inevitably attached to dust, glue, drink residue and other contaminants, which make the recycled plastic a cloudy grey color. 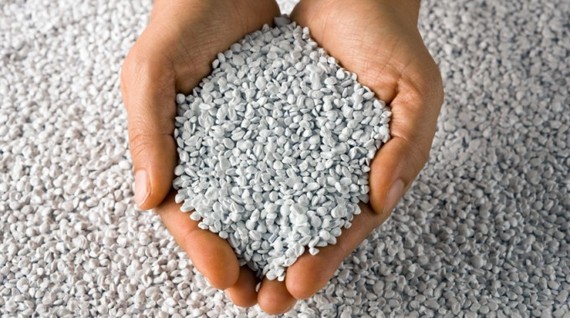 #9 Recycling trucks use diesel too!
The trucks that pick up bottles for recycling use energy. It takes about 5 gallons (20 liters) of diesel to collect and dispose of one ton of waste.[4] 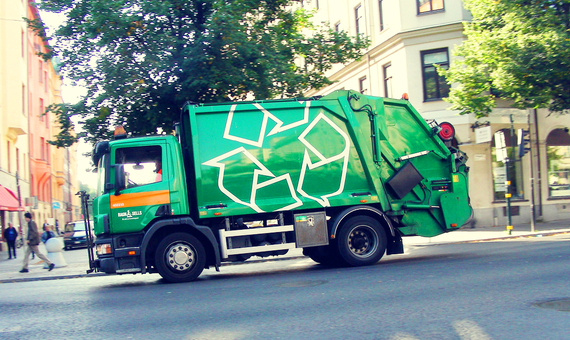 #10 Bottle caps make recycling even harder
Bottle caps are made from a different type of plastic: polypropylene. Polypropylene caps must be manually separated from the plastic bottles because they contaminate the PET polymers. 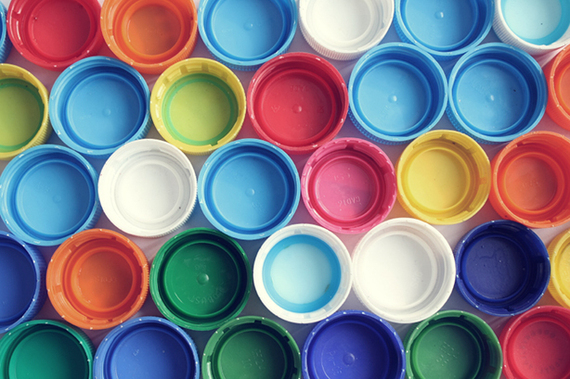 #11 Plastic is generally downcycled
Plastic can usually be recycled into another item only once. Contamination difficulties mean that plastic drink bottles are "downcycled" into lower-grade plastics, like plumbing pipes, plastic lumber, and polyester fabric. 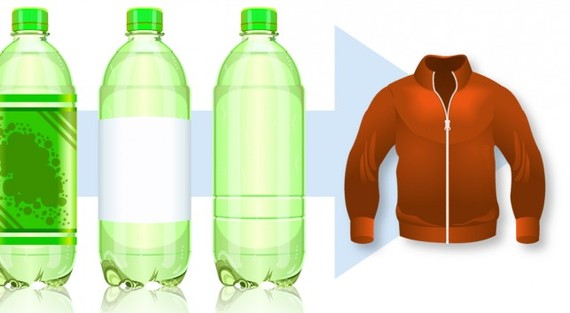 #12 Recycling plastic requires lots of water
Even though recycling is sold as a flagship green practice, recycling itself isn't an environmentally innocent process. The collected bottles need to be washed, which causes water pollution and requires even more electricity.[4] (The image below shows the washing of shredded recycled plastic particles.) 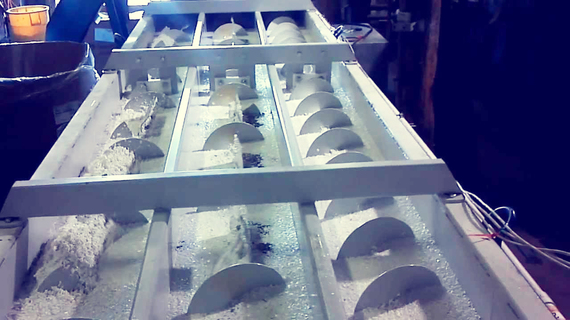 #13 Recycling often loses money
The market for recycled plastic polymers is simply not big enough to economically support plastic-recycling programs. Thus recycling programs can cost as much as five times what it costs to dump waste in a landfill. We pay for the all this garbage collection and recycling through our taxes. New York City, for example, spends 1.4 billion dollars a year on sanitation. 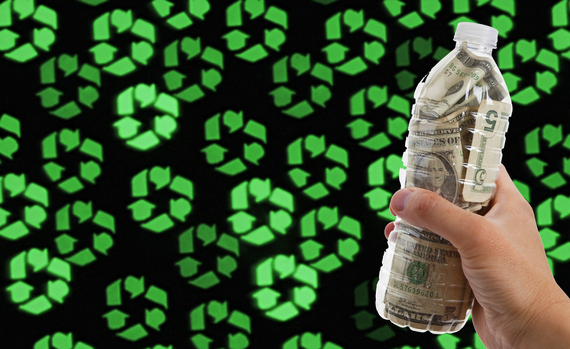 So - what happens to the rest of the plastic, the stuff that isn't recycled?

#14 Incineration just burns plastic, so it doesn't solve the problem
If plastic is incinerated, it may release highly toxic chemicals, called dioxins, and even more carbon dioxide than if it were landfilled. Incineration plants are also very expensive, and even they don't make waste completely disappear, because they leave a residue ash after the waste is burned. 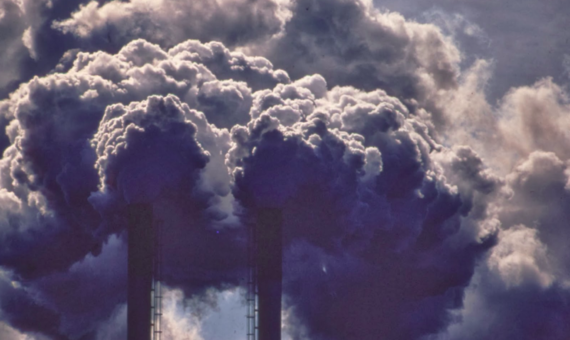 #15 Most plastic, even if thrown in a recycling bin, gets landfilled
Over 80 percent of America's plastic ends up in landfill.[5] Your plastic bottles will most likely be deposited in a landfill, where they will be encapsulated forever and will take roughly 450 years to break down. 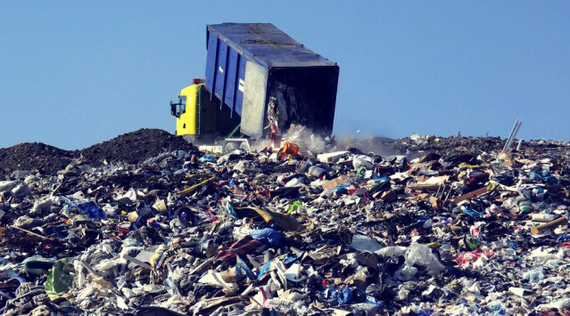 #16 Plastic waste in the ocean is eaten by birds and marine mammals
If your plastic bottle and its cap gets into the ocean, it will probably eventually make its way to a part of the ocean like Great Pacific Garbage Patch, where it may be eaten by a bird or sea turtle. Scientists have found six plastic particles for every single zooplankton organism (microscopic creatures that are the basis of the ocean's food chain) in this area.[7] 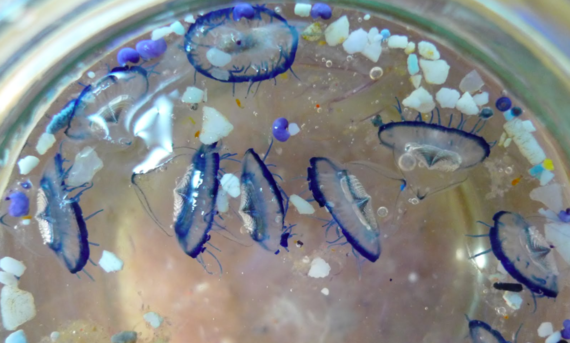 #17 Small plastic bits turn into microplastics and get absorbed by fish
Individual plastic molecules from broken-down plastic are absorbed by fish. (These are called "microplastics.") When this plastic breaks down, it releases toxic chemicals called phthalates into the fishes' tissues and thus ultimately into the seafood supply chain we eat.[8] 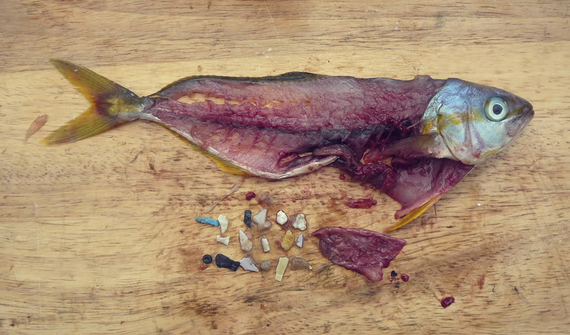 #18 Littering is expensive to manage
Litter costs the U.S. almost $11.5 billion annually and has been known to reduce property values.[6] 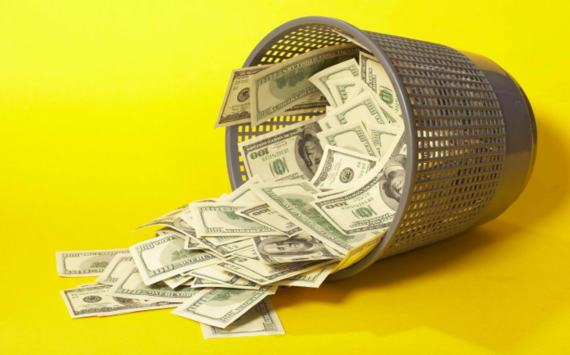 Then there's your health:

#19 PET plastic can release toxic chemicals called phthalates into your body
Plastic PET bottles can release chemicals called phthalates into your drink, which in turn can act as hormone disruptors in the human body. Phthalates are thought to contribute to breast cancer, obesity, lower intellectual development in children and smaller genitals in baby boys.[9] 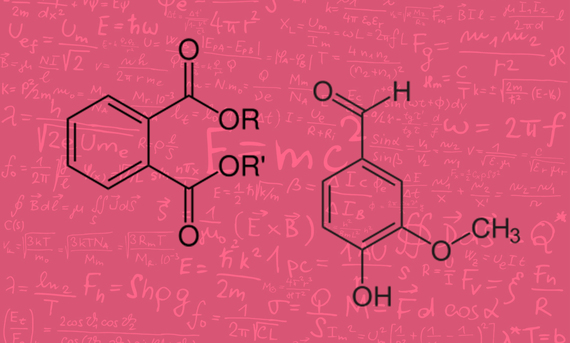 #20 Soda is a major contributing factor to obesity
Americans consume an average of 300 additional calories per day from soda. Replacing plastic bottled drinks with a reusable water bottle will free people up from consuming all those nutritionally empty soda calories.[10] 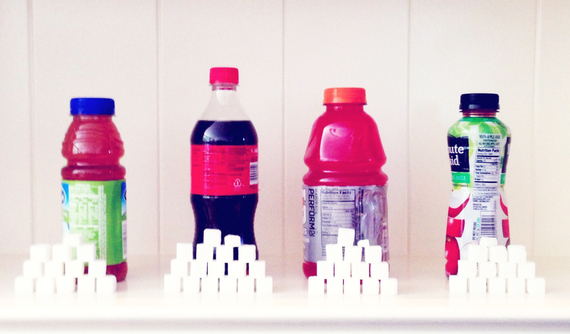 #21 Bottled water & drinks are expensive
If you spend $2.00 every day on bottled drinks, you will spend $730 per year on bottled drinks. If you invested this money from the time you were 20 years old until you were 60, at a 3 percent interest rate, you'd have an extra $54,000 in the bank!

One year of plastic bottle consumption adds up to . . .
Now, if we think of the resources required to manufacture the whole 21 pounds of PET plastic drink bottles we all use on average per year, it would amount to:

These fossil fuels release 926 cubic feet (26,208 liters) of carbon dioxide-equivalent emissions, making a balloon pollution 146 inches (3.7 meters) in diameter. You only need to imagine the scale of fossil fuels used for the nearly four BILLION pounds of plastic drink bottles we all use cumulatively as a nation every year.[3]

This doesn't mean that swapping plastic for glass or aluminium is the obvious solution. Glass manufacturing requires four times the aforementioned use of fossil fuels. Aluminium comes in next, requiring about 2.5 times as much.[3]

The real solution is avoiding disposable packaging altogether. Bottled drinks are low-hanging fruit for change because they are so easy to replace with reusable drink bottles.

We can do a great deal to cut plastic pollution as individuals. Many people are adopting a zero waste lifestyle, which involves quitting of disposable plastic products as much as possible.

You can start helping prevent plastic pollution by falling in love with your reusable water bottle and taking it with you everywhere you go. If you have it with you, you won't even be tempted to purchase plastic bottled drinks. 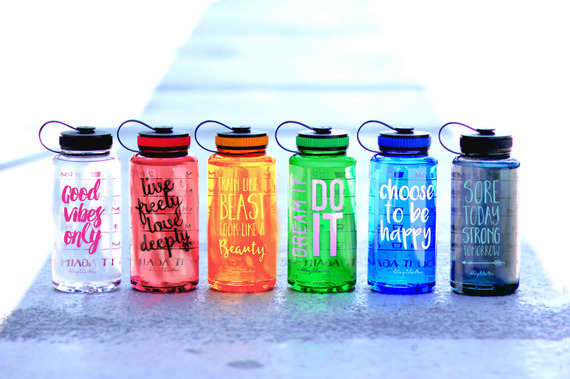 A life without disposable plastic bottles is one important step to creating a more beautiful, healthier world we can all be proud of. One that you helped create with the simple zero waste action of making your reusable water bottle your best friend.

Did you know that you can live your whole life without making any trash whatsoever? Download the manual 'Detrash Your Life in 90 Days': Your Complete Guide to the Art of Zero Waste Living on Kindle or as a PDF and subscribe to the Detrashed Youtube Channel for more tips on how to detrash your life. Follow my work at Hello World Labs.