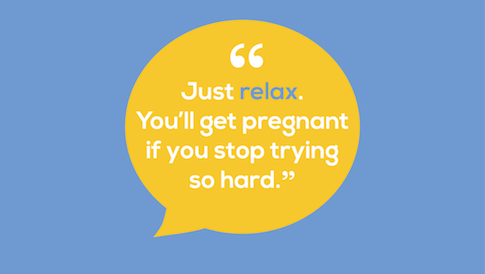 We're just going to state the obvious: Infertility is a very sensitive topic. There are so many people struggling to get pregnant for a variety of reasons and sometimes what they're hearing from those around them doesn't help ease their troubles. Often, comments that might seem like simple suggestions are actually pretty hurtful to those having difficulty conceiving.

"The two years we struggled with infertility were the absolute worst years of our lives," says Further Food contributor Debra Lau Whelan. "To be fair, most people have no idea if a couple is having problems getting pregnant. But I couldn't believe the insensitive things I heard - even from doctors and nurses!"

Further Food contributor Natalia Griffiths, whose infertility troubles included an underactive thyroid and PCOS, was also faced with comments that simply shocked her. "Saying these things to someone trying to get pregnant just isn't helpful at all," she says.

So whether you're aware of someone's efforts to conceive or not, avoid the following statements:

1. Just relax. You'll get pregnant if you stop trying so hard. Probably one of the most frustrating to hear, telling a couple to relax about conceiving is a big no-no. You don't know if her body isn't ovulating or what else might be preventing them from having success.

2. You guys would make the most beautiful babies! Sounds like a compliment, but to a couple having trouble getting pregnant, it's just another reminder that it hasn't happened yet.

3. Did you have your husband checked out? Maybe he's shooting blanks. It may sound like just a suggestion to you, but a comment like that can be quite offensive. Trust that the couple is taking every approach they can to figure out the issue.

4. But you're so young. Age isn't everything. You don't know if she has a condition that makes conceiving much more difficult, no matter how old she is.

5. It's in God's hands. Bringing religious beliefs into the conversation is a risky move. You don't know who believes in what.

6. You should adopt. Do you know how many kids out there need good homes? While, yes, there are a lot of children who need families, you don't know if the couple has already looked into the very detailed process of adoption. Or if, perhaps, they feel strongly about having their own biological children and haven't given up on that dream just yet.

7. Don't worry. Today's technology is amazing. I read somewhere that a woman gave birth in her 60s! Yes, people really say things like this! Suggesting that technology will save the day in the end just minimizes the couple's whole journey.

If you know someone's been struggling with conceiving, telling them you're expecting can be like a knife to the heart. Of course, if it's a close friend or family member, you'll want to share your news, but be sensitive.

9. Your eggs are old. Whether you're a fertility doctor or just a friend, this is such an insult that places blame on the woman and essentially scolds her for trying to conceive at a certain age.

10. Kids are so much work. You're lucky you don't have any! Sure, having children is work - but it's work that person desperately wants to do. She doesn't feel lucky in any way, but rather quite unlucky that it hasn't happened yet.

11. You should be happy. You already have one! Secondary infertility is just as painful. Just because a couple was able to have a child doesn't mean not being able to conceive again is any less difficult.

12. Maybe it's for the best. A couple desperately wanting a child (or an additional child) will never think their unsuccessful attempts were "for the best."

13. Are you pregnant yet? Talk about pressure. Even if the person has shared that they're trying to get pregnant, it's best not to ask if it's happened yet.

14. That's what happens when you wait so long to have another one. This is just simply untrue, so bursting out with this blanket statement doesn't help anybody.

15. At least you don't have cancer. Just enjoy what you have! You'll never know exactly how that person feels struggling with infertility. Comparing it to a disease that you think is worse is basically telling them their feelings are invalid.

16. Don't rush things. Just think how lucky you guys are being able to go on nice vacations. Anyone trying to have a baby isn't thinking about lying on a beach or sightseeing abroad.

17. So when are you going to do IVF? Not only is in vitro fertilization costly, but that's such a personal question, and if the person hasn't shared any information about it, maybe they don't want to discuss it.

18. You should see a different doctor. It's pretty likely they've already done that. People struggling with infertility get different opinions, try different approaches and often have many, many consultations. They don't need you to suggest the obvious.

19. Are you taking good care of yourself? No one needs you to question their health or habits. It's their doctor's place to discuss factors like diet, exercise, stress and more.

20. Maybe you've been too focused on your career. Just because someone chose to put a lot of energy into work doesn't mean that's the cause of their fertility troubles. Better not to shame their choices when you can't clearly link the two.

21. Get a dog! Sure, pets can certainly be considered family, but to those hoping to have a baby, it doesn't compare. So just don't say it.

So what should you say, if anything at all?

Further Food expert Dr. Nicole Avena, who struggled to get pregnant herself, says infertility is something that many couples deal with, often silently. "I had a few miscarriages, plus I have PCOS, and we have genetic abnormalities that made it tough for me to get pregnant," she shares. "Now, we have two beautiful daughters, but for many years it wasn't easy. After my first miscarriage, I learned to keep my mouth shut because it is hard to tell people you aren't pregnant anymore."

Her best advice is to acknowledge their pain, not dismiss it.

She gives three tips on what to say instead:

Tell them you're sorry they're struggling with this and that you're there to listen if they want to talk or vent about it.
It can be uncomfortable to hear about a friend's pain, and often we try to make them feel better by saying things that they can take the wrong way ("I'm sure you will get pregnant soon").

Don't act like you know what they are going through, because you don't.
Everyone's infertility is different, and even if you have struggled to get pregnant yourself, it is not the same for everyone.

Refrain from asking anyone if they are going to have kids (or more kids).
Families come in all shapes and sizes. Some people don't have any children by choice, or just one child by choice.

The bottom line: You never know when people are struggling with infertility, so be mindful of that and choose your words carefully.

Want more? You might also like:
Can't Get Pregnant? Why Gluten Might Be The Culprit
Recipe: Gluten-Free Saffron Risotto
Overweight and Trying for a Healthy Pregnancy? 5 Essential Diet Tips
If You're Having Fertility Troubles, Have You Looked at Your B12 Intake?