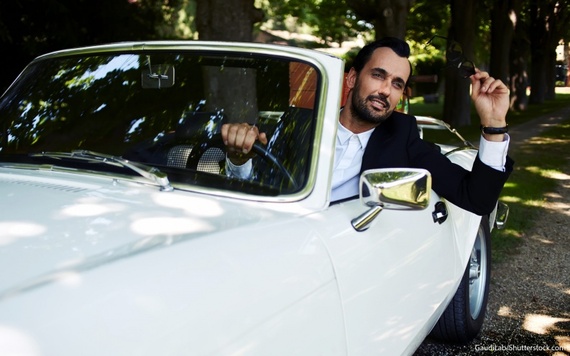 Oh, if only you could get rich quick. When you're rich, you have more money than you know what to do with. But unfortunately, sometimes having too much money can lead to waste.

Of course, not every rich person wastes money; there are many who know how to spend responsibly, like the notoriously frugal billionaire, Warren Buffett. Still, there are some billionaires and millionaires -- and people who aren't either of the two -- who spend their money on things they don't really need.

Click through to see 21 examples of how some rich people waste their money.

Bottle service is a big part of the nightclub experience. It's also a must if you want VIP hospitality -- and when you're rich, that's exactly what you crave. The service, however, comes with a steep price.

According to LavishVegas.com, Las Vegas clubs tend to charge between $350 and $575 for each bottle, plus tax, waitress gratuity, table tips and other miscellaneous fees. And, most clubs have a two-bottle minimum with a one-bottle-per-three-person rule, which means you're bill can be as high as $1,150 if you're with a group of six.

2. Getting a Superyacht as a Status Symbol

For some, a superyacht is not a recreational boat; it's a status ship that they want all their friends to envy.

Yachts might be a dime a dozen for the super-rich. But just because you have the cash to purchase one, that doesn't mean you should. According to a report by Towergate Insurance, the cost to buy and maintain a 100-meter-long superyacht that has a top speed of 25 knots and 50 crew members comes out to $275 million on average. Is it really worth it?

Buying property is a good investment -- but only if you make use of it or turn a profit. But, some rich people are guilty of purchasing properties that they never really use. The same goes with renting.

In a 2013 article, one Vulture writer detailed his renting experience with Guns N' Roses frontman, Axl Rose. Rose reportedly rented the writer's New York apartment for two years but never moved in. "As far as I can tell, Axl never set in my place after his initial viewing," reports Vulture.

4. Buying Their Own Islands

Celebrities and multimillionaires might buy private islands to get away from the paparazzi or just to do whatever they darn well please. It's a lot of cash, however, for a slice of paradise.

Actor Eddie Murphy, for example, purchased Rooster Cay in the Bahamas for $15 million in 2007, reports Private Islands Magazine. Also according to the magazine, actor Mel Gibson bought Mago Island in Fiji for $9 million in 2005.

5. Investing in the Wrong Startups

Investing in startups might be easier and cheaper than investing in already-established companies. However, the risks can obviously be quite high -- which is why proper research should always be done first to see whether that startup is a smart idea.

Estate planning attorney, John McManus of McManus & Associates, said there's no reason to buy outrageously expensive, exotic vehicles for teenagers and young adults -- especially those who have a record of making bad judgment calls. "A 21-year-old is still developing the frontal lobe of the brain where all the judgment and discerning ability lies," he said.

Although certain luxury cars might become classics, some might not be worth the hefty price tag in the end thanks to depreciation. "The disproportionate majority of exotic cars more typically depreciate instantly when they roll off the lot," said McManus. "Even if they don't, the slightest accident can impact value permanently, sometimes to pennies on the dollar."

All parents want the very best for their children, and rich people have the money to make it happen. And those who want their kids to launch a career in sports are willing to pay the big bucks to make their dreams a reality.

"Club team dues alone can be $3,000 to $5,000 a year, plus tournaments, private training and out-of-state travel, including flights across the country," said McManus. But spending thousands of dollars on club teams and sports for a young child can be a total waste of money if the child doesn't even want to be an athlete.

8. Building Mega-Mansions -- and Never Living in Them

CNBC reported last year that a mega-mansion worth $195 million was built overlooking Beverly Hills years ago. Although the mansion boasts 12 bedrooms, 22 bathrooms and a 15,000-square-foot entertainment complex as well as a vineyard, the owner has not lived in it for at least eight years.

Whether the owner forgot or moved on to the next big thing, this is clearly a waste of money that only the rich can afford to do.

Related: What a Million-Dollar Home Looks Like Around the World

9. Using Toothpicks Made Out of Gold

Who doesn't love gold? Whether it's gold jewelry or even dishware, the wealthy sure have plenty of it. And if they're ultra-rich, they might even use the precious metal to pick food out of their teeth. According to Business Insider, some rich people like to spend their money on $600 toothpicks, believe it or not.

A standard hospital room doesn't cut it for the rich. Instead, some pay for a spa-like or four-star hotel experience with fine linens, tea and the like. Some hospitals even serve fancy cuisine, such as lobster ravioli or lamb. It sounds nice, but how much does this cost? In New York City, many hospitals offer rooms that cost as much as $4,000 a night, reports the New York Post.

In addition to spending a fortune on hospital rooms, some members of the wealthy class will drop a few grand for medical services outside of what their insurance covers.

Bloomberg Business reports that concierge medicine can include a 24-hour on-call doctor and even an emergency room designed specifically for one's home. It might cost as much as $30,000 for access to this kind of care and as much as $1 million for that emergency room.

12. Buying Their Own Doomsday Luxury Condos

Even the rich fear the apocalypse. Luckily for them, they can pay for a pricey luxury survival condo in Kansas complete with a redundant water supply and air filtration, a medical first aid center, a communication center, a general store, a bar and lounge, an indoor pool and spa, and more. Costing $1.5 million to $3 million, this is one expense that might not be worth it, considering the likelihood of an apocalypse occurring is pretty slim -- at least, in this lifetime.

13. Buying Art Just Because They Can

The rich has always had a fondness for art, but their liking of art and antiques has driven them to record prices. At two New York art sales in 2013, more than $1 billion was spent on paintings and sculptures, making it the highest auction total in art market history at the time, reports the Guardian.

But unless each buyer has a real passion for art and doesn't just buy pieces to appear "worldly" or "sophisticated," that's $1 billion down the drain.

What do you buy a spouse that has everything? A helicopter and flying lessons if you're Angelina Jolie. In 2012, Fox News reported the actress bought her then-fiancé, Brad Pitt, a $1.6 million helicopter plus flying lessons.

Private helicopters and jets are nice. But why pay millions when you can pay less for a first-class ticket on a nice commercial airline?

How do custom armchairs with heating and massaging options sound for movie viewing? Those are some of the luxuries that come with private home theaters for the rich.

Prices to build these unnecessary luxuries can easily cost $100,000 or more. And when you're already paying this much, what's another several hundred dollars to get first dibs on the latest movies hitting theaters?

What's the point of buying a nice, expensive, super-fast car if you can't drive it on the road? That's the mindset of some rich car enthusiasts who need a racetrack to drive their bad boys at top speed -- and they're willing to drop some heavy cash to do so.

For example, there's a 4-and-a-half-mile private racetrack in California that gives these owners a chance to experience their rides to the fullest. But according to CNBC, membership can cost $85,000 and up.

If you're tired of driving sports cars on racetracks, how about a fully functional aquatic sports cars that can be driven under water? If you're rich, you can probably afford to buy a submarine car -- like James Bond's Lotus in "The Spy Who Loved Me -- for $2 million on Hammacher.com. It's a waste of money for some but simply the price of fun for others.

Celebrities and the extremely wealthy are used to getting what they want -- and food is no exception. They're willing to dish out tons of cash to have personalized meals.

Personal chefs typically charge $50 to $75 an hour (plus groceries), reports the New York Post, which means the total cost could come out to a few hundred dollars per meal. That doesn't sound so appetizing, does it?

19. Buying Mansions for Their Horses

Stables are for the poor man's horse; horses of the ultra-rich have mega-mansions to call their own. According to CNBC, these homes can costs tens of millions of dollars in one exclusive neighborhood for super-rich Floridians. Wasteful spending? Perhaps, but the rich are simply used to the very best.

To all of the wannabe Carrie Bradshaws out there, close your eyes and imagine this: You walk into your closet and see hundreds of colorful shoes adorning your walls and shelves housing your designer duds, purses and jewelry.

Now open your eyes, and try not to be too disappointed -- only the rich can afford this kind of closet. But don't feel too bad; closets of the rich can be enormous but, generally speaking, they're a waste of money. It's not unheard of for the rich and famous to spend a staggering $100,000 or more for a closet that's so big you can practically host a cocktail party.

21. Exploring the World Via Private Jet

Forget about cruises or backpacking through Europe; the rich have taken adventurous excursions to a whole new level. They don't only use private jets for quick business trips or to get out of town for the weekend -- they're flying private as they travel the world and see multiple countries. Some companies are offering private jet journeys where people can take trips lasting 20-plus days and costing more than $90,000 per person.

Keep Reading: 7 Ways to Travel Like a Millionaire -- on a Budget

This article, 21 Ways the Rich Waste Their Money, originally appeared on GOBankingRates.com.