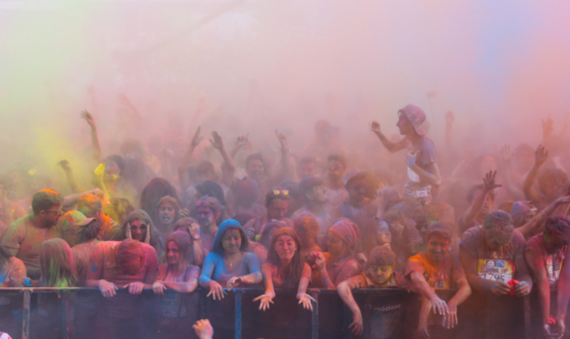 There's a joke/meme doing the rounds of professional audio and live music event circles. Picture the scene: a heaving arena, packed with thousands of expectant fans. A huge PA flanks a fully equipped stage, its lighting rig already spangling the crowd with state of the art moving head fixture beams.

Onto the stage bounds the evening's entertainment, which everyone has come to see. But it's not a band in absurdly tight trousers, brandishing top of the range and lovingly crafted guitars and drum kit. No, it's a skinny young white bloke in shades and a rubbish hairdo, brandishing ... a tiny USB stick!

OK, so the joke's a bit laboured, but the point remains - what does today's DJ culture tell us about the intersection of music, technology and fandom? Another way of putting the same question - how is today's popular music consumed by its fans?

It's a well-worn question, but worth another look in the context of a pop music economy increasingly governed by DIY production methods and direct distribution by musicians and music producers via streaming services and downloads. These have moved so far into the mainstream that the huge conventional success of an artist like Adele, selling millions of actual CDs from music stores around the world, is now almost an anomaly.

Still one of the most influential ways of thinking about the implications of a fluid and well-nigh virtual cycle of production and consumption of music, and the cultural significance of the art form itself, is Jacques Attali's book Noise: The Political Economy of Music. It was first published in French in 1977 and translated by Brian Massumi in 1985.

A political economist, philosopher and confirmed neo-liberal capitalist, Attali was prominent in French President Francois Mitterrand's administration. He theorised that social control and institutionalisation of music could be used to mark stages in the mutations of capitalism itself, from feudal social structures through to "post-capitalist" ones.

Attali's convincing argument sees music as a fundamentally ritualistic and powerful social mechanism. It undergoes ordering and co-optation to the socioeconomic status quo.

Thus, for example, he argues that in the era of industrial mass production and the more or less passive consumerist consumption which is its corollary, music takes a commodifiable form. This form reifies its ability to connect human beings to each other and to an idea of the divine.

This reification we know as "vinyl records" and "compact discs", which are now themselves superseded by music as pure wavelength in an accessible digital file format.

There is the interesting sidelight of the return of vinyl as a fetish of sorts - an expensive and obsessive hobby for audiophiles and fanatics. But Attali's book is also an object in history. Its analysis, trenchant as it might have been, has been overtaken by the pace of technological development.

Which brings us back to the skinny white DJ. Of course there are many instances of black DJs and producers of all stripes. Many are hugely influential in the contemporary history of pop, from Lee Perry to Carl Craig. But we're talking about a representative and conservative strand of "whiteness" in pop production and consumption here.

In our supposedly post-capitalist moment, music has become emblematically programmable. The DJ with his console full of samples and USB full of mixes and beats has become a kind of Ur-musician. The latest decks have morphed into "controllers", every bit as complex and sophisticated as the ones that control the networks of large buildings and IT systems.

They produce visual waveforms so that the DJ can match beats on screen. They trigger loops, samples, beats - you name it.

When the DJ was a revolutionary

They even feature disc-like constructions on the console, which serve the purpose of manipulating the building blocks of songs. But they also act as a comforting visual reminder of the days when DJs actually physically manipulated discs to produce new and often revolutionary music.

The fans, as in the meme, do not mind getting their joy from DJs' minute memory sticks. In 2014 alone technology-driven electronic dance music generated a combined US$268 million, up 11% from the previous year.

Every technological advance can be put to many uses. Creativity, authenticity and originality in our saturated and post-commodity culture might be measured by the ways in which oppositional and independent creators manipulate such technology to unintended ends.

Since music is at the vanguard of a new way of understanding the production and consumption of cultural objects, and consequently the way in which we understand the profitability of cultural forms, it's at the extreme coalface of DJ technology that the struggle is happening.