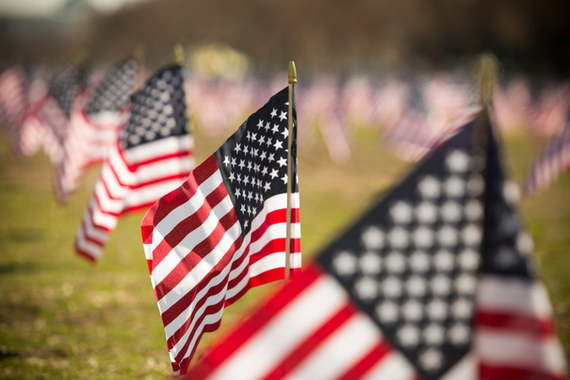 An estimated 22 veterans die by suicide each day. But you will see no headlines on their passing.

For many of our brave servicemen and women, transitioning home is challenging. Imagine the strain of leaving family and friends for months on end in an unfamiliar country, enduring battle and seeing your friends fall to the enemy. Then, you come home to banners, beers and thank yous -- but the nation is focused largely on other issues. While you may be needing help, not knowing where to turn, America is at the mall. You've lost a sense of serving a greater mission, and working alongside men and women you would trust your life with.

In March, IAVA planted almost 2,000 flags on the National Mall. Tourists and strangers walked by and asked: Is that how many service members who have died in Afghanistan?

No, we replied. It represented the veterans who had died by suicide since January 1, 2014. A little over three months.

Robin Williams' suicide was felt deeply around the world -- and in the veteran community. And it's pretty easy to see why. He took dozens of trips overseas to entertain troops with the USO. In doing so, he made us laugh and made us forget that, even if just for a few moments, we were away from our loved ones and in a war zone a world away. And it's not often a comedian gets official statements on their passing from either the Commander-in-Chief or the Secretary of Defense, but Robin got both.

He clearly made his mark on us.

But during this time, we now know that he was fighting his own demons. And he may or may not have known that so many of his audience members on those long trips to far-off combat zones were fighting them too. In IAVA's 2014 Member Survey, the largest survey of Iraq and Afghanistan veterans in the country, the numbers were startling: 47 percent knew a vet who had died by suicide and 31 percent had considered suicide themselves.

And once we saw these numbers, we knew we had to do something, so we sprung into action. It started in March during Storm the Hill, our annual advocacy and leadership development program in Washington, where we kicked off IAVA's Campaign to Combat Suicide. The campaign includes specific actions for Congress, the White House, and most importantly, the American people.

And we are getting some traction in Washington. The Clay Hunt SAV Act (named for Clay Hunt, a former Marine, IAVA member and personal friend who we lost to suicide in 2011 after a difficult transition that included PTSD, survivor's guilt, divorce, late GI Bill payments and being stuck in the broken VA disability claims process) is bipartisan and gathering support on the hill. And President Obama just issued executive action on mental health that will help meet the needs of troops and vets. But none of this is far-reaching enough, or moving fast enough, to properly address the issue.

So that's why it's good to see that where we're getting our best response is from the people. A few weeks ago, we launched the Convoy to Combat Suicide, a nationwide tour that is rolling through over 40 cities and raising awareness of these issues brave men and women are facing every day. And we've picked up some serious firepower to help us in the fight. We've partnered with Linkin Park, the Rockstar Mayhem Energy Drink Festival, Major League Baseball, MillerCoors and up-and-coming NASCAR driver Cale Conley on the Convoy. And with them as force-multipliers, we're reaching more Americans with this information -- and how they can get involved -- than ever before. Check out the Convoy hub today to see if we're coming to your area.

And if calling your representatives to get him or her to pass the Clay Hunt SAV Act isn't exactly your style, there is something easy that every single person can do.

For years, IAVA has partnered with the VA's Veteran Crisis Line. So all you need to do is just remember this number: 800-273-8255 and press 1. That is the hotline for any vet who may be having suicidal thoughts -- or if you know of a veteran in crisis. So write it down. Or put in your phone. Or take a picture of it. And give it out liberally. Share it on Facebook and Twitter. You never know when it will come in handy.

It could save a life. Because one person like Clay or Robin lost is one too many. And 22 a day is 22 too many. And 8,030 -- which is how many brave men and women we will have lost by December 31 -- is unconscionable.

We can lower this number. But we can't do it alone. We've got to do it together. This is a matter of life and death.

But we have to act now.

Learn more and get involved at IAVA.org.