Have you ever seen weed... on a police cruiser?

The Unified Police Department in Salt Lake County, Utah, is bragging about its marijuana haul on social media, and for good reason: Officers confiscated 22 pounds of weed during a routine stop this week. 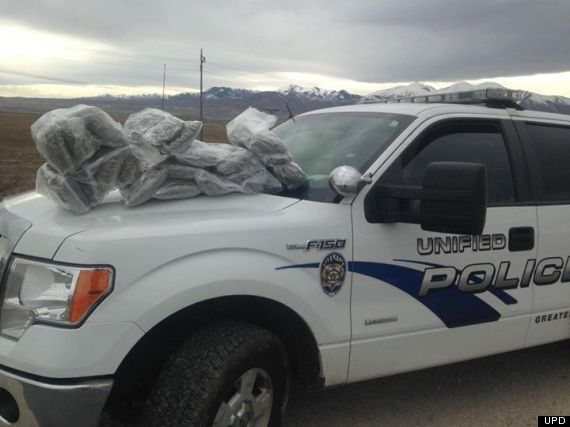 The result wasn't a mugshot -- or even a suspect's name, for that matter -- but rather a beautiful photo of marijuana atop a UPD Ford F-150, graced by a backdrop of snowy mountains. The shot has a certain je ne sais pot.

According to NORML, possession of 22 pounds of marijuana is a felony and could land the suspect up to five years in prison and a fine of $5,000. If the suspect was selling the product, that's another five years.

Here's the UPD's release in its entirety:

A UPD officer stopped to help a motorist on the side of the road near I-80 and 7200 W. While the officer was speaking with the driver, and with the help of a Utah Highway Patrol K-9, twenty two pounds of Marijuana were discovered and taken off the street. The driver was arrested and booked into the Salt Lake County Jail.