Ever since Sriracha exploded a few years ago, the amount of spicy food on any given restaurant menu has reached new heights. Changing consumer tastes and changing demographics have called for more fiery foods and restaurants are spicing up their offerings. Think about it -- when was the last time you were in a restaurant that didn't have hot sauce on hand?

From arrabbiata pasta at your favorite Italian spot to sushi drizzled in spicy sauce to Mexican drinks with a jalapeño kick, spicy lovers can find menu options that are packing the heat at restaurants of every cuisine. Shudder at the thought of eating hot foods? Try a couple bites of one of these dishes next time you're out -- increased tolerance develops with repeated exposure! Here's 23 dishes that'll spice up your next night out: 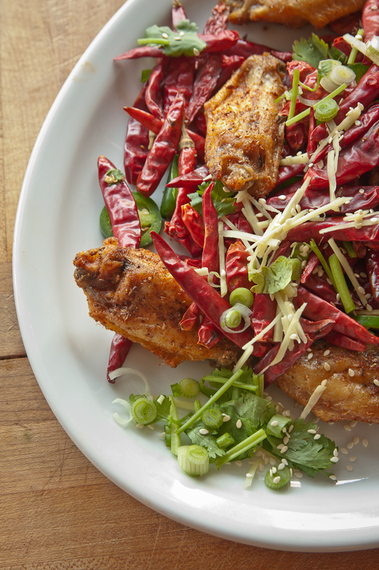 Sichuan and Northern Chinese cuisines are known to be fiery and mouth-numbing and many of the delicious dishes at Danny Bowien's Mission Chinese Food support that reputation. Among the hottest dishes on the menu are the chicken wings -- prepared as Chongqing-style dry fried chicken -- which are tossed with a Sichuan peppercorn-based spice mixture and buried in an abundance of red peppers. 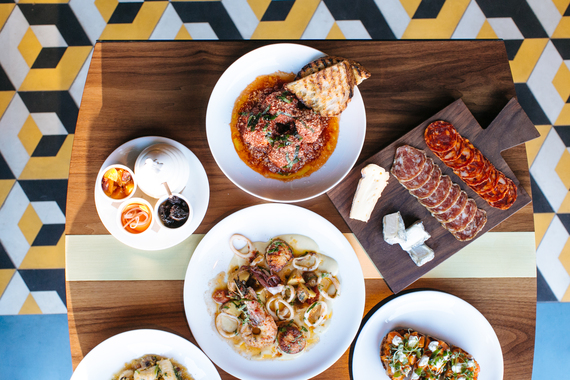 A staple on great Italian menus, a charcuterie plate offers something for individuals of all spice tolerant levels, revealing smoky, spicy and salty flavors depending on the cured meat selection. ROOT's platter includes a mild Pomegranate Lonza, as well as a Napolitana salumi (cold cut) that blends hot pepper and paprika for a spicy touch. 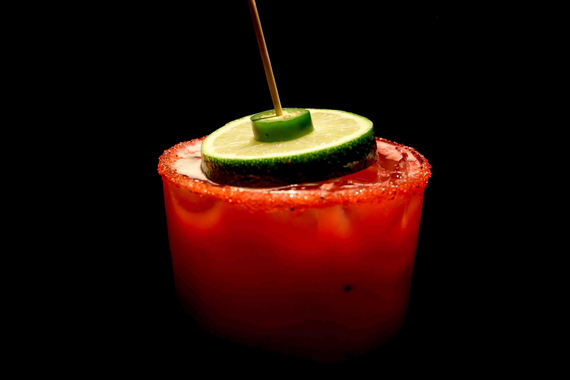 As is common at Mexican restaurants, Lolita Cocina and Tequila Bar lets you drink, not just eat, your spice cravings. One cocktail that packs the heat is its diablo margarita made with Lunazul Reposado (tequila aged in wooden barrels between two and twelve months), serrano chiles (a spicier, smaller version of the jalapeño pepper), blood oranges, pineapple and strawberry. 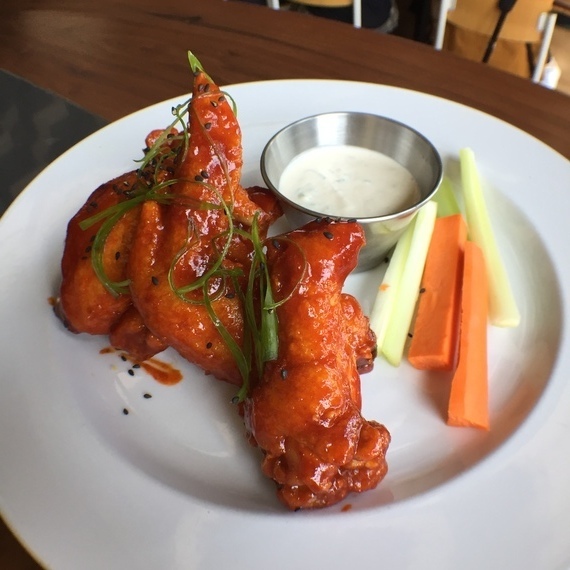 An Asian twist on classic pub grub, the wings at Status Kuo are doused in gochujang, a piquant Korean fermented chile paste, and served with a side of tofu "blue cheese." Made from chili peppers, sticky rice, fermented soybeans and salt, gochujang isn't a finishing sauce like sriracha or tabasco -- it's too aggressive -- and is generally cut with something like soy sauce, sesame oil or sugar during cooking. 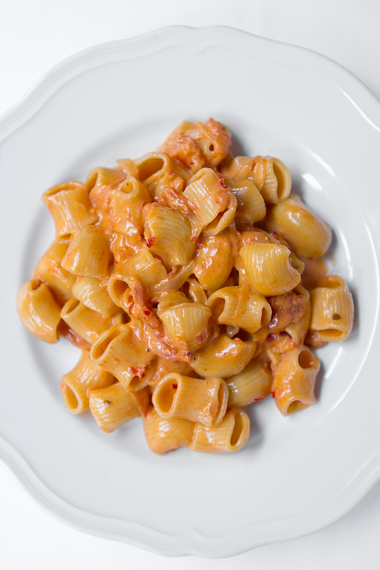 One of the most Instagrammed restaurants dishes, the spicy vodka rigatoni at Carbone is as delicious as it looks, prepared with onion soubise (béchamel sauce with added onion purée), classic cream, pecorino, tomatoes and Calabrian chiles. A popular ingredient in Italian cuisine, Calabrian chili peppers are spicy and aromatic, a great match for pizza, pasta, stews and soups. 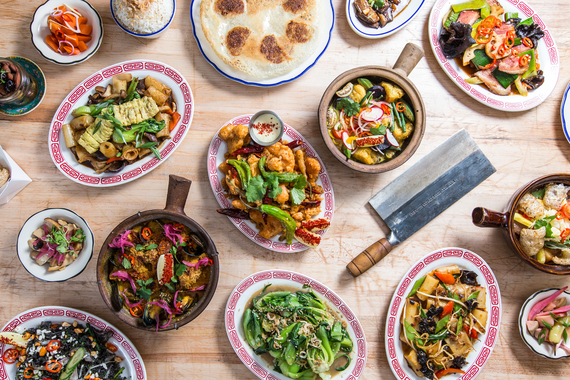 Macanese hot spot Fat Rice features a number of dishes denoted with the spicy symbol, including the piri piri chicken, a char grilled half bird with spicy tomato sauce. Influenced by Portuguese flavors, piri piri sauce is made from crushed chilies, lemon juice, oil and red peppers, among other varying ingredients. 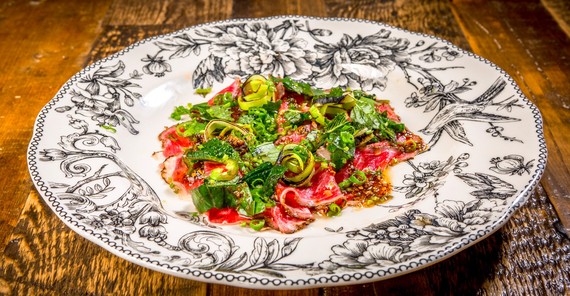 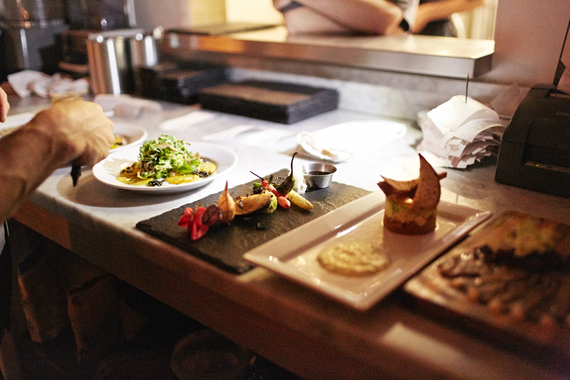 
A number of dishes at Vedge pack the heat, including the spicy ssamjang tofu with edamame puree and roasted miso, as well as the pole beans with kimchee, peanut and cilantro. Though kimchee, a traditional fermented Korean side dish made of vegetables, can be prepared with a variety of seasonings, it generally tends to carry a kick. 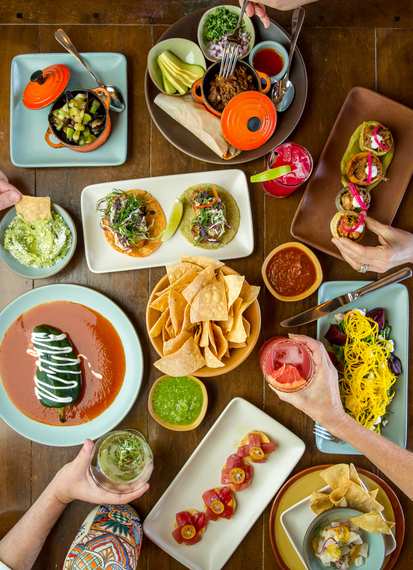 From the jalapeno crema on the carne asada tacos to the tomatillo and habanero salsa on the braised pork carnitas, the dishes at Mexican eatery Copita in Sausalito, just north of San Francisco, are packing a punch. 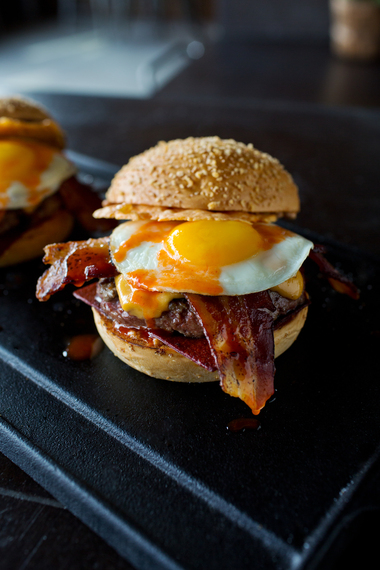 One of many tasty burgers on the comforting American menu, the chef's favorite burger at Plan Check is prepared with cheese two ways, bacon two ways, the restaurant's signature ketchup leather (dehydrated ketchup strips), a sunny fried egg and hot sauce. Though Tabasco sauce is the earliest recognizable brand in the United States hot sauce industry, appearing in 1868, there are a myriad of brands now on the market since the spicy, chili pepper condiment took America by storm years ago. 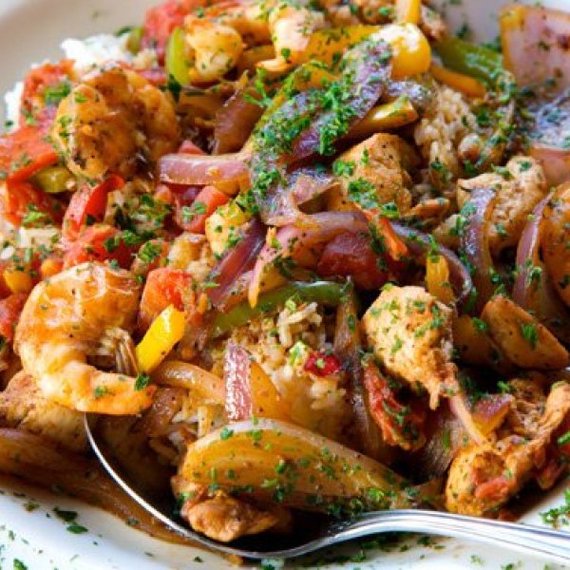 A beloved dish in Cajun country, the gumbo at Tupelo consists of smoked andouille sausage (a spicy, heavily smoked sausage made from pork chitterlings and tripe), pulled chicken and fresh okra. 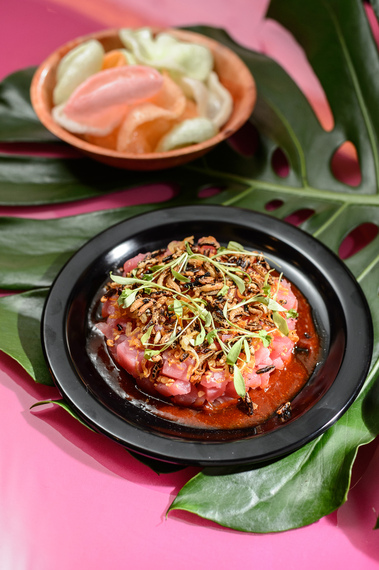 Photo provided by The Lucky Bee.

Essential ingredients in Thai fare (known to be one of the hottest cuisines) include curry paste as well as fresh and dried chile peppers. The tuna tartare at The Lucky Bee lives up to the cuisine's reputation, making for a spicy small plate prepared with roast chili, shallot, lime and popped wild rice. 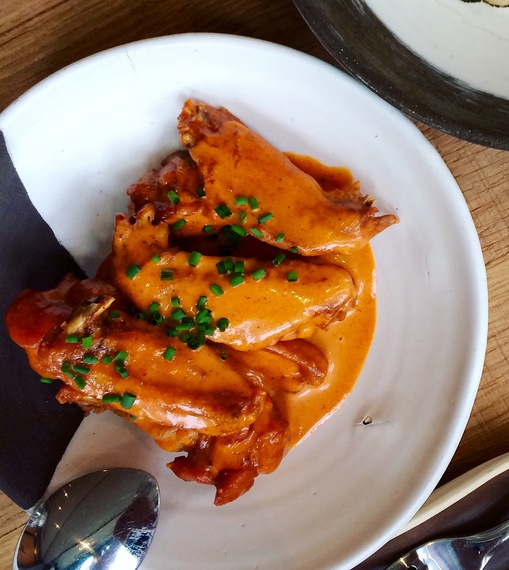 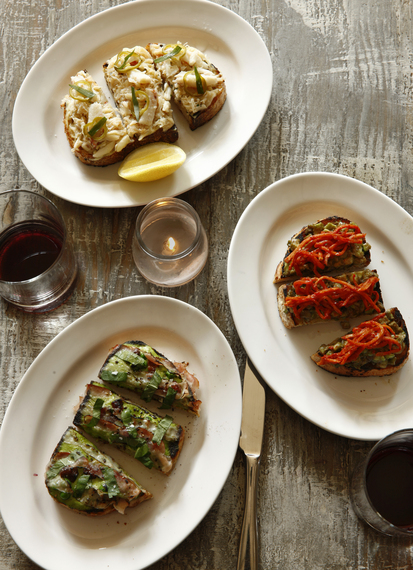 Even for spice lovers, a tour of the toasts is a must at Vernick, a New American eatery serving lightly grilled sourdough slices with eight inventive ingredient combinations, including avocado with spicy radish and beef tartare with fresh horseradish. 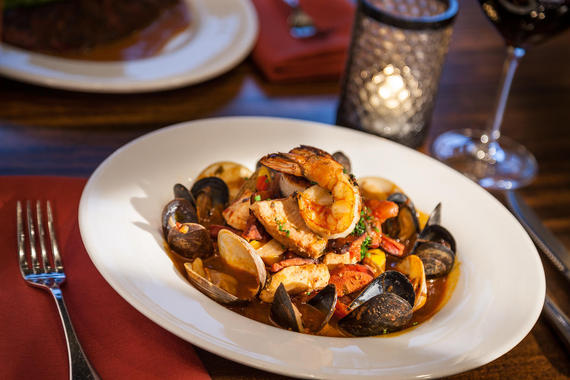 Getting its heat from fresh red peppers like Fresno or serrano chiles, plus red pepper flakes, a spicy, brothy bowl of the Portuguese Fisherman's Stew with shrimp, scallop, clams, Maine mussels, white fish, chorizo, peppers and onions will make you feel right at home no matter the season. 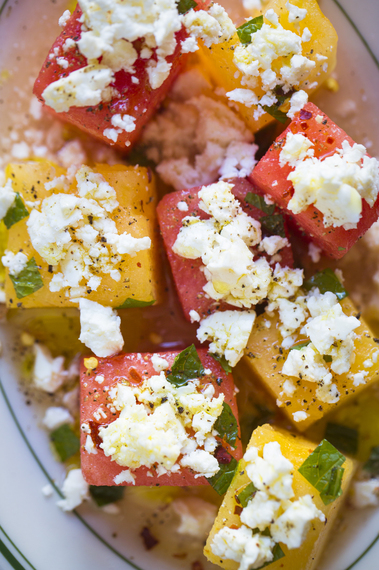 Seasonally available at Pizzeria Delfina in Palo Alto and Burlingame, the crazy melon salad features an assortment of the summer's best melons tossed with chili (where you get that kick!), mint, extra virgin olive oil and feta. 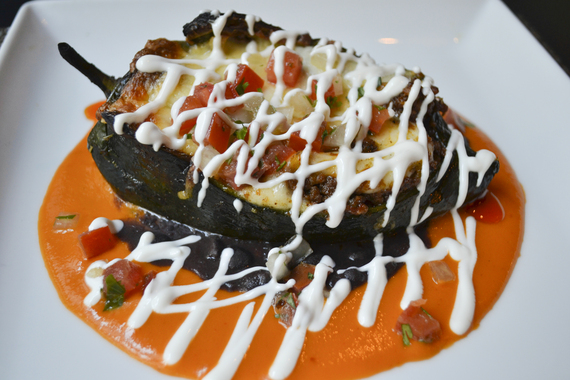 The chile relleno is stuffed with shrimp, chihuahua and oaxaca cheeses, and roasted tomato-chile de arbol salsa. The quintessential red salsa can range in spice level depending on how many potent, tree-like Mexican chili peppers, known as chile de arbol, are used. 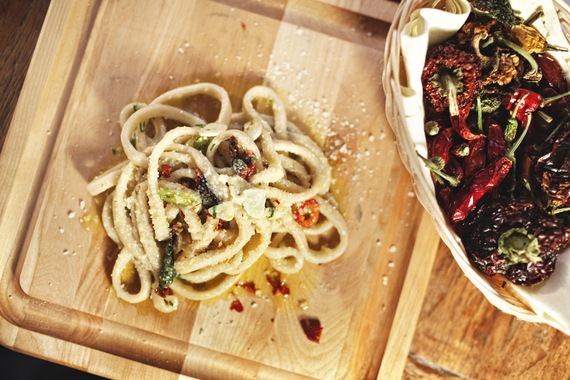 A popular dish in Southern Italy, the maccheroni alla mugnaia at Le Virtu is prepared as one 60-foot single-strand, a hand-pulled piece of pasta with garlic, extra-virgin olive oil, hot pepper and pecorino. 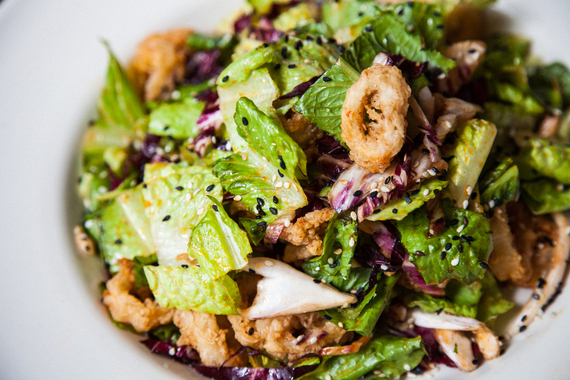 Adding a punch to the fan favorite dish, Ditch Plains serves its calamari with spicy aioli, typically made from mayonnaise, Sriracha, paprika, garlic, lime zest and juice and a pinch salt. A good match, Sriracha is frequently used as a dipping sauce for seafood. 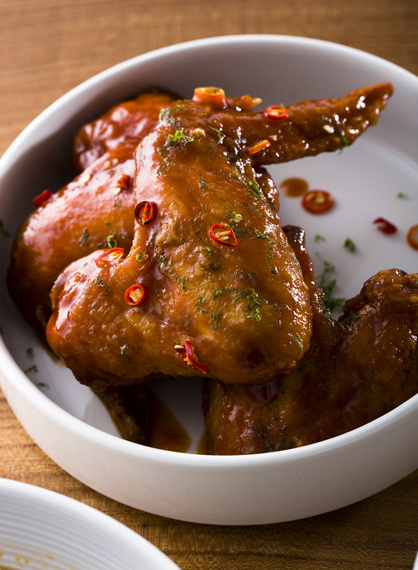 
Living up to its namesake, the pretty hot wings at Thai restaurant Kin Khao are prepared with Nam Pla fish sauce, garlic marinade, tamarind and Sriracha glaze. Sriracha is very popular in Thai cuisine, having originated in the Chonburi Province of eastern Thailand in the 1930s. 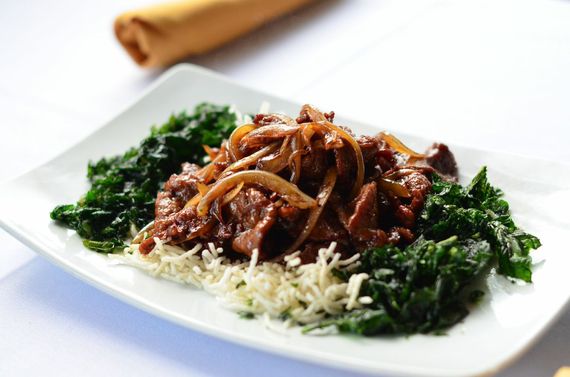 A popular dish in Chinese-American restaurants, Mongolian beef is quickly tossed with onions and scallions and typically prepared with Hoisin sauce, soy sauce and chili peppers to give it a kick. 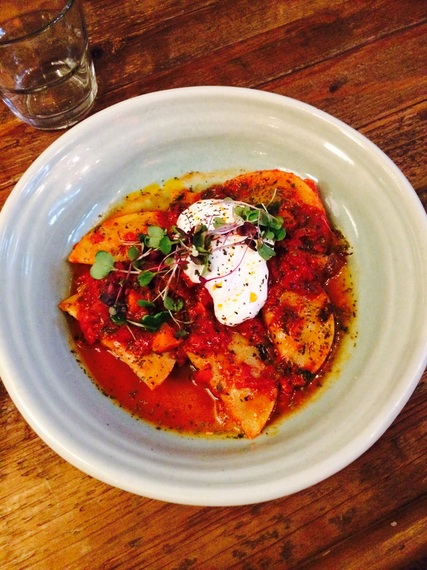 The lamb bolognese at Juniper, made with handmade saffron pappardelle, roasted tomato sauce and yogurt, is given a nice, warm flavor with the addition of chili oil, a common ingredient added to the Italian dish on a Mediterranean menu. 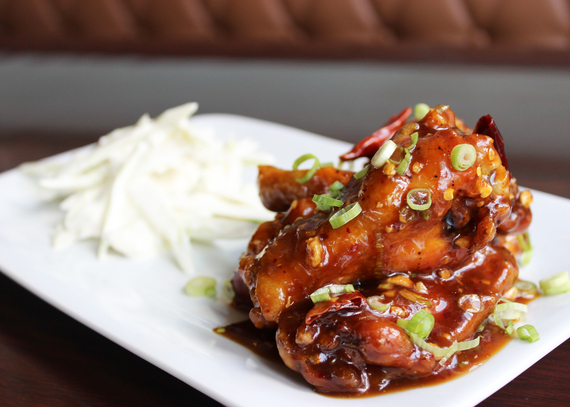 Whether you prefer medium spice or heavy spice, Whetstone delivers, offering its chicken wings in either a bourbon-infused hot sauce or a kung pao sauce with mild, Asian-inspired flavors.

You might also like:
15 Sausage Dishes to Take You Around the World
Go Greek in Honor of the 2016 Olympic Games: 8 Greek Foods to Know
The Backstory and Basics of the Bloody Mary