A beautiful gem or a scientist's dream? You can have both, as researchers in Mexico recently discovered after finding the remains of a 23-million-year-old lizard fossil, well preserved with soft tissue samples, in a small piece of amber.

Amber often contains small remains of plants and animals, but it is rare to find complete vertebrates such as this lizard.

While it's currently too early to confirm the small lizard's species, preliminary examination suggests the important specimen might be a new species belonging to the genus Anolis. This means that the little guy may provide an invaluable opportunity to learn more about an evolutionarily important and impressively adaptive species.

After all, Anolis lizards have fascinated scientists for years, and have provided researchers with an on-the-ground look at evolutionary processes at work. In 2012, a study involving brown anole lizards in the Bahamas was heralded for its documentation of natural selection, according to LiveScience.

Considered an example of evolutionary diversification, the Anolis genus includes several hundred different species that live across the Neotropics, Nature notes. The lizards thrive in warmer climates and are often outfitted with large finger and toe pads, which help them climb over a variety of surfaces quickly and efficiently.

The Mexican fossil was found a few months ago in Simojovel, an area of the Mexican state of Chiapas well known for its amber deposits.

The trapezoidal piece of amber is only about 1.7 inches by 0.5 inches, but it contains "a complete and articulated animal that also preserves remains of soft tissue and skin," Francisco Riquelme of the National Autonomous University of Mexico's Physics Institute told Spanish international news agency EFE.

Chiapas' Paleontology Museum director, Gerardo Carbot, dated the remarkable fossil back 23 million years through an examination of the translucent, honey-colored amber that encased it, EFE reports. The lizard is now on display in Chiapas' Amber Museum, located in nearby San Cristóbal de las Casas.

As the BBC notes, amber is formed when resin from a plant fossilizes after becoming buried in sediment. The substance can be a gold mine for archeologists and paleontologists.

In large enough quantities, the viscous substance can trap small creatures, insects and even types of fragile flowers. But even when this does happen, to find a specimen this old with soft tissue remaining is rare, according to the Associated Press.

The amber of Simojovel has contained valuable samples in the past, according to Popular Science -- including a pair of fossilized flowers that will be presented during this year's international Botany Conference at the end of July. 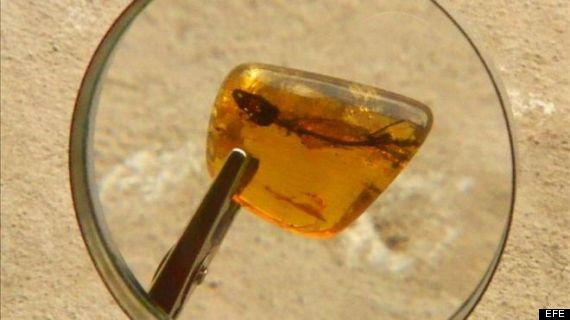