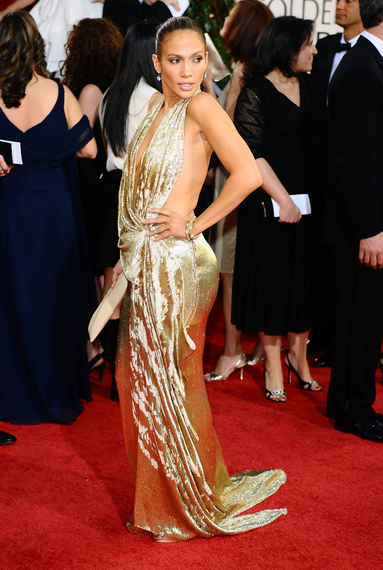 There is hardly a female erogenous zone that hasn't been celebrated in art, poetry, and fashion--the bum included. The most fascinating numbers about one of history's most prized assets.

2002: Year Duke University scientists discovered the gene mutation that results in enlarged posteriors on some sheep; they named the animals callipyge sheep.

28,000 B.C.: Estimated period the Venus of Willendorf, a small statue with a large bottom, was created in Austria.

570: Estimated number of works by Peter Paul Rubens. The Flemish Baroque artist had an affinity for painting full-figured women, and his name gave rise to the term Rubenesque.

1870s: Decade bustles--steel hoops that give volume to the back of a woman's skirt to make her waist appear smaller--became fashionable throughout Europe.

1919: Year surrealist artist Marcel Duchamp painted a mustache and goatee on a reproduction of the Mona Lisa for his piece called L.H.O.O.Q., a play on words meant to sound like the French phrase "elle a chaud au cul," which roughly translates to "her ass is on fire."

24: Number Queen's "Fat Bottomed Girls" reached on the Billboard Hot 100 chart in 1979. The song was later used in the opening credits of Morgan Spurlock's 2004 documentary Super Size Me.

1992: Year Sir Mix-a-Lot wrote "Baby Got Back" after watching a Budweiser Super Bowl commercial that featured women who were "shaped like a stop sign."

22: Years after releasing the hit song that Mix-a-Lot revealed the line "got it going like a turbo 'vette" was inspired by Jennifer Lopez, a dancer on In Living Color at the time.

19.6 million: Number of views the music video for Nicki Minaj's "Anaconda," which samples "Baby Got Back," in its first 24 hours online.

16,000: Number of women in a 2007 study that found that those with a greater hip-to-waist ratio had higher IQs than less-curvy women. Their children also scored higher IQs, perhaps because the fat stored around the buttocks and thighs is high in omega-3 acids, which help a baby's developing brain.

1998: Year the Ivory Coast prohibited public performance of mapouka, a traditional tribal dance, dubbed "the dance of the behind," that's been cited as the inspiration for the bump and twerking.

2013: Year "twerking," defined as "a dance or dance move involving thrusting hip movements and a low, squatting stance," was added to the Oxford English Dictionary.

2010: Year Jean-Léon Gérôme's The Snake Charmer, a painting prominently displaying a naked butt, was shown at the Musée d'Orsay in Paris, marking the first time the work had returned to France since 1880.

9: Number of backup dancers who wore black thongs and a coat of fine gold glitter to perform with Beyoncé at the 2014 Video Music Awards. Collectively, it took about three hours to apply the glitter to the dancers as they lay on the floor.

59: Percentage of Argentine men who said they were more attracted to butts than breasts in a 2013 University of Buenos Aires study.

45.5: Degree angle of a woman's spine--which lifts her butt and make it appear larger--preferred by male subjects in a 2015 study published in Evolution and Human Behavior. Researchers noted, "Men who think they like big bottoms may actually be more into spines."

25: Number of butt dimples that can be treated in one hour by Cellfina, a device that cuts away at cellulite under the skin with no bleeding and minimal bruising--at a cost of $3,000 to $6,000.

84: Age of acclaimed news anchor Barbara Walters in February 2014 when she did a workout including squats and donkey kicks on The View, guided by Selter.

$79: Base price per person for the Metropolitan Museum of Butts tour offered by the group Museum Hack. The website's description reads, "This tour focuses on over 6,000 years of butt history and looks at the enormity of the Met's collection through the lens of butts and all things butt-related."

More from Allure:
Find the Best Haircut for Your Face Shape
7 Weird Tricks for Looking Great in Photos
The 10 Best Drugstore Mascaras Under $20
The 6 Prettiest Haircuts for Long Hair
Celebrity Hairstyles That Will Make You Look 10 Years Younger
51 New Hair Ideas to Try in 2016