The brilliant and highly decorated science fiction author Kim Stanley Robinson has published an expansive new novel set in the near future, entitled 2312. In this visionary portrait of a possible future, humanity has spread throughout the solar system in the great diaspora. On Mercury, a city rides the rails in constant motion, moving ahead of the day/night terminator, a multitude of asteroids have been hollowed out for farming, species preservation and habitats, all of the planets and larger moons colonized. In space, all limits and boundaries are pushed back -- way back.

2312 finds old Earth, the "sad planet," dramatically changed by an 11 meter sea level rise and the ravages of climate change. The relentless, virtually unrestrained quest for material wealth created by capitalism, endless conflicts over resources both large and small and a population of over ten billion all exceed the planet's carry capacity by a significant amount. Fueled by the sustained domination of the vast majority of the planet's population by a privileged few, fear and economic servitude oppress the Earth's population, yet Earth remains humanity's homeworld and must be dealt with. Continuing in the grand tradition of science fiction, in this imagined future the ill consequences of continued technological and scientific achievement stay one step ahead of their destructive potential. By managing in the end to avoid total apocalypse, human civilization expands off planet, giving rise to a diverse civilization with room to grow. 2312 is a thrill ride of wonder, discovery and exploration of the human struggle to understand our relationship to each other and the environment in which we live.

Robinson's timing and prescient writing are spot on. In the real world, the past few weeks have seen the first successful launch of a private space rocket to the International Space Station by SpaceX led by Elon Musk, new peer-reviewed scientific studies confirming the possibility of accelerating ice loss from the Western Antarctic Ice Sheet (WAIS), and continued global rise in record temperatures and CO2 emissions. New reports from remote sensing stations in Alaska are now reading CO2 levels in the atmosphere of 400PPM, an alarming new high. Record droughts are steadily increasing in number, intensity, and duration across the globe. Extreme weather events predicted by ever more sophisticated global climate models confirm to a high degree of confidence the direct relationship between them and anthropogenic climate change. There is even a new app for seeing these events as they occur, Xweather. Leading climate scientists, particularly those advocating a stronger role and direct input into policy decisions are now affirming that some of these extreme weather events are in fact directly attributable to a warming climate, a clear and dramatic shift from the past.

Robinson extrapolates from present day reality to create a plausible scenario of what human civilization might look like in 300 years. In 2312, the world's beaches have all succumbed to rising seas, coastal cities are underwater, likewise small island nations and Florida, and billions have perished. On the upside, New York has become the new Venice, with water ferries replacing buses, the signature city adapted into an amazing metropolis of canals and skywalks. Robinson writes of "the great flood becoming a fortunate fall." Elevators provide constant access to space, sending rare earth materials (especially soil) up and food down. A critical amount of foodtsuffs for Earth are grown off-planet and it is in space where humanity flourishes. After having escaped the deep gravity well of Earth, humanity colonizes the solar system, reinventing what it means to be human in every regard as it does. From longevity to art to recreation to religion to sex, the possibilities and Robinson's exploration of them are a sweeping revelation.

I spoke to Kim Stanley Robinson by phone.

JC: Just this week reports are coming in from remote sensing stations in Alaska that CO2 levels are now at 400PPM. Do you think it is too late at this point to stop a two degree temperature rise this century? Are we past that or do you think it is still attainable?

KSR: I do not have the expertise to make that judgement. My impression is that holding to a two degree rise would be a success and that it is still within the realm of possibility. This is impressionistic from the point of view of an english major. There is a climate scientist at the University of Illinois who sends me a google alert on anything that has to do with climate, so I do see five to ten articles a day -- every day -- so I feel like I am informed, but I am not a climate scientist. I recently ran into Amory Lovins, who wrote Soft Energy Paths. Reinventing Fire is the latest book from his Rocky Mountain Institute, and he was full of good news and good developments in that just the ordinary workings of the pricing system might tilt in favor of clean energy in a way that will be extremely helpful so that you don't need universal altruistic political action. It can be a matter of supply and demand with clean energy being cheaper and conservation as being much cheaper. So he was encouraging, and I haven't run into an encouraging word in quite a long time.

JC: There is one bit in 2312 where you write that an intentionally designed collpase of the biospere might actually be the lesser of two evils. What are your thoughts on that?

KSR: I feel like there are essentially free market fundamentalists for whom their religious beliefs are more important than reality itself. It was basically just a joke saying that some people would prefer to stick to their ideas rather than adjust to reality and say this is a mass extinction event.

JC: Another idea that I thought was interesting is Happy Space Sad Planet. Right now SpaceX is completing the first successful launch of a private rocket docking with the International Space Station and on its way back, do you think this will accelerate the privatization of space?

KSR: I think it does accelerate and show what is possible. At this point Elon Musk is doing a demonstration project. It's not making a profit and it will be a while before it does. The whole notion of the privatization and that you can make money up there -- a lot of it is a matter of doing science. I wish that we as a nation state and the world in general had a much more robust space program and that the Pentagon would get involved as a force for peaceful good, of course that's not its assignment. We and Congress should be aligning many billions to NASA. We really should have a robust launch vehicle of the kind that Elon Musk is developing, but I do think people are more interested in it if it is a public-utility type project.

JC: I think the other theme that has run through science fiction from Jules Verne on has been the idea that technology somehow manages to save us from ourselves, that the self destructive impulse is eventually won over by bigger and better things. Do you see that as continuing or a constant struggle that is never going to end?

KSR: More the latter for sure. We can and will develop much cleaner techs, much less damaging to the biosphere and that is definitely a good thing. We ought to be keeping in mind that the technology is not just hardware and machinery, it is also software. So you can think of languages of the technology and writing of the technology and the social justice of the technology in what social justice does is reduce impacts on the Earth because the most impact is from the poorest and richest people. It also reduces the rate of population increase because the moment there is justice you no longer have the growth rate you have in poverty stricken countries. So I think it is interesting that justice is another climate change technology that we have in the picture except for getting into this weird definition of technology as nothing but a silver bullet that we imagine might help. There's also Jevon's paradox that the better we get at efficiently using energy the more energy we use; so that and that machine technology improvements per se do not necessarily reduce our impacts because we immediately double down on how much we use.

It is important to de-carbonize but also important to make more horizontal the hierarchy of power and wealth. In other words, a world wide middle class that is modestly using resources by way of clean tech is the only real solution.

KSR: My book Is a strange portrait, like you say Happy Space Sad Earth. Science fiction is always a metaphor for the current moment, at least it often is when it is being used fully. So you could say in a way that 2312 is just a way of portraying what exists right now in that the most affluent say 5 percent or 10 percent of the Earth's population might as well be living in space -- they are feeling as protected as if they are already living in space. Like whatever happens to the Earth won't really affect them, they are so wealthy. It remains crucial to pay attention to Earth, it remains at the center of the story, as my novel keeps saying, and unless Earth's problems are solved space is just irrelevant and a playground for people who are not paying attention to the big picture.

The dice may be loaded, but It is far from certain that the climate-changed world depicted in 2312 will come to pass. Millions are working to effect the changes needed across the globe in ways both large and small, witness the outstanding work of Bill McKibben and 350.org. Each day brings an increasing sense of urgency to these efforts as the science continues to confirm what until recently were worst case scenarios. As Dr. Ira Leifer said earlier this week, new greenhouse gas data from NASA's remote sensing satellites confirmed by ground observation is "scary." To continue with business as usual could result in a sixth massive extinction event (some say it is already well underway) and severe consequences for human civilization. It would seem that the time has come to commit to the stars and embrace the vision offered by Robinson in 2312, or make the changes necessary to ensure the life support systems and biosphere on Earth are stable and protected for generations living now, and those yet to be born. Better still -- do both. 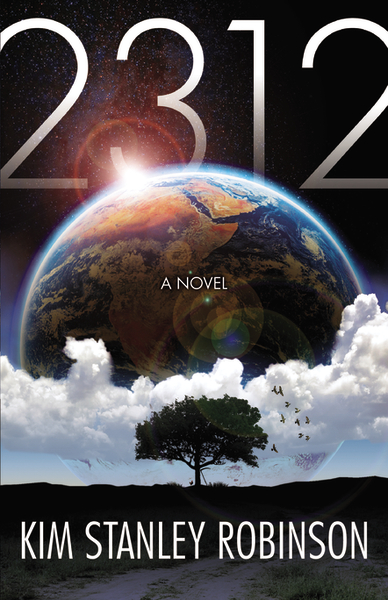