The U.S. Patent and Trademark Office (PTO) this week awarded a patent on "gamete donor selection" to 23andMe, the genetic testing company that sells at-home DNA kits directly to consumers. Patent #8,543,339 grants 23andMe exclusive rights to genetic and computer technologies that would enable prospective parents to handpick a sperm or egg donor with whom they would be likely to produce a child born with certain traits that they desire.

It's not just couples already planning to have a baby together who can use the patented technology to learn the likelihood that their child will inherit certain "phenotypes of interest in the hypothetical offspring." The patent also covers genetic selection from among a broader menu of options by predicting how a person's DNA would combine with any number of available donors to produce a child of a particular type. The patent illustrates: 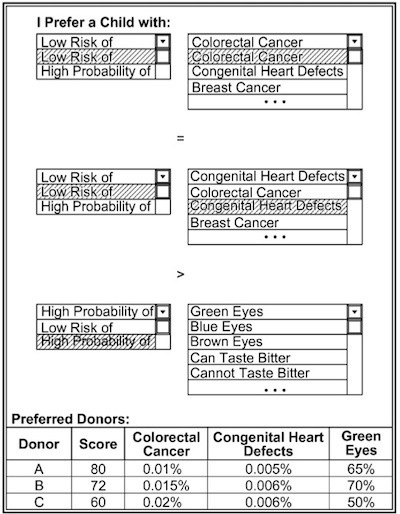 There's much to be said for 23andMe's mission to empower people with genetic information about themselves and their potential children. And what mother or father doesn't want to give his or her child the best chance of leading a happy and successful life? Besides, sperm banks already provide an array of donor information, ranging from medical history, ethnic origin, and facial features to baby photos, personal essays, and SAT scores.

What's unique about the patented technology is that it analyzes DNA from other individuals together with a person's own to identify "a preferred donor" with whom 23andMe claims the person would be most likely to have a child with the traits that he or she preselects.

The use of this technology to avoid debilitating disease or disability would be cause for celebration. And because the technique allows trait selection even before a child is conceived, it doesn't implicate controversial questions about the moral status of the embryo or fetus. The patented technique is in this sense like that offered by another genetic testing startup called GenePeeks, whose DNA analysis lets sperm bank clients choose donors with whom they wouldn't pass along certain inheritable diseases.

The 23andMe patent goes beyond medical conditions, however. It facilitates parental choice among a range of non-health related traits, including sex, height, weight, eye color, "personality characteristics" like warmth and a sense of humor, and the kind of "muscle performance" that would help make a person a better endurance athlete.

23andMe makes clear that traits such as intelligence, athleticism, and impulse control cannot be predicted with any precision or confidence. That's because complex traits like these develop through the interplay of heredity and environment, and even their genetic contribution is a function of multiply relating genes. However well 23andMe informs its consumers that offspring design is an illusion, its patented technology is unsettling.

Among other objections I've considered is this: high-tech genetic matchmaking suggests parents' unwillingness to accept a significant departure from whatever a child's endowment might occasion. The greater specificity with which parents expect their offspring designs will be achieved, the less open they reveal themselves to the possible contours along which their child's life may unfold. The patented technology, by encouraging parents to choose this particular child for just the right characteristics, threatens to crowd out our acceptance of children, as they arrive to us, with our desires for what we hope them to be.

23andMe has denied that it intends to use its patented technique as anything more than an engaging way for customers to preview trivial traits like lactose intolerance and earwax composition their child might inherit. When the company filed the patent in December 2008, "there was consideration that the technology could have potential applications for fertility clinics," 23andMe explains on its blog, but the company says it "never pursued the [donor selection] concepts discussed in the patent" and doesn't "have any plans to do so." If its designer baby technique generates as much consumer demand as I've predicted it will, however, the company will have a hard time giving up the profits that its patent promises.

Even if 23andMe doesn't bring its donor selection technique to market, there's still reason to resist granting such patents in the first place. Patents do more, after all, than incentive innovators to disclose their inventions to the public. When the government confers a patent for a particular invention, it implicitly approves of that invention as an object worthy of exclusive rights. A patent award sends the message that this is an invention whose development should be protected and promoted.

The utility standard in patent law requires that a patented invention be "socially beneficial." That requirement once contained a morality condition that rendered ineligible for patent protection inventions whose sole use was deemed "injurious to the well-being, good policy, or sound morals of society." But this morals dimension of patent law's utility requirement has more recently fallen out of favor. The PTO expressly rejected the argument that "patents should not issue for [human] genes because the sequence of the human genome is at the core of what it means to be human," and the Supreme Court declined even to consider such morality-based arguments in last summer's gene patenting case of Myriad Genetics.

Congress should consider amending the patent law to appoint "ethics representatives" to the PTO. Its present staff, given their alternative professional backgrounds and competing professional responsibilities, cannot reasonably be expected to account for the relevant methodology and literature. But qualified experts could equip the PTO to enlarge the range of arguments that it draws upon to determine whether an invention serves social utility.

Among the arguments for 23andMe's donor selection technology would be the moral goods of parental liberty in reproductive decision-making and the promise of producing future generations who are more likely to have their lives go well. The least that our patent law can do is to consider the balance of such arguments for the innovations we seek to promote.

Dov Fox is Assistant Professor of Law at the University of San Diego School of Law. His research considers the way that law adapts to advances in science and technology.