Writer Peg Streep is writing a book about the Millennial generation and she routinely sprinkles great data into her posts at Psychology Today.

First, students have generally higher demands on the world; they are as likely or more likely than workers to say that a wide range of accomplishments are "important or essential to [their] happiness": 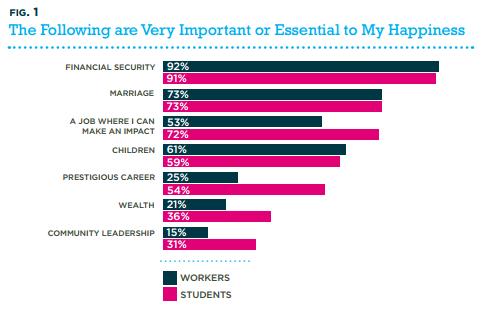 In particular, students are more likely than workers to say it is important or essential to have a prestigious career with which they can make an impact. More than a third think that this will happen within the next five years: 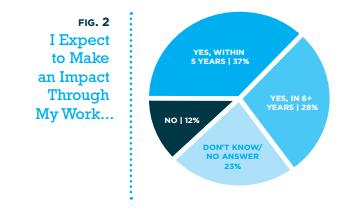 Wealth is less important to students than prestige and impact. Over a third say they would take a significant pay cut to work for a company committed to corporate social responsibility (CSR), almost half for a company that makes a positive social or environmental impact, and over half to align their values with their job:

Students stand out, then, in both the desire to be personally successful and to make a positive contribution to society. 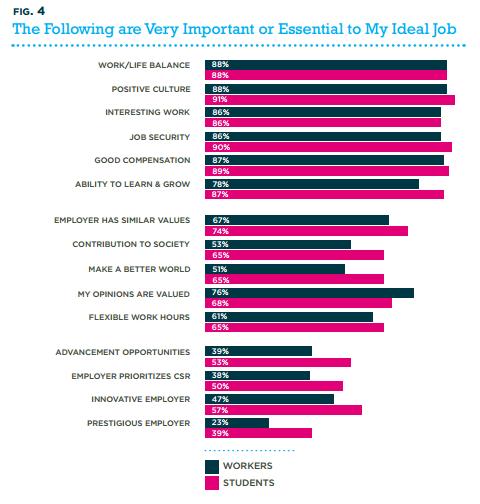 At the same time, they're cynical about other people's priorities. Students and Millennials are far more likely than Gen Xers or Boomers to think that "people are just looking out for themselves."

This data rings true to this college professor. Despite the recession, the students at my (rather elite, private, liberal arts) school surprise me with their high professional expectations (thinking that they should be wildly successful, even if they're worried they won't be) and their desire to change the world (many strongly identify as progressives who are concerned with social inequalities and political corruption).

Some call this entitlement, but I think it's at least as true to say that today's college youth (the self-esteem generation) have been promised these things. They've always been told to dream big, and so they do. Unfortunately, I'm afraid that we've sold our young people a bill of goods. Their high expectations sound like a recipe for disappointment, even for my privileged population, especially if they expect it to happen before they exit their twenties!

Alternatively, what we're seeing is the idealism of youth. It will be interesting to see if they downshift their expectations once they get into the workforce. Net Impact doesn't address whether these are largely generational or age differences. It's probably a combination of both.