He is only 3 years old. But before I blink, my son will be analyzing my bungles. So, Doc, I kindly respect your cancelation policy and hypnotic white noise. But hear this: If you turn my son against me, I will find you and I will destroy you. Here are 25 complaints he will undoubtedly have...

That is so unfair. I graduated with honors, you know. But we owned a million thermometers, and none of them worked. So either you had no fever, some fever or lots of fever.

2. I grew up in a cluttered mess pile.

You mean the overflowing boxes of Legos, Magna-tiles and Lincoln Logs? I may still have a crate labeled "RANDOM MISC. CRAP" -- you and your therapist can take a crack at it!

3. She never let me sleep out.

While you had visions of refined sugar and video games, I worried that you could have a meltdown and I'd need to pick you up at midnight.

Fine. But your good spirits did. At least I didn't tell you the park blew up like your friend's dad did.

5. I'm wearing the same clothes in every picture.

They're clean, so hold the dramatics. When a shirt worked, I ordered 10. We let your personality shine for itself.

6. They never let me watch TV.

Boo hiss. The other toddlers at the park talked Dora and you couldn't add your two cents on plot development? You lived. For years, Elmo was a furry guy who existed only on T-shirts. When you finally saw him walk and talk, you practically sh*t yourself.

You must've wanted that Perfect Mother down the street who was up all night blending kiwi, spinach and mint. I have news for you: She also guzzled Chardonnay from her SoulCycle thermos.

8. She lied about having "meetings," and instead went on dates with my father.

An appalling betrayal. Remember when I did your bath in full makeup; wild, un-pony-tailed hair and colorful clothes unlike my standard black yoga pants and nursing tank? Turns out DADDY AND I DID NOT HAVE A MEETING! BWAH-HA-HAAA! WHO HAS MEETINGS AT 8 P.M.? Daddy was getting me a VERY strong drink! Probably TWO! And OYSTERS -- SIX just for ME! And a JUICY-ASS STEAK! AND THAT'S PROBABLY WHAT LED TO US CONCEIVING YOUR BROTHER!!

Remember, he's the only other bug who knows how nuts your parents are.

10. Those frozen treats were NOT ice cream.

Did the frozen yogurt kill you? Grandpa grew up in a cold water flat on the Lower East Side with eight siblings. He would have sold one of them for that organic kefir. Simmer down.

11. She pretended that everyone was going to bed just to get me to sleep.

We've already established I am a liar. Next.

12. My stuffed monkey had 35 secret brothers hidden in a drawer.

The Simian expansion began when you contracted a virus causing you to expel fluids in all directions. During a heated night debate over crib change #3, Daddy barked, "BUY MORE MONKEYS IMMEDIATELY!" So Monkey pushed elevator buttons, cleaned subway poles and flushed toilets. But luckily, Monkey had 35 loyal brethren who subbed in for him when we returned home.

13. The other kids drank juice boxes.

You were content with water, chamomile tea or milk until your toddler art teacher served those cartons of sugary grape crap.

14. She was always pushing natural remedies on me.

Poor little bug. Mama wanted to avoid stuffing your colon like an oversized carry-on. So if I heard raw onion loosened mucus, you bet your Arnica we tried it.

Your nursery sounded like a synthesized rainforest. But it had sufficient tonal variation, as your pediatrician suggested.

16. There's a world after dark, and I was deprived of it.

Fireworks should take place in daylight, what can I say? Routine was the name of the game. Besides, I had a date with a glass of red at 7:05 and your father by 7:30.

Thanks to our trusty baby monitor, your life has been one big Truman Show. Wave to camera!

18. BOOBS. She enabled my obsession... Then weaned me.

You got two years of golden nectar! When we saw that lady with the huge knockers at the bagel place, we both looked. But I looked away, and you reached toward. So you may have some work to do in this area.

19. She posted my pictures online without my consent.

True, but I never shared your bits and pieces.

To get obnoxious telemarketers to remove me from their lists, I may have screamed that I had two small children and SOMEONE IS GOING TO PAY! Radio silence.

21. All of her prayers that I would suck at football cursed me.

22. She was constantly washing my hands/attacking me with sanitizer.

There are colds, and there are ManColds. You took after your father here. Mama would get sick and move on. You dragged the whole house down with you.

I refuse to dignify this with a response.

24. She loved my brother more.

I refuse to dignify this with a response.

25. She loved me more than my brother.

You boys are only 3 and 1. What'll happen when long division and dioramas come into play? Then your friends will have iPhones and flashy cars, but Mama won't drink the punch. Look, I'll do my damnedest to give you lots to tell Doc without causing too much permanent damage. It's all about balance. Give me some credit -- I have had my therapy. 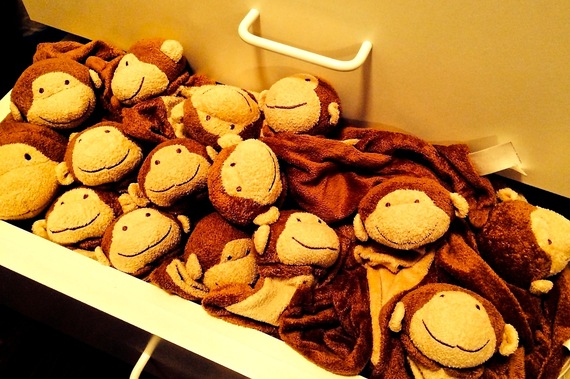 Back-up Monkeys: "Free us. We've been here the whole time."

Leyna Juliet Weber is a Mother/Writer/Actress in that particular order. She is the Co-Founder of WorkingBug.com and lives in Los Angeles with her husband and two small sons in a home that consistently looks vandalized. www.SeeMomWrite.com

More:
Sibling rivalrylying to childrenhand washingbaby monitorhand sanitizer
Newsletter Sign Up
Raise the kind of person you'd like to know
Subscribe to our parenting newsletter.
Successfully Subscribed!
Realness delivered to your inbox

Mother of 3/Writer/Actress (in that particular order)