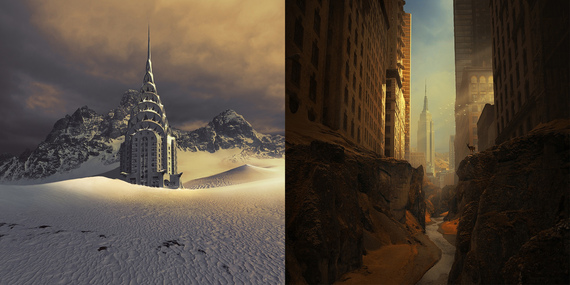 Born in Warsaw, Poland, artist Michal Karcz began his visual journey with a paintbrush and canvas. As a painter, he says he developed "a vision that was hard to create with other visual techniques"--a vision he eventually brought to photography and digital art when those became his medium of choice later in life.

Moody and dramatic, his imagination and formidable Photoshop skills produce "unique realities" the he says represent "places from my dreams, desire, imagination, and fears."

Wherever they come from, they are spectacular. Detailed wide-angle shots of 'parallel worlds' devoid of humanity, reclaimed by nature... or aliens... or darkness itself.

As for his inspiration, Michal writes:

I can tell that music has the biggest impact on my work. It's an inseparable element with pictures in my mind, a kind of sound illustration to a visible scenery. These two things hit me with the strongest intensity.

Scroll down to see a collection of our favorite images from his portfolio:

To see more from Michal, be sure to follow him on 500px, check him out on Facebook, or show him some love on DeviantArt.

This article was originally published on the 500px ISO blog.