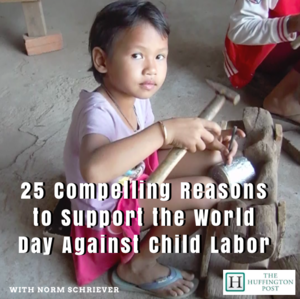 I've traveled all over the world and from Nicaragua to Cambodia, Egypt to The Philippines and many countries in between, I've witnessed the cruel reality of children working long days and nights, often under harsh and even dangerous conditions.

Many of these kids are obligated to work to help their poor families; other times, they are on the streets and have to fend for themselves to survive at a very young age; and too often, children are forced into dangerous work for little or no pay - even as soldiers or sex workers.

According to the International Labour Organization, child labor is defined as "work that deprives children of their childhood, their potential and their dignity, and that is harmful to physical and mental development."

1. The World Day Against Child Labor was officially launched in 2002 and observed on June 12 every year, aiming to bring awareness to the plight of child laborers all around the world and effect change. (Source)

2. According to International Labor Organization estimates, there are now about 168 million children engaged in labor across the globe. That's about the combined population of Australia, Germany and the United Kingdom, or almost one in every ten children in the world. (Source)

4. If you are shocked at the number of child workers, you're not alone. In fact, when surveyed, only about 1 percent of Americans guessed the number correctly, and 73 percent thought there were less than one million children working in the world. (Source)

5. However, there has been significant improvement in identifying and alleviating the conditions that foster child labor internationally. In fact, the number of working children has dropped one third from a 2000 high of 246 million. (Source)

6. Child labor among girls has been reduced 40 percent in that same span, compared to a 25 percent drop for boys. (Source)

7. Despite improvement, the issue of eradicating child labor should be a priority for all nations, especially when we consider that more than half of all working children - around 85 million - do some kind of hazardous job that directly impacts their health, safety, and moral development. (Source)

8. These numbers include children who are forced to take part in armed conflicts, either as child soldiers or kidnapped or sold as sex slaves or servants for soldiers and militia. According to the watchdog group Anti-Slavery International, there are approximately 300,000 child soldiers alone in 30 zones of conflict around the world. (Source)

9. It's estimated that children forced to work generate $150 billion a year in illegal profits. (Source)

10. About 59 percent of all working children - 98 million - work in agriculture, most often on farms that produce rubber, cotton, cocoa, coffee and other crops. (Source)

11. Child labor occurs not only in agriculture, manufacturing and textile production, but also in dangerous and even life-threatening jobs in construction, mining, armed conflicts, and sold into sex slavery in brothels. (Source)

12. But about 20 million child workers labor in factories and sweat shops, producing clothing and garments, rugs, toys, and even hand-rolled cigarettes and matches. (Source)

13. The region with the most number of child laborers is Asia and the Pacific, with almost 78 million working children, or 9.3 percent of their youth population. (Source)

14. But the region with the highest percentage of children in labor is still Sub-Saharan Africa, where about 21 percent minors are in the workforce, or 59 million. (Source)

15. In the Middle East and North Africa, 9.2 million children - or 8.2 percent of all children - are engaged in labor. (Source)

16. About 13 million (8.8 percent) children work in Latin America and the Caribbean. (Source)

18. It's not only far-off poor countries that utilize child labor. The U.S. saw widespread child labor a little more than a century ago. In fact, in 1900, about 18 percent of all American workers were under the age of 16. (Source)

19. In southern cotton mills, an astounding 25 percent of all employees were below the age of 15, and half of them twelve years old or younger. (Source)

20. Although the U.S. now has strict laws in place prohibiting child labor, there are loopholes - like the one that allows children to work on farms, whether that's for their families, for large tobacco companies, or in migrant labor. (Source)

21. U.S. watchdog agencies that are supposed to monitor workplaces and report child labor violations have seen their funding and manpower cut. For instance, OSHA had fewer health and safety inspectors in 2011 than in 1981, despite the fact that there were twice as many work sites to monitor. (Source)

22. U.S. consumers also perpetuate child labor practices through the brands we buy and companies we support. As recently as 2006, brands like Wal-Mart, Hanes, and J.C. Penney were exposed for employing hundreds of children as young as 11 at sweatshops in Bangladesh; forced to work gruelingly-long shifts with no breaks up to seven days a week, living in deplorable conditions, and sometimes even beaten or abused. Apparel made by other brands like Sean "P Diddy" Combs, the NFL, NBA, GAP, Disney, Nike and others have also been identified by The Institute for Global Labour and Human Rights as child labor offenders. (Source) 23. The majority of children aren't working for strangers, but put to work by their own families without pay. (Source)

24. It's estimated that only one out of every five child laborers are ever paid or compensated in any way for their work. (Source)

25. The benefits of ending child labor would outweigh costs by nearly six to one. (Source)

***No matter what the circumstances, being forced to work exacts a huge toll on these children's education, growth, and chance to escape the cycle of extreme poverty. While there's been marked improvement in awareness and reducing the number of child laborers in the last decades, we have a long way to go before every child actually gets a childhood instead of being put to work.

Email me if you'd like to find out what the average person can do to help eliminate child labor.