It seems like a blink-of-an-eye ago that I was watching "The Sound Of Music," just waiting to be "16 Going On 17." When I took a gap year abroad in between high school and college, my entire program sang "I'm gonna stay 18 forever" like it was our personal (only half-ironic) anthem. Now those awkward -- and thrilling -- teen years have come and gone. As of Tuesday, I've been around for a quarter-century. The big 2-5 is here and I can no longer claim to be in my "early 20s." I'm pretty sure I can glimpse 30 just over the horizon (or maybe that's just nearly-30 HuffPost Women Editor Margaret Wheeler Johnson, sitting at the desk next to me).

A lot happens between the ages of 18 and 25. I lived in a development town in Israel for a year with 62 of my closest friends, moved to Canada for university, spent four years knee-deep in academia and freezing cold winters, moved to New York City, started working in media, lost touch with some friends, made countless others, got my heart broken once or twice ... the list goes on. I would imagine that most people have their own lists of self-defining experiences -- and hopefully we all realized a thing or two (or 25) about ourselves along the way. (Case in point: I don't ever need to drink another Red Bull and Vodka.)

The following is a non-exhaustive list of things that I know to be true for myself -- and maybe for some other no-longer-in-their-early-20s women.

1. You're "not a girl, not yet a woman" -- and that's fabulous. Britney Spears was (loosely) right. There is such a thing as being in between adolescence and the more serious responsibilities of adulthood that come a bit later on. And it's pretty great. Embrace the in between time wholeheartedly before you have to worry about a mortgage, a spouse and children.

2. The fear of missing out is worse than missing out. It's impossible to do everything and see everyone and be everywhere at once, so there's no point in making yourself crazy over it. And once you throw the FOMO out the window and stop regretting the things you aren't doing, you can enjoy the ones you are a whole lot more.

3. "Just say no" applies to more than the drugs you might be offered in an after-school special. If you're really exhausted or just craving some alone time, it's alright to turn down the occasional party invite or after-work drink. Curling up in bed with a good book, doing some tidying or going to the gym and indulging in a little "Law and Order: SVU" while you're on the elliptical (not that I do that...) can all be as fulfilling as being social.

4. It's equally important to say yes against your better judgment once in awhile. Don't neglect your social life. Some of the greatest adventures occur when you stop trying to plan everything out. There's little more exhilarating than realizing that it's 5 a.m., you've been out and about for 10 hours and you're still not even remotely tired. You probably even have it in you to stop off at a 24-hour diner, sip coffee and split some 100 percent unhealthy curly fries with a friend.

5. Book clubs aren't just for old ladies or pretentious NYTimes profiles. Once you've been out of the academic world for a few years, you might actually start to miss all of those lectures, discussions of "structure" and arguments over prose. Book clubs are sort of academic, but they also allow you to read really awesome novels and drink a whole bunch of wine while talking about an author's possible misogyny. It's really a win-win.

6. Home decorating has a place in the in-between years. Your 20-something apartment likely isn't your "forever" home, but it is your home right now. Taking the time to put up some framed photos next to your grandmother's antique mirror and the movie poster you purchased in college is worth it. Your apartment doesn't have to look like a spread in Elle Decor to make it yours -- it just needs to contain some personal touches. (Plus, it's actually kind of fun to wander around home decor stores. Once I wandered into Bed, Bath & Beyond and came out with a popcorn machine. It's still one of the greatest purchases I've ever made.)

7. You don't have to be friends with everybody. Not everyone is going to immediately like you and you're not going to like everyone. Also, accept that not all of your friendships from high school and college are meant to stay as strong as they once were. Save your energy for the real thing. Those friendships are hard to come by and worth investing in.

8. You can stop judging yourself. Your body, your job and your love life might not be "perfect" -- in fact, it's a guarantee that they're not. But at a certain point you just have to realize that no one gives a sh*t nearly as much as you do about your "flaws." So take Nora Ephron's advice: put on that bikini and rock it the whole decade long. You'll thank yourself later.

9. Health concerns are real -- so address them now. Whether it's a pinched nerve in your neck, a poor exercise routine or anxiety issues, your mental and physical health will only get more complicated if you don't take care of yourself now. Join a gym, get a primary care physician and find a therapist ASAP.

10. Life's too short for bad sex. No one's going to read your mind, so figure out what you want in the bedroom and ask for it.

11. Life is also too short for a bad work environment. Advocate for yourself when it comes to what you're paid, the responsibilities you take on and whom you work with. If you don't go to bat for yourself, no one else will.

12. Retail therapy is totally fine once in awhile. No purchase is worth clearing out your bank account, but when you can and want to, let yourself splurge a little. There have definitely been times when a new pair of shoes lifted my mood more than an well thought-out discussion about my emotional state ever could have.

13. Your parents are pretty cool. You can enjoy them in your 20s in a way that you couldn't in your teens. Recognize that and choose to have fun with them instead of fighting with them.

14. Clothes don't make the woman -- but flattering ones can make a woman feel really great. A new outfit can make you feel fabulous (see: Melanie Griffith after she's raided Sigourney Weaver's closet in "Working Girl"), and there's nothing wrong with that. Plus, now is the time to rock those four-inch heels and mini-dresses (if you want to).

15. Your personality makes you sexier than any clothing item. I've never felt more attractive than when I'm having a good time with people who make me feel comfortable. People always say that confidence is a huge part of what makes someone hot, but I only really started to believe it once I got into my 20s.

16. Being selfish is important and necessary (to a point of course). Make yourself happy, or else no one else will be able to.

17. Being single is really awesome. You get a big bed to yourself, you can do whatever you want whenever you want without consulting someone else, and you're still at an age where a lot of other people are single too. I find that out of a relationship, I'm much more likely to get out of my apartment and try something new. Life can be fulfilling and fun without a romantic partner, and it's important to experience that.

18. Watching your friends get married is fun, even if you're single. At 25, if your social circle is at all similar to mine, you're right in the middle of the first wave of friend marriages. Embrace the open bar, open dance floor and newly-married couple at every wedding you go to. Don't worry about the fact that it's not your wedding -- after all, you're only 25.

19. It's OK to admit that you want a relationship. Admitting that you'd like to meet someone doesn't mean you're not independent and perfectly capable of getting along on your own. Also know that if you decide at some point that dating is a serious priority, you need to put some effort into the process.

20. Withholding your opinion accomplishes nothing. Being considerate of others' preferences and needs is obviously a good thing. But you have the right and responsibility to express yourself in any relationship -- romantic or otherwise. It's hard to stop being an "I'll do whatever" sort of person, but once you start asserting yourself people will respect you more for it. #SorryImNotSorry.

21. Doing things just for the story can be great. You'll probably end up getting a lot more than an anecdote out of the experience -- and even if you don't, you'll enjoy retelling said story for years to come. (Just don't seduce your boss. Thanks for that lesson, Lena Dunham.) So go on that potentially (probably) disastrous date, pull a non-school-related all-nighter and make out with that D-List celebrity. Glamour's famous "30 Before 30" list says that you should have a past "juicy enough" to enjoy looking back on. So get cracking.

22. Nothing feels better than being able to afford not just your necessities, but a few luxuries as well. Last February I went to Puerto Rico with one of my best friends. We paid for the trip ourselves and spent four days hiking in the rainforest, night kayaking, laying on a beach and getting thoroughly sunburned. It would have been fun no matter how we got there, but it felt fabulous going on our own dimes.

23. It's all right to change your mind about big things. This includes your job, your city and your life partner. Now's the time. Your life doesn't have to look the way you imagined it would at 18. It turns out, things rarely work out exactly the way you once thought you wanted them to anyway -- and that's usually a very good thing.

24. There's no point in being afraid of life after 25. I can't tell you how many people responded with "I'm so freaked out about turning 25!" when I told them my birthday was coming up. Besides the obvious fact that 25 is really young in the grand scheme of things, aging happens no matter how much you freak out. So why bother?

25. There's so much you don't know yet. And that's thrilling. 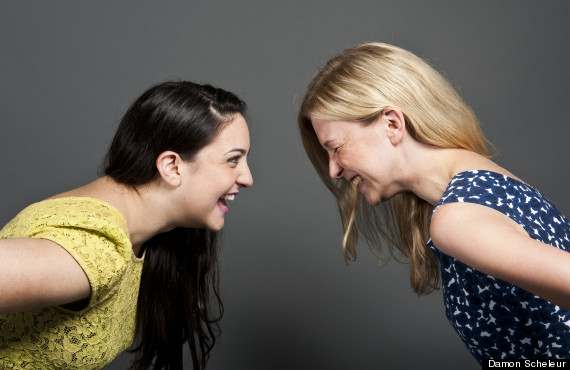 When in doubt about your age? Just laugh it off.